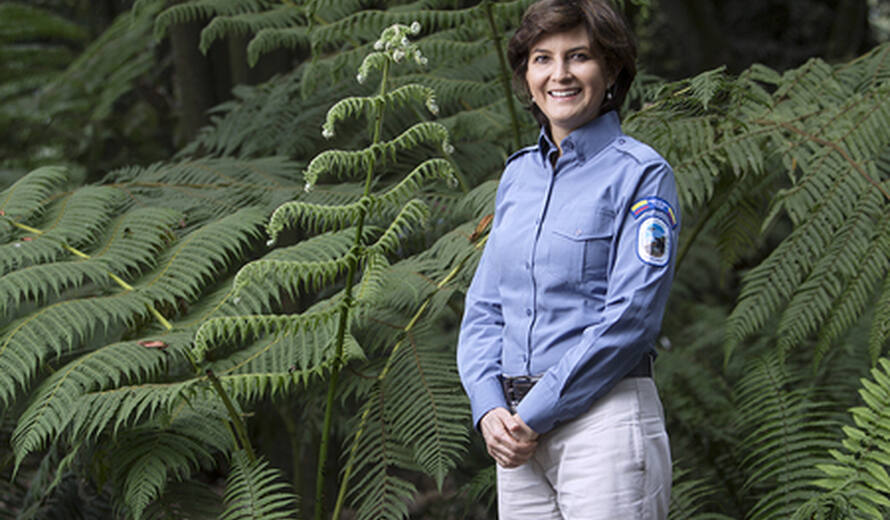 All four winners of the Award have all contributed in their own way to keeping the Amazon rainforest away from the critical 'tipping point'. The largest rainforest on earth stores billions of tons of carbon dioxide every year and contributes to the climate regulation of our planet and even has its own self-sustaining climate system. Since a large part of the precipitation in the Amazon basin comes from the water that evaporates from the forest itself, with a warmer climate, even more deforestation and increasing numbers of fires, the precipitation could decrease more and more, bringing the forest to a critical limit, the tipping point. The World Heritage List includes several sites situated in the Amazon rainforest, including:

Chiribiquete National Park – “The Maloca of the Jaguar” (Colombia)

Julia's work has been incredibly significant to ensure the Amazon Rainforest for future generations.  Under Julia’s leadership, Colombia nominated Chiribiquete National Park – “The Maloca of the Jaguar” (Colombia), adding a very significant part of the Amazon to the World Heritage List. If there is anyone in Colombia who has dedicated her life and full commitment to conservation and implementation of the 1972 World Heritage Convention, it is Julia Miranda Londoño. She also was instrumental in addressing the threats to Los Katíos National Park (Colombia), a densely forested area shared by Panama and Colombia leading to its removal from the List of World Heritage in Danger in 2015. Julia served several terms as a member of the World Heritage Committee, including at the 17th session held in Cartagena, Colombia in 1993. She wrote about Colombian World Heritage sites in the recent issue of the World Heritage Review on Biodiversity.

An environmental lawyer and passionate conservationist, Julia was the director of the Colombian National Park Authority from 2004 to the end of 2020. In her nearly 17 years there, she managed to significantly expand the network of protected areas in her country: 15 protected areas, together two and a half times the size of Switzerland, were created or expanded under her leadership, including Chiribiquete National Park. Fifty-nine national parks with an area of ​​313,000 square kilometers - more than 18 percent of the land area of ​​Colombia and 13 percent of the national marine areas - were under her leadership. At the end of her term in office she considered that she had not finished: ten more national parks, as well as the expansion of two of the existing parks, were still on her agenda.

“Flying over the Amazon is breathtaking because it is so huge. But I am even more overwhelmed when walking within it,” says Julia Miranda. As director of the Parques Nationales Naturales de Colombia (PNNC), she also had the opportunity to meet the indigenous people of this unique Amazonian world. “I had the great privilege to experience how their traditions and their culture have contributed to preserving the Amazon rainforest to this day.”

Watch the full ceremony below: