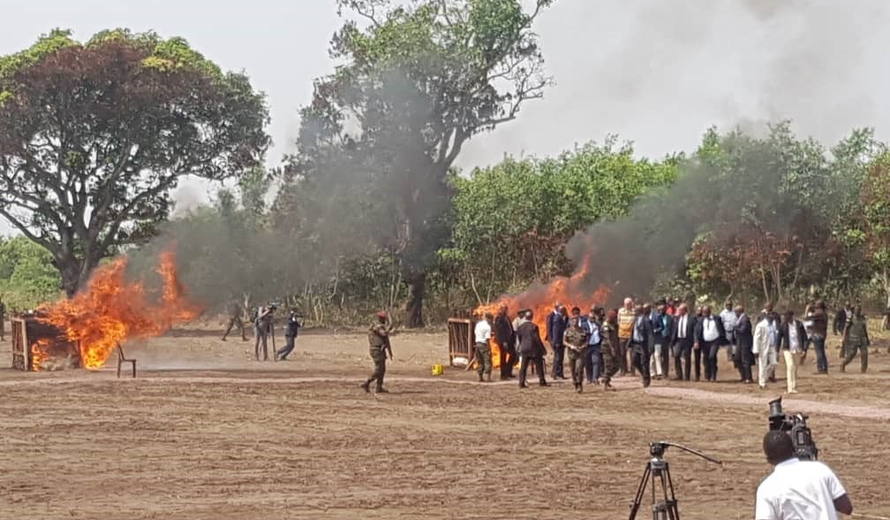 Every year some 300,000 elephants are killed by poachers in Africa for their tusks, and approximately 41 tons of pangolin scales were seized in Africa (in 2017), that is the equivalent of over 34,000 animals.

On Sunday, 30 September 2018, the Democratic Republic of Congo organized a ceremony, in the presidential park of N’sele, 50 km from the centre of Kinshasa, to set free five grey parrots and burn 1,050 kg of raw ivory as well as 1,197 kg of giant pangolin scales. This symbolic event (similar to the one organized by Kenya in April 2016) was attended by the President of the Republic, members of the Government, the parliament, judicial authorities, ambassadors accredited in DRC, conservation NGOs, civil society, the management body CITES, universities and the Institut congolais pour la conservation de la nature (ICCN).

This symbolic action is spectacular, because the situation requires urgent action. This year, the International Fund for Animal Welfare (IFAW) reported that in 2012 alone, only 1% of the seized pangolins came from Africa; this figure has risen to 80 to 90% over the past two years, and the main countries of origin and transit are now Nigeria, Cameroon, DRC and Uganda. At the same time, ivory trafficking in central Africa has become international in scope due to the strengthening of international criminal networks, especially those of Chinese origin (source : WWF, 2017).

Trade involving these species is prohibited by international law, but legal holdouts still remain, and for Africa “this strong act demonstrates the will of the Government of the Democratic Republic of Congo to make a sustainable commitment to the effective protection of emblematic African animal species, many protected in World Heritage Sites” affirmed Dr Mechtild Rössler, Director of UNESCO World Heritage Centre.