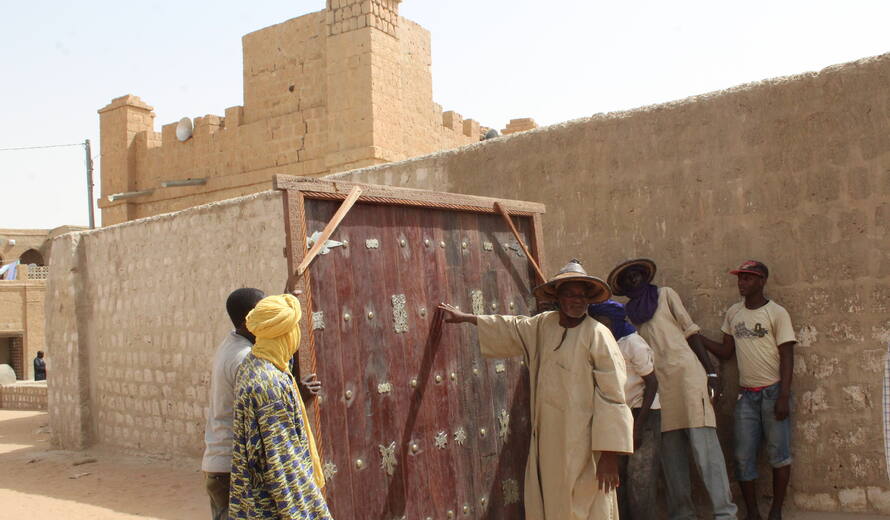 The sacred gate of the mosque of Sidi Yahia in Timbuktu, which bears testimony to cultural traditions dating back to the 15th century CE, was officially reinstalled on 19 September in a ceremony organized by the inhabitants of the World Heritage site.

The gate, regarded as sacred, had been pulled out and damaged on 2 July 2012 by armed extremists who occupied the city. The restoration and reinstallation of this ancient protective symbol of the city was carried out by local wood workers with the support of UNESCO.

The Director-General of UNESCO, Irina Bokova, welcomed the event stressing the importance of heritage protection for the resilience of communities. “The reinstallation of the sacred gate, a religious and cultural landmark of Timbuktu, marks a new and decisive step in Mali’s reconstruction and peace building work. This—along with the reconstruction of the mausoleums of Timbuktu and the trial of those responsible for their destruction at the International Criminal Court—sends strong message to all extremists.”

“Our gratitude goes to UNESCO, the MINUSMA and other partners for making the safeguarding of our heritage a priority,” said Addarawi Assekou Maiga, Deputy Mayor of Timbuktu at the ceremony. European Union Ambassador Holleville for his part paid tribute to the residents of Timbuktu: “We will continue lending our support to the protection of the cultural heritage of Timbuktu as the work accomplished to date is an eloquent testimony to Mali’s recovery.”

“We are all gathered here today to block the road that leads to obscurantism, violent extremism and fundamentalism,” declared Deputy Special Representative Mbaranga Gasarabwe. “In restoring this gate, the city of Timbuktu and the whole of Mali are reaffirming their will to walk along the path of enlightenment, tolerance, peace and respect for diversity, in the spirit of the peace agreement,” added the Deputy Special Representative.

The only gate of the mosque to face the setting sun, the sacred gate, also known as the “secret gate of Sidi Yahia,” is unique both due to its size and significance. Situated in the courtyard that is the last resting place of a number of the town’s historic personalities, the gate offers symbolic protection to the mausoleums of Mohamed Nadhi, the first chief of the town, and of Sidi Yahia. According to traditional belief, whoever would open or break the gate would bring disaster to the city.

UNESCO and the Government of Mali, in January 2013, launched an ambitious heritage rehabilitation programme for the country, which included the reconstruction of mausoleums and other monuments damaged during the time of occupation, and the safeguarding of manuscripts. The programme is benefitting from the MINUSMA’s support for logistics and security, while Switzerland and the European Union are providing funding for the project.