UNESCO calls for mobilization to stop "cultural cleansing" in Iraq 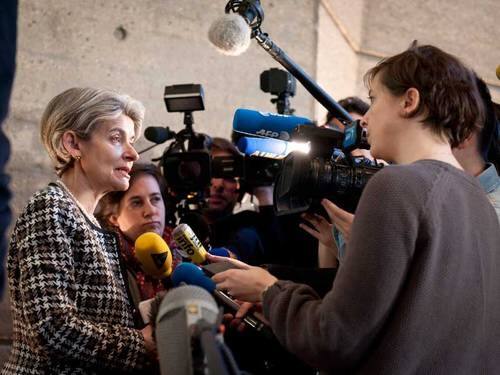 “I was filled with dismay by images of the attack on the Mosul Museum, as well as on other archaeological sites in the Nineveh region in Iraq,” said the Director General of UNESCO, Irina Bokova. She spoke at a press conference following the release of a video showing the devastation of the Mosul Museum in Iraq.

Terrorists based in Iraq defaced many statues and bas-reliefs with an sledgehammer and a jackhammer, and then posted a video of their actions on-line.  "This tragedy is far from just a cultural issue: it’s an issue of major security.  We see clearly how terrorists use the destruction of heritage in their strategy to destabilize and manipulate populations so that they can assure their own domination," stated the Director General.  She welcomed the "international mobilization" that has occurred against cultural cleansing in Iraq.

The Director-General has spoken with the President of the UN Security Council, Wang Yi, and UN Secretary-General Ban Ki-Moon, asking them to convene an emergency session of the Security Council in order to protect the cultural heritage of Iraq as an issue of national security.  She told reporters at the Press Conference that the Secretary-General supported her proposal.

Under the Rome Statute of the International Criminal Court, the deliberate destruction of cultural heritage is a war crime.  The Director-General has alerted the Court through its prosecutor, Fatou Bensouda, and encouraged her to open an investigation.

Trafficking in illicit cultural property directly finances terrorism in Iraq and Syria.  At the Press Conference, the Director-General announced that UNESCO will launch a coalition of partners to stop this illegal trade.  She has contacted the World Customs Organization, Interpol, the International Council of Museums (ICOM), the International Council on Monuments and Sites (ICOMOS) as well as countries bordering Syria and Iraq and will soon convene a meeting to move forward with this initiative.