The Kingdom of Buganda, once the largest of all the traditional kingdoms in East Africa, bears an eloquent witness to the living cultural traditions of present day Uganda. At the heart of this legacy lies the former palace of the Kabakas (Kings) of Buganda, built in 1882 and later converted into the royal burial grounds known as the Muzibu Azaala Mpanga.

After the fire in 2010 the main building of Muzibu Azaala Mpanga was completely destroyed, which led to the monument being inscribed on the World Heritage List in Danger. UNESCO mobilized the international community to help safeguard and renovate both tangible and intangible aspects of this unique cultural monument of Outstanding Universal Value.

The Government of Japan, the Government of Uganda and the Kingdom of Buganda together with the community of practitioners celebrated the launch of the reconstruction of Muzibu Azaala Mpanga on 13 May, 2014. The event was organized by the UNESCO Regional Office for Eastern Africa and the Uganda National Commission for UNESCO.

The highlight of the launch was a welcome and cleansing ritual conducted by a traditional bearer (a woman, custodian of the site) from the Buganda Kingdom. During the ceremony a special request was made to the spirits of the kings to grant permission for the members of the UNESCO Japan Technical Advisory Mission and invited dignitaries to enter the sanctuary. A small basket with coffee beans was then circulated as part of the ceremony. The beans, a symbol of bonding and friendship, were divided and swallowed by two friends, as part of a special ritual that represents togetherness and aims to ensure the well-being of those present and assure success for the reconstruction project. A guided tour of the site was also conducted, so that the visitors could see first-hand the progress in the reconstruction process.

Local UNESCO World Heritage volunteer Ssebuyungo Christopher who has been participating in a series of conservation activities at the site and nearby schools since 2012, expressed his excitement describing the day of the launch as “uplifting for the entire community”.  All throughout the day “people came to help by collecting construction materials and offer their services, such as preparing food offerings. It shows that people are interested in becoming a part of the event,” said Mr Ssebuyungo, who described his volunteer experience as “an avenue to express (his) contribution to the community by helping to preserve heritage sites.” “I use this chance to meet and engage with people, not only to learn more about our own culture, but to discover other cultures and share what I have learned with others.”

Prior to the launch, experts from Uganda were invited to Japan to exchange views and share experiences pertaining to traditional restoration techniques, as well as to ensure availability and quality of traditional building materials. They studied various risk management mechanisms, involving both technology and prevention, whereby site custodians and surrounding communities act as first responders to natural calamities, particularly in the case of fire.

Director of UNESCO Office in Mali, Former Chief at WHC Africa Unit Lazare Eloundou Assomo noted that “the reconstruction project has increased in complexity.” He encouraged all actors working on the ground to ensure greater coordination during the reconstruction process aiming to “retain and perpetuate the integrity and authenticity of its tangible and intangible aspects.”

Ms. Rose Mwanja, Commissioner of Museums and Monuments, representing the Permanent Secretary of the Ministry of Tourism, Wildlife and Antiquities, noted that “the authenticity of the Tombs of Buganda Kings at Kasubi is reflected in the continuity of traditional and cultural practices associated with the site.”

The reconstruction process is being financed thanks to the emergency funds available through the UNESCO World Heritage Fund.  In addition, the site has received a significant contribution from the Government of Japan through the Japanese Funds-in-Trust to UNESCO. The Government of Uganda and the Buganda Kingdom have also mobilized their own resources for the reconstruction.

These grants have not only enabled the development of a master plan and a disaster mitigation plan for the reconstruction process, but have also allowed to design a strategy to strengthen the skills, competencies and abilities of people involved. This strategy involves research and the promotion of sustainable practices and knowledge associated with traditional architecture, along with developing a specific program to enhance public awareness of heritage protection.

Japan’s ambassador to Uganda H.E. Junzo Fujita expressed his country’s continued commitment by supporting the “human resource element that can sustain such traditional architecture” of Muzibu Azaala Mpanga. Japan’s contribution to the project not only consists of financial assistance, it also involves technical cooperation in the areas of knowledge associated with traditional architecture and resource management, as well as disaster mitigation measures needed for the conservation and preservation of cultural heritage.

UNESCO believes that no development can be sustainable without a strong cultural component. Cultural diversity is a driving force for development, not only in terms of economic growth, but also as a means to leading a more fulfilling intellectual, emotional, moral and spiritual life, thereby contributing to social cohesion and peace. UNESCO, together with partners, supports the identification, protection and preservation of cultural heritage around the world considered to be of outstanding value to humanity. 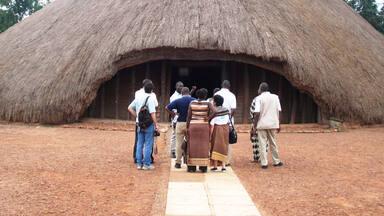