The List Jesuit Block and Estancias of Córdoba
Print

Jesuit Block and Estancias of Córdoba

Jesuit Block and Estancias of Córdoba

The Jesuit Block in Córdoba, heart of the former Jesuit Province of Paraguay, contains the core buildings of the Jesuit system: the university, the church and residence of the Society of Jesus, and the college. Along with the five estancias, or farming estates, they contain religious and secular buildings, which illustrate the unique religious, social, and economic experiment carried out in the world for a period of over 150 years in the 17th and 18th centuries. 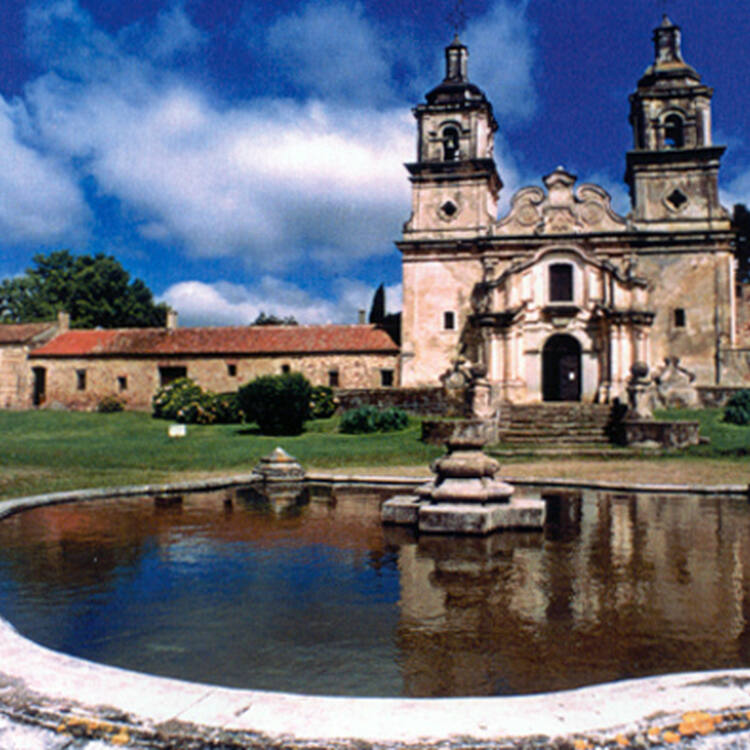 The 38-ha ensemble of the Jesuit Block and five of its estancias (rural farming and manufacturing establishments) in the province of Córdoba, near the geographical centre of Argentina, contains 17th and 18th century religious and secular buildings that illustrate an unprecedented 150-year-long religious, social, and economic experiment. The Jesuit Block in the city of Córdoba contains the core buildings of the capital of the former Jesuit Province of Paraguay: the church, the Jesuit priests’ residence, the university, and the Colegio Convictorio de Montserrat. The Block’s supporting estancias – comprised of Alta Gracia (located 36 km from the Block), Santa Catalina (70 km from the Block), Jesús María (48 km from the Block), La Candelaria (220 km from the Block), and Caroya (44 km from the Block) – each included a church or chapel, priests’ residence, ranches for slaves and indigenous peoples, work areas (camps, mills, beating mills, etc.), hydraulic systems (breakwaters, irrigation ditches, canals, etc.), farmhouses, and large extents of land for cattle breeding.

The Jesuit Block and Estancias of Córdoba is an exceptional example of a vast religious, political, economic, legal, and cultural system. It is likewise an excellent illustration of the fusion of European and Native American cultures, with the added contributions of African slave labourers, during a seminal period in South America. The ensemble is a particular example of territorial organisation, an economic complement between urban and rural settlements that allowed the Society of Jesus to pursue its educational and missionary goals.

The outstanding nature of this ensemble is illustrated by the convergence of two typologies: on the one hand, the European convent layout, with a main church, residence, and college in the city; and on the other, novel rural settlements, where the church, residence, and trading post merged in a productive and interrelated territory. This kind of articulation, where the various productive specializations in each estancia were supported by the construction of complex hydraulic systems, was unique in the American cultural context.

The outstanding achievements of the Jesuit Block and Estancias of Córdoba include the development of technologies based on local resources, both material and human, and the use of the respective knowledge of the participants – the religious Order and the indigenous and African slave labourers – all of which resulted in a mixture of architectural, technological, and artistic expressions reflecting mannerist and baroque influences adapted to the locality.

Criterion (ii) The Jesuit buildings and ensembles of Córdoba and the estancias are exceptional examples of the fusion of European and indigenous values and cultures during a seminal period in South America.

Criterion (iv) The religious, social and economic experiment carried out in South America for over 150 years by the Society of Jesus produced a unique form of material expression, which is illustrated by the Jesuit buildings and ensembles of Córdoba and the estancias.

Within the boundaries of the property are located all the elements necessary to express the Outstanding Universal Value of the Jesuit Block and Estancias of Córdoba. This ensures the complete representation of their significance as architectural and landscape ensembles in their respective settings. The Jesuit Block maintains its original religious, residential, educational, and cultural functions, while the estancias continue operating as cultural, interchange, and regional development centres, even though they have considerably lost their productive nature. Of the five estancias included in the property, two (Santa Catalina and La Candelaria) maintain their original rural settings, another two (Caroya and Jesús María) remain in semi-urban settings, and one (Alta Gracia) became the centre of an urban structure.

The Jesuit Block and Estancias of Córdoba is authentic in terms of the ensemble’s forms and designs, materials and substances, and locations and settings. All the elements of the property have kept their original typologies and constructive, morphological, and spatial characteristics, as well as their referential nature in the local communities.

Various interventions to the components that make up the property have been made since the Society of Jesus was expelled in 1767. Since 1938 and the declaration of these components as national historical monuments, however, actions involving them have been carried out with scientific rigor, according to the standards of each period.

The Jesuit Block in the city of Córdoba and the five estancias of Alta Gracia, Jesús María, Santa Catalina, Caroya, and La Candelaria are variously owned by the federal government, the Province of Córdoba, the Catholic Church, and private owners, and are managed by federal, provincial, ecclesiastical, municipal, and private concerns, and by Presidential Decree (Santa Catalina). All the components of the property have been legally protected at the national level since 1938 (the Colegio Convictorio de Montserrat by Decree 80-860/38) and under Federal Law 12.665 and its Regulating Decree 84-005/41, as amended in 1993, and at the provincial level since 1973 under Provincial Law 5543 for the Protection of the Province’s Cultural Resources, and/or at the municipal level since the 1980s.

The general management plan of the property is under discussion and has not yet been approved. The management plan of each component sets forth measures aimed at preserving the property’s Outstanding Universal Value as well as its integrity and authenticity. There is a general cultural tourism plan that creates a comprehensive framework for the interpretation of the ensemble and promotion of cultural tourism.

Sustaining the Outstanding Universal Value of the property over time will require finalising, approving, and implementing the general management plan; planning territorial and land use; reviewing and updating regulatory frameworks; drafting procedural manuals for conservation and maintenance; planning public use; extending protection of the setting, in consultation with other institutions; developing communication strategies to strengthen local ownership; generating financial resources; and addressing environmental risks.