The caves of the Sierra de Atapuerca contain a rich fossil record of the earliest human beings in Europe, from nearly one million years ago and extending up to the Common Era. They represent an exceptional reserve of data, the scientific study of which provides priceless information about the appearance and the way of life of these remote human ancestors. 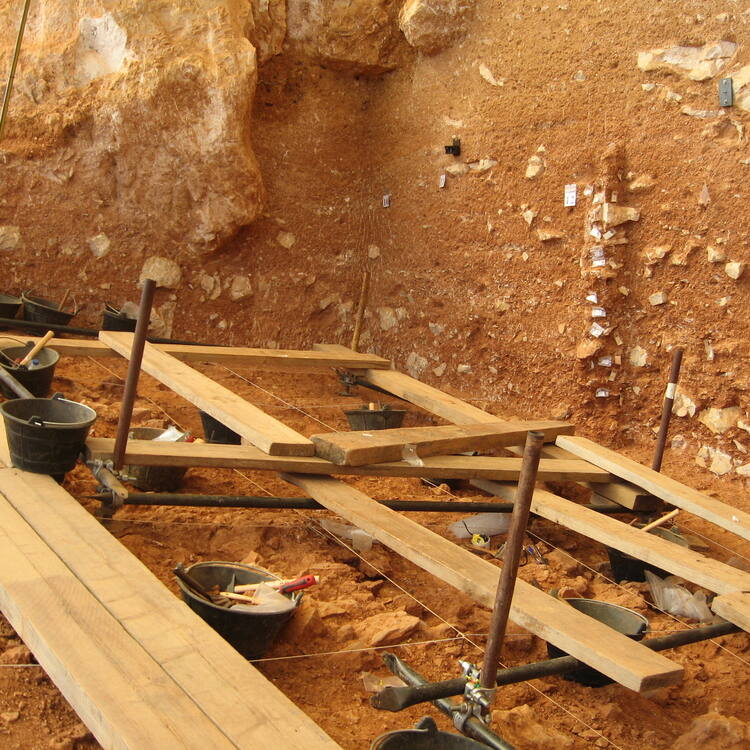 The Archaeological Site of Atapuerca is located near the city of Burgos, in the Autonomous Community of Castilla y León, in the North of the Iberian Peninsula.

The property encompasses 284.119 ha and contains a rich fossil record of the earliest human beings in Europe, from nearly one million years ago and extending into the Common Era. It constitutes an exceptional scientific reserve that provides priceless information about the appearance and way of life of these remote human ancestors.

The Sierra de Atapuerca sites provide unique testimony of the origin and evolution both of the existing human civilization and of other cultures that have disappeared. The evolutionary line or lines from the African ancestors of modern humankind are documented in these sites. The earliest and most abundant evidence of humankind in Europe is found in the Sierra de Atapuerca. The sites constitute an exceptional example of continuous human occupation, due to their special ecosystems and their geographical location. The fossil remains in the Sierra de Atapuerca are an invaluable reserve of information about the physical nature and the way of life of the earliest human communities in Europe. In addition, painted and engraved panels have been recorded, with geometrical motifs, hunting scenes, and anthropomorphic and zoomorphic figures.

The deposits of the property are dated from the Pleistocene with the deposits of the Trinchera del Ferrocarril, (Gran Dolina, Galería-Tres Simas, Sima del Elefante) and the Cueva Mayor (Sima de los Huesos), and from the Holocene period (El Portalón de Cueva Mayor, Galería del Sílex, Cueva del Silo, Cueva del Mirador). There are also archaeological sites of other periods from Prehistoric Times (Paleolithic, Neolithic, Bronze Age, Iron Age) to the Middle Ages and later.

Criterion (iii): The earliest and most abundant evidence of humankind in Europe is to be found in the caves of the Sierra de Atapuerca.

Criterion (v): The fossil remains in the Sierra de Atapuerca constitute an exceptional reserve of information about the physical nature and the way of life of the earliest human communities in Europe.

The Archaeological site of Atapuerca has all the necessary elements, represented by the Pleistocene and Holocene deposits, and the adequate dimension to express its Outstanding Universal Value. The property also includes other archaeological and historic sites that provide information about other periods of occupation. The sequence of archaeo-paleontological deposits in the Sierra de Atapuerca consists of a series of sites with a rich and abundant fossil and archaeological record. All are all cave sites, and it is a railway cutting that initially exposed some of them. Nevertheless, the activities recorded in these deposits accurately reflect past ways of life that occurred over a very long period of time in a relatively undisturbed environment, and were preserved in pristine condition until the time of their discovery.

The property shows no negative effects of development pressure, since it is a natural area sparsely populated and legally protected at the highest level. The regional government has the legal framework to control possible negative impacts on the site, particularly in relation to potential impacts to the visual qualities that are still retained. The Junta de Castilla y León, through specialised staff, ensures that material integrity is retained through adequate conservation and monitoring actions.

The natural caves of the property contain deep strata comprising archaeological and paleontological material of great scientific importance, which have remained untouched since Prehistoric Times until the present day, when they are being excavated scientifically. Their authenticity may therefore be deemed to be total.

The Archaeological Zone of Atapuerca was registered as Bien de Interés Cultural (Property of Cultural Interest) in 1991, the highest legal protection at a national level. This area is set under the responsibility of the Junta de Castilla y León, through the General Directorate of Cultural Heritage. The municipalities of Atapuerca and Ibeas de Juarros have a supervisory function of the private properties located in this area.

The Sierra of Atapuerca has also been registered as “Cultural Area” (Espacio Cultural) in 2010. This protection is based on the Law of Cultural Heritage of Castilla y León and is applied to those properties that have been already declared Bien de Interés Cultural which, due to their special natural and cultural values, request a preferential attention in their management and promotion.

In 2002, the Junta de Castilla y León approved the Guidelines for Using and Managing the property that included specific measures for safeguarding, conservation, research, and promotion of the sites. Although there has been a permanent archaeo-paleontological research program since 1978, any intervention or project at the property, including the archaeological investigation, requires previous administrative authorization from the Commission for Cultural Heritage of Castilla y León, according to the current Cultural Heritage Laws.

For the adequate management of the Espacio Cultural, a Plan has been developed with the participation of local communities, the archaeo-paleontological research team, and the assessment of experts. The Management Plan is a roadmap that sets all the principles and features that the public administrations – at national, regional and local level – must take into account in order to adapt their policies to the conservation of the Outstanding Universal Value of the property, which must prevail over other considerations.

In line with the protection as “Cultural Area”, in 2009 the Junta de Castilla y León also set up the “Atapuerca System, Culture of Evolution” and the Human Evolution Museum, as an integrated system of management and cooperation among the centres related to the archaeological sites. The Museum is the key institution of the system where the materials and results of the archaeological research are kept and studied. It is also meant to be the platform to control the visits to the site. In order to organize these visits, the regional government built two reception centres for the visitors in the municipalities of Ibeas de Juarros and Atapuerca.