This site includes three railways. The Darjeeling Himalayan Railway was the first, and is still the most outstanding, example of a hill passenger railway. Opened in 1881, its design applies bold and ingenious engineering solutions to the problem of establishing an effective rail link across a mountainous terrain of great beauty. The construction of the Nilgiri Mountain Railway, a 46-km long metre-gauge single-track railway in Tamil Nadu State was first proposed in 1854, but due to the difficulty of the mountainous location the work only started in 1891 and was completed in 1908. This railway, scaling an elevation of 326 m to 2,203 m, represented the latest technology of the time. The Kalka Shimla Railway, a 96-km long, single track working rail link built in the mid-19th century to provide a service to the highland town of Shimla is emblematic of the technical and material efforts to disenclave mountain populations through the railway. All three railways are still fully operational. 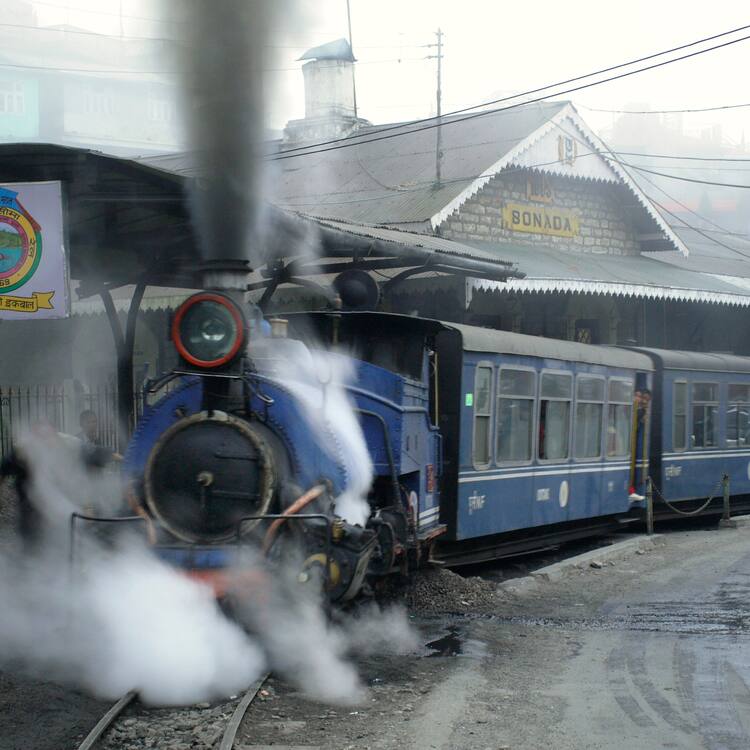 The Mountain Railways of India are outstanding examples of hill railways. Opened between 1881 and 1908 they applied bold and ingenious engineering solutions to the problem of establishing an effective rail link across a mountainous terrain of great beauty. They are still fully operational as living examples of the engineering enterprise of the late 19th and early 20th centuries.

The Darjeeling Himalayan Railway consists of 88.48 kilometers of 2 feet (0.610 meter) gauge track that connects New Jalpaiguri with Darjeeling, passing through Ghoom at an altitude of 2258 meters. The innovative design includes six zigzag reverses and three loops with a ruling gradient of 1:31.
The construction of the Nilgiri Mountain Railway, a 45.88 kilometer long meter-gauge single-track railway was first proposed in 1854, but due to the difficulty of the mountainous location the work only started in 1891 and was completed in 1908. This railway, scaling an elevation of 326 meters to 2,203 meters, representsed the latest technology of the time and uses unique rack and pinion traction arrangement to negotiate steep gradient.

The Kalka Shimla Railway, a 96.6 kilometer long, single track working rail link built in the mid-19th century to provide a service to the highland town of Shimla is emblematic of the technical and material efforts to disenclave mountain populations through the railway. The world's highest multi-arc gallery bridge and the world's longest tunnel (at the time of construction) of the KSR were the a testimony toof the brilliantce engineering skills applied to make thisa dream a reality.

These railways are outstanding examples of innovative transportation systems built through difficult terrain, which had great influence on the social and economic development of their respective regions.

Criterion (ii): The Mountain Railways of India are outstanding examples of the interchange of values on developments in technology, and the impact of an innovative transportation system on the social and economic development of a multicultural region, which was to serve as a model for similar developments in many parts of the world. The Mountain Railways of India exhibit an important cultural and technologicaly transfer in the colonial setting of the period of its construction, particularly with regard to the eminently political function of the terminus station, Shimla.. The railway then enabled significant and enduring human settlement, of which it has remained the main vector up to the present day.

Criterion (iv): The development of railways in the 19th century had a profound influence on social and economic developments in many parts of the world. The Mountain Railways of India are outstanding examples of a technological ensemble, representing different phases of the development in high mountain areas. The Mountain Railways of India are outstanding examples of how access has been provided to the plains and plateaus of the Indian mountains. They are emblematic of the technical and material efforts of human societies of this period to disenclave mountain populations through the railway. They are well-maintained and fully operational living lines. They are used in a spirit and for purposes that are the same as those at its their inception.

The entire length of all three railways including the stations is included within the property boundaries. The boundaries of the property are adequate. The structural integrity has been maintained and the general infrastructure of the lines is today very close to the characteristics of the lines as they originally were. The functional integrity has been preserved though the lines have been systematically repaired and maintained. The integrity of use has been maintained and from the outset the lines have been used for large-scale and permanent transport, with all the characteristics associated with railway disenclavement of mountain areas. Traffic has been regular and continuous up to the present day, and it provides the whole range of initial services, particularly for passengers and tourists. The property is in a generally good condition with regard to infrastructure, technical operation and social use that enables it to adequately express its values. The main threats to the properties are the climatic and geological risks, which however have always formed part of the everyday operation of the three railways. All three areas might be considered areas for potential earthquakes. There is however also the risks of unauthorized encroachment close to the Kalka Shimla Railway, particularly in the buffer zone.

The tracks have been re-laid and retaining walls rebuilt at various points during the highly eventful history of the railways’ operation, regularly disturbed by monsoon rain, landslides and rock-falls. Various station buildings on the three railways have undergone reconstruction during the course of the century, especially those destroyed by earthquake or fire. These buildings are being restored and maintained in their latest form. Further railway related structures have been restored and maintained in their original form. Though new rolling stock and engines have been introduced, the remaining original ones have also been maintained. This includes the famous B-class steam engines of the Darjeeling Himalayan Railway. Original 4-wheeled carriages and bogie-type carriages are still in use. The vulnerabilities are clearly linked to the fact that these properties are functioning railways which require constant repair and the changing of parts. However care has been given to ensure that these parts retain the design and quality of the original.

The owner of the three properties is the Railway Ministry of the Indian Government. All the laws of the Indian Union relating to railways apply to the property, in particular: the Railway Act (1989), for technical protection measures and the Public Premises Act (1971) which in particular provides the right to expel unauthorized occupants. The legal protection in place is appropriate and the Ministry of Railways is making efforts to apply the legal provisions against unauthorized occupation of land within the boundaries properties as well as the buffer zone.

The management is guaranteed by the Ministry of Railways and the relevant branch offices. There is a Property Management Plan, which deals with the management of the land, the buildings, the track, the bridges, and the tunnels for two of the three lines (i.e. Nilgiri and Kalka Shimla) however recommendations have been made to strengthen these in relation to architectural features and encroachments on the property boundaries. The resources are provided by the Indian Ministry of Railways. Train services, station facilities, platforms and passenger amenities are provided for visitors and commuters. In addition, special tourist trains are promoted. The professional personnel of the three railways, and the technical assistance departments of Indian Railways, are fully operational, and are well prepared for climatic and geological risks. Over a century of operation, they have always managed to restore the integrity of the line. They generally intervene within a short lead time, which contributes to the monitoring of the state of conservation of the property. The three railways have the technical documents necessary for the maintenance of track, infrastructure, rolling stock and stations. Indian Railways has a central research department that considers climatic and geological effects with an impact on mountain lines (RDSO). It recommends protective action, particularly to prevent landslides.

The three mountain railways have been in service continuously from theirits inception. They are in a good state of general conservation, and are maintained on a regular and permanent basis.. The traditional arrangements for track maintenance by railway personnel are considered satisfactory to ensure the present and future conservation of the line.. Both the Nilgiri and Kalka Shimla Railway Lines have Management Plans which outline the processes and practices that ensure the ongoing conservation of the lines and their conservation values. However the first of the lines to be listed i.e the Darjeeling Railway still does not have an endorsed Conservation Management Plan. In addition, the architectural management of the Kalka Shimla Railway station buildings and their annexes, to ensure respect for the property's Ooutstanding Uuniversal Vvalue, has not been sufficiently taken into account, and a medium-term project should be drawn up for this purpose. The management authorities should step up control of encroachment on land in the nominated property zone and in the buffer zone.

In regard to the Nilgiri and Kalka Shimla Railways the management plans should be substantially improved in terms of architectural conservation and condition monitoring, and by involving the territorial authorities, particularly in relation to visitor management to ensure that the Outstanding Universal Values are protected. 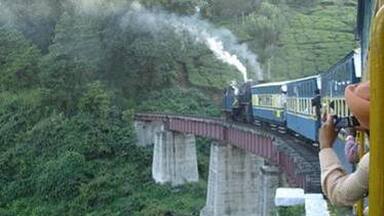 Technical assistance for the management of the Darjeeling Himalayan Railways, the Mountain Railways of India
News