The List Church and Dominican Convent of Santa Maria ...
Print

The refectory of the Convent of Santa Maria delle Grazie forms an integral part of this architectural complex, begun in Milan in 1463 and reworked at the end of the 15th century by Bramante. On the north wall is The Last Supper, the unrivalled masterpiece painted between 1495 and 1497 by Leonardo da Vinci, whose work was to herald a new era in the history of art. 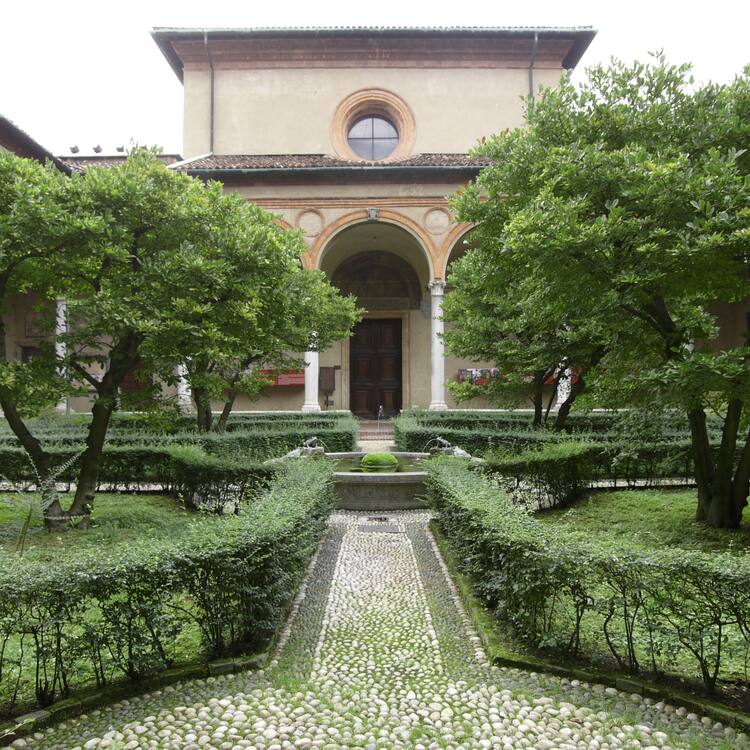 The refectory of the Convent of Santa Maria delle Grazie in Milan forms an integral part of this architectural complex, begun in 1463 and reworked at the end of the 15th century by Bramante. On the north wall is The Last Supper, the unrivalled masterpiece painted between 1495 and 1497 by Leonardo da Vinci, whose work was to herald a new era in the history of art. The complex, including the Church and Convent, was built from 1463 onwards by Guiniforte Solari, and was afterwards considerably modified at the end of 15th century by Bramante, one of the masters of the Renaissance. Bramante structurally enlarged the church and added large semi-circular apses, a wonderful drum-shaped dome surrounded by columns, and a spectacular cloister and refectory.

The painting was commissioned in 1495 and completed in 1497. The representation by Leonardo da Vinci depicted the moment immediately after Christ said, “One of you will betray me”. Leonardo rejected the classical interpretation of the composition and had Jesus in the midst of the Apostles; he also created four groups of three figures on either side of Christ. The 12 Apostles reacted in differing ways; their movements and expressions are magnificently captured in Leonardo's work. The genius of the artist is seen especially in the use of light and strong perspective. Unfortunately, Leonardo did not work in fresco but in tempera on a two-layered surface of plaster that did not absorb paint. It was as early as 1568 when Vasari first pointed out problems with this painting technique.

The Last Supper, which Leonardo da Vinci painted in the refectory of the Dominican convent of Santa Maria delle Grazie, is undisputedly one of the world’s masterpieces of painting. Its unique value, which over the centuries has had immense influence in the field of figurative art, is inseparable from the architectural complex in which it was created.

Criterion (i): The Last Supper is a timeless and unique artistic achievement of Outstanding Universal Value.

Criterion (ii): This work has highly influenced not only the development of one iconographic theme, but also the entire development of painting. Heydenreich wrote about the “superdimension” of its painted bodies in relation to space. It is one of the first classic paintings that focuses on a precise and very short moment of time, instead of a long one. After five centuries, the Last Supper is one of most reproduced and copied paintings, and its creation in 1495-1497 is considered to have heralded a new phase in the history of art.

The property contains all the elements that express its unique value, especially the Santa Maria delle Grazie complex, formed by the church, the convent and the Last Supper painted by Leonardo da Vinci. Despite the damages that occurred during the Second World War, the complex has preserved both its original architectural structure and the internal relation between its components, including the famous fresco. The presence of Dominican Fathers and the continuity of religious use have contributed to safeguard the property’s functional integrity. Da Vinci’s painting has considerable conservation problems due to the techniques used to paint it. The property suffers from environmental pressures and from potentially excessive visitation, although the latter is controlled by limiting access.

The site was badly damaged by bombing in 1943, but subsequently completely restored and renovated. The Last Supper, which miraculously survived the Allied bombing, suffers from other conservation problems which are due, above all, to Leonardo’s experimental technique, and which have long been evident. There are records of restoration works from the eighteenth century up to the present day, which bear witness to the continuing concern regarding the conservation of this artistic heritage. An important restoration of the Last Supper was completed at the end of the 1990. Careful treatment of the extremely delicate and considerably deteriorated paint layer restored the work’s hidden colours. Both the church and convent buildings (e.g. the cloisters) have been the object of continuous restoration works from the 1990s onwards, following a unified conservation strategy. Routine restoration work on the buildings is under way at present and has led to new discoveries that further increase the value of the property.

The complex and its surrounding areas are currently under the protection of Italian law on cultural patrimony (Decreto Legislativo N. 42/2004, Codice dei Beni Culturali e del Paesaggio). Every intervention must obtain a specific authorisation by the local offices of the Ministry for Cultural Heritage and Activities and Tourism. More protection rules have been provided to deal with local traffic and vehicles parking on the nearby public square.

The steering group for the property is formed by the members of the Ministry’s local office. They are directly involved in all aspects of the property. The steering group has the task of defining the guidelines, procedures, programming and periodic monitoring applied to the protection system, which has been established in particular for The Last Supper, and of guaranteeing efficient interaction with the conservation and maintenance programmes for the entire building complex.

One of the most important and difficult aspects of the conservation of the fresco is related to the pollution caused by the great number of visitors. Continual monitoring is performed to guarantee optimum atmospheric conditions inside the refectory and thus avoid the danger posed by air pollution and elevated visitor numbers. A sophisticated monitoring device ensures that the air composition and the light and humidity levels remain within the established limits. A limited number of visitors are admitted at any one time.

The complex is the property of the Italian State, and in 1934, it was given in concession to the Dominican Fathers of Santa Maria delle Grazie, who contribute to the day-to-day administration of the complex with regard to its residential and religious functions. The room of The Last Supper is a museum cared for by the State administration.

The Management of the property is performed by the Ministry for Cultural Heritage and Activities and Tourism through its local Offices, which are directly involved in conservation, monitoring and protection of the property. Although a management plan itself has not yet been drawn up, an effective instrument that regulates the use and external relations is in place.