San Cristóbal de La Laguna, in the Canary Islands, has two nuclei: the original, unplanned Upper Town; and the Lower Town, the first ideal 'city-territory' laid out according to philosophical principles. Its wide streets and open spaces have a number of fine churches and public and private buildings dating from the 16th to the 18th century. 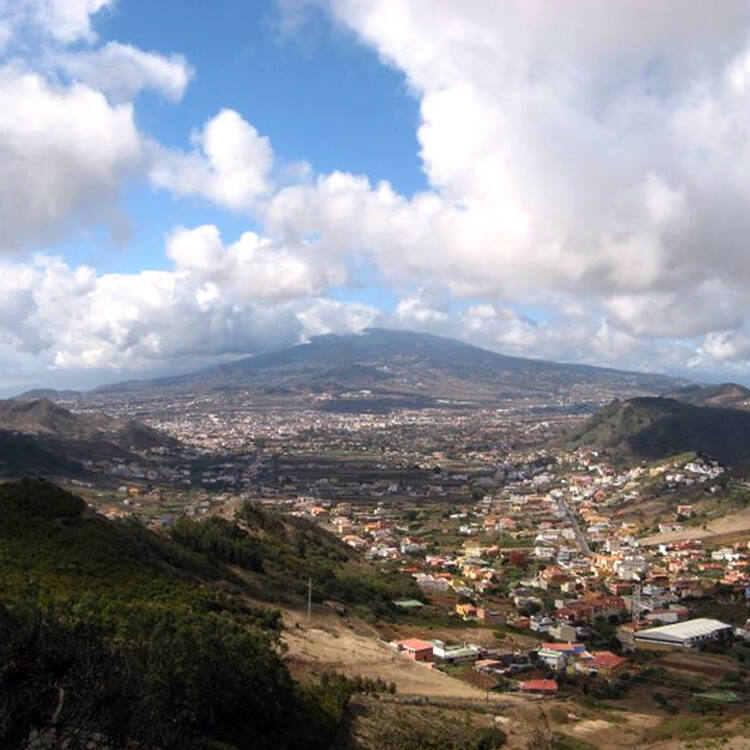 San Cristóbal de La Laguna is located on the Island of Tenerife, part of the Autonomous Community of the Canary Islands in Spain. It was founded in the late 15th century on an inland plateau 550 m above sea level next to an insalubrious lagoon. The property includes two original town centres each belonging to a different time of history: the so-called Upper Town is the initial founding site next to the lagoon, and has an unplanned urban structure; and the Lower Town, one kilometre to the East, which is designed on a grid. It is the first ideal territory-town, being designed according to philosophical principles and Royal regulations, organized around a founding square known as Plaza del Adelantado.

Of the 1470 buildings at San Cristóbal de La Laguna, 627 public and private classified buildings are preserved. Of the set of the classified buildings, 361 were built between the 16th and 18th centuries and belong to the so-called Mudéjar architecture, 96 are from the 19th century, and 170 are from the first half of the 20th century. Currently, its heritage architecture represents significant instances of the Mudéjar, Neoclassical, Modernist, Rationalist, and Contemporary architecture that have remained alive and active until now.

San Cristóbal de La Laguna is the first example of an unfortified town with a grid model that was the direct precursor of the settlements in the Americas under Spanish rule during colonial times. The Castilians founded 8 such grid-plan towns on the Canary Islands. They were founded "ex novo", i.e. on un-built ground, and the town was a political means for the colonization and appropriation of the territory. It is that very philosophy that was transferred to the Americas.

San Cristóbal de La Laguna is a living example of the exchange of influences between the European culture and the American culture, with which it has been maintaining constant links. In the late 15th century and the first years of 16th century, the Canary Islands, and specifically San Cristóbal de La Laguna, became a laboratory of cultural experimentation and the first "Americas". The Canary Islands were a forerunner of America, playing the role of a giver and receiver, and being a melting pot of cultures, which resulted in an indubitable fusion of the contribution of the pre-conquest indigenous people (in ethnographic features and traditional culture) and those from Portuguese, Castilian, and Mudéjar architecture and town-planning. Moreover, inside that religious architecture, a furnishing heritage (sculptures, paintings, gold and silver articles, textiles, sumptuary objects, and furniture) is preserved, which also testifies to a cultural interchange with the Hispanic, Portuguese, North-European (especially Flemish), Italian, and American spheres.

Criterion (ii): San Cristóbal de La Laguna exhibits the signs of an interchange of influences between the European and Hispano-Portuguese and American cultures, with which a constant link on the human, cultural, and socio-economic levels has been maintained. Ibero-America is ever-present at San Cristóbal de La Laguna, not only in its grid plan and Plaza del Adelantado (the founding square), but also in its churches, cloisters, and the civil architecture, which are the siblings of American ones.

Criterion (iv): San Cristóbal de La Laguna was the first non-fortified Spanish colonial town, and its layout provided the model for many colonial towns in the Americas. It is outstanding in its planning as a territory-town, and is the first instance of an unfortified Hispanic town designed and built in a complete project as a space for the organization of a new social order. Since its founding, it has remained a living urban area, in which all the trends, tastes, and styles of each historical period have been expressed, illustrating the first transit point of the Hispanic culture towards the Americas in a two-way cultural interchange that continues until today.

The property’s surface area is 60.38 ha with a buffer zone of 229.77 ha; its original plan and layout, dating back to the 15th century has remained intact since its creation. The property is a living historic town, corresponding to the historical centre of the old town, which is now included inside the modern town. San Cristóbal de La Laguna exhibits a very well preserved, extraordinarily homogeneous town structure, in which the religious, institutional, and residential buildings coexist on the original map design in perfect harmony.A great number of architectural instances representative of its traditional town structure stand out, and its furniture heritage shows the kind of relations it has maintained throughout its history. Furthermore, the original layout still exhibits a relationship between the colonial town layout that is typical of the concept of a territory-town and the architecture of Mudéjar and other types, of which more than 600 instances are classified and preserved: religious buildings (churches, hermitages, cloisters) and civil buildings.

With its history of more than five centuries, San Cristóbal de La Laguna is the result of a type of town dynamics that contain a continuous process of superimposition of historical trends. The town has been evolving since its founding more than 500 years ago and has retained conditions of authenticity in its street pattern, its open spaces, and its monuments, which still preserve a visible time continuity. The authenticity of its urban structure can be demonstrated through a comparative analysis of the current cartography against its historical equivalent. In terms of detail, the authenticity is high. Original facades survive in large numbers, providing an authentic historic streetscape, which demonstrates the diverse origins of the town’s architecture. Its “transmitted architecture,” combining Islamic and European elements, is original and authentic. It also played a very significant role in the development of architecture in the Spanish New World.

Finally, San Cristobal de La Laguna retains much of its traditional trade, which has been adapted to current needs without losing its authenticity. Furthermore, the immaterial heritage in San Cristóbal de La Laguna is intimately linked to the heritage produced through the customs and religious ceremonies.

The inscribed property is part of the larger 83 ha area classified as Property of Cultural Interest (BIC, Bien de Interés Cultural), under the Historical Ensemble category. The Historical Ensemble of San Cristóbal de La Laguna benefits from a Special Protection Plan in accordance with the 1999 Canarian Laws on Historical Heritage and the Spanish legal regulations, and requires consensus of all the political parties of the Town Council. The Special Protection Plan was devised as a Strategic Management Plan that ensures the protection as a result of urban revitalisation processes. Its four strategic lines of action state that the Historical Ensemble must be a high-quality inhabited and, accessible area with economic opportunities. The Management Office, which is a "one-stop shop”, is the main agency through which the inhabitants address procedures within the Historical Ensemble. Moreover, the Historical Ensemble Management Office devotes two days per week to citizens’ consultation. Each of the 627 classified buildings benefits from an individually written Specific Ordinance of Preservation that details all the elements that must be conserved during interventions. A large number of minor and major planning permissions, commercial licenses and implementation orders are treated in order to address the problem of ruins and bad conservation. Furthermore, measures are taken to attract more residents to the Historical Ensemble.

The Town Council will continue with the implementation of the Special Protection Plan through its Management Office. Management and conservation actions will be focused on policies to increase and consolidate the number of permanent residents in the property, on extending town quality to surrounding areas through the regeneration of public spaces and restoration of buildings, and on ordinances for civic co-existence in order to reconcile inhabitants’ needs with commercial and leisure activities.