The List The Four Lifts on the Canal du Centre and ...
Print

The Four Lifts on the Canal du Centre and their Environs, La Louvière and Le Roeulx (Hainaut)

The Four Lifts on the Canal du Centre and their Environs, La Louvière and Le Roeulx (Hainaut)

The four hydraulic boat-lifts on this short stretch of the historic Canal du Centre are industrial monuments of the highest quality. Together with the canal itself and its associated structures, they constitute a remarkably well-preserved and complete example of a late-19th-century industrial landscape. Of the eight hydraulic boat-lifts built at the end of the 19th and beginning of the 20th century, the only ones in the world which still exist in their original working condition are these four lifts on the Canal du Centre. 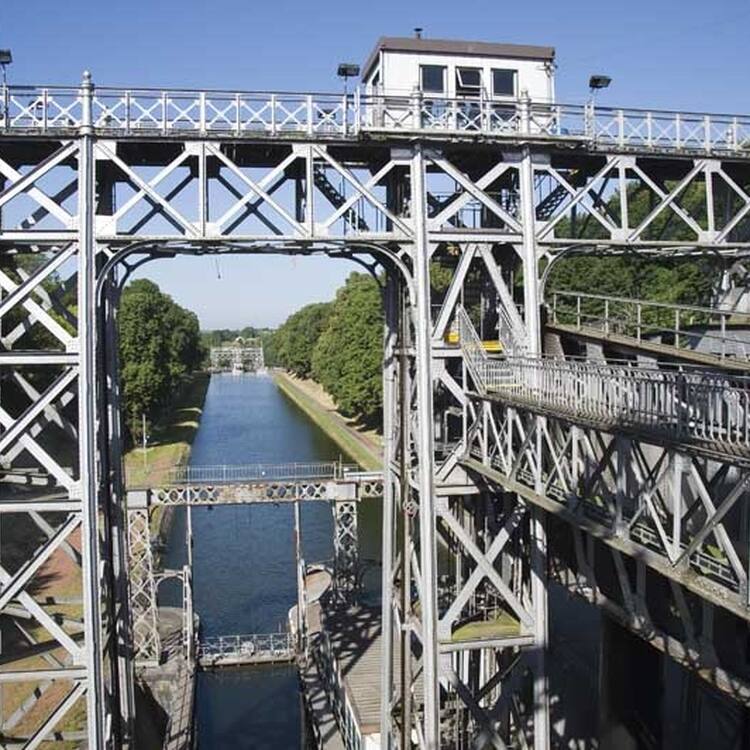 The four hydraulic boat-lifts on the short stretch of the historic Canal du Centre are industrial monuments of the highest quality. Together with the Canal itself and its associated structures, they constitute a remarkably well preserved and complete example of a highly technical industrial landscape at the end of the 19th century.

The construction of the Canal du Centre to ensure the liaison between the Meuse and the Escaut basins was part of the opening-up programme of Hainaut, a rich industrial region, notably coal, but with very few natural navigable waterways for coal export. Digging work began in 1884 and the opening to navigation took place in 1917.

At the very beginning of the project, the architects were confronted with a two-fold problem: the large distance in height over a short distance and the small quantity of water available. The most adapted technique to overcome these constraints was that of boat lifts, developed by English engineers using only hydraulic power.

Over a distance of 7 km, a series of 4 boat lifts, unique worldwide, were built, each one covering a change in level of 15 to 16 meters. The stretch is bordered by a series of art works including two fixed bridges and two lift or swing bridges. The property also comprises the ancient lock No.1 of Thieu, today disaffected, as well as three buildings housing the necessary hydraulic machinery for the good functioning of the lifts. Also, there are several two-storey houses to accommodate the work staff.

In 1911, at the time of the construction of the canal, a tree-planting programme on the banks was initiated. Various types of trees were planted: American elm and white ash, oak, poplar, maple and sycamore, with copses of elder, sometimes mixed with willow, silver birch and false acacia. A variety of  species (black pine, false acacia, maple, hazel, elderberry and popular) were planted around the lifts. Today, the most common species are lime, maple, chestnut and ash.

Of the eight hydraulic boat-lifts constructed at that time and at the beginning of the 20th century, the four lifts of the Canal du Centre are the only ones worldwide remaining in their functioning original state and still in use.

The canal that can accommodate 300 ton boats is currently used for leisure navigation.

Criterion (iv) : These boat-lifts represent the apogee of engineering technology to the construction of canals.

Even although it is now used for leisure navigation, the Canal du Centre has always been in use, ensuring its permanence. The lifts are still hydraulically powered and the art works (swing bridges, lifts etc.) have not been modernized and still function according to the original techniques.

The degree of authenticity is very high in all respects. The lifts have not undergone any modification since they were built, and their operating machinery is in its original form and in perfect working order. Similarly, the other components of this industrial landscape have been preserved and maintained in their original form, with the minimum of modifications resulting from minor technological developments. The brick and stone buildings are well maintained and sympathetically restored where necessary. The same goes for the metal parts: as the riveting technique was not used in Belgium, a foreign society was called upon to ensure identical restoration work following damage caused by a barge.

The Canal du Centre and the lifts were classified by decree of 22 September 1992. A second decree of 1 February 2002 extended the classification to the machinery buildings of Lifts 2 and 3, including equipment, and the adjacent staff housing. The same decree established a protection zone around the Canal. Furthermore, all the classified elements listed on the Exceptional Properties of the Walloon Region, have the highest level of protection foreseen by Walloon legislation. The trees alongside the Canal have been inscribed on the list of remarkable trees and hedges in 1995.

The Canal du Centre and its boat-lifts are public property. They fall under the competence of the Operational Directorate General of the Waterways Department of Walloon with the functioning, maintenance and management being ensured by the staff of this body.

Engineers possess the original plans to guide decisions regarding conservation and management issues. Tourism enhancement is the responsibility of the « Hainaut Waterways » Association depending on the Hainaut Province.

Following the decision of the Walloon Government on 25 August 2011 to provide the Walloon sites inscribed on the World Heritage List with a management plan, a Pilot Committee, Scientific Committee and a Management Committee have been created.

play_arrow The Four Lifts on the Canal du Centre and their ... (UNESCO/NHK)