In the 4th century, a remarkable series of decorated tombs were constructed in the cemetery of the Roman provincial town of Sopianae (modern Pécs). These are important both structurally and architecturally, since they were built as underground burial chambers with memorial chapels above the ground. The tombs are important also in artistic terms, since they are richly decorated with murals of outstanding quality depicting Christian themes. 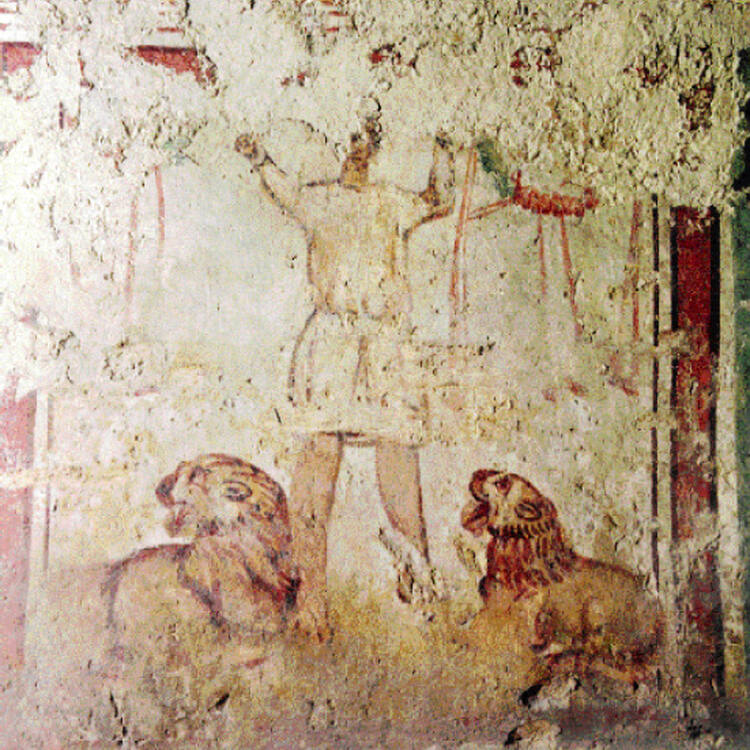 In the 4th century A.D. a remarkable series of decorated tombs were constructed in the cemetery in the town of Sopianae, in the Roman Province of Pannonia, the ruins of which survived under the ground and are situated in the current city of Pécs, in South Hungary. The burial chambers, chapels and mausoleum excavated on the site of the Sopianae cemetery form a complex that bears witness to an ancient culture and civilization that had a lasting impact. It is the richest collection of structural types of sepulchral monuments in the northern and western Roman provinces reflecting a diversity of cultural sources. These monuments are important both structurally and architecturally as they were built above ground and served as both burial chambers and memorial chapels. They are also significant in artistic terms because of their richly decorated murals of outstanding quality depicting Christian themes.

The Roman cemetery was found by archaeological excavations which began two centuries ago. Subsequent excavations revealed that the early Christian complex of monuments provides exceptional evidence of a historical continuity that spanned the turbulent centuries from the decline of the Roman Empire in the 4th century to the conquest of the Frankish Empire in the 8th century. Sixteen structures constitute the World Heritage property, although the cemetery includes over five hundred more modest graves which cluster around the major monuments.

Criterion (iii): The burial chambers and memorial chapels of the Sopianae cemetery bear outstanding testimony to the strength and faith of the Christian communities of the Late Roman Empire.

Criterion (iv): The unique Early Christian sepulchral art and architecture of the northern and western Roman provinces is exceptionally well and fully illustrated by the Sopianae cemetery at Pécs.

The property includes a collection of 16 monuments which are part of the Early Christian Necropolis of Sopianae. They have been revealed through archaeological excavations which are ongoing; further delimitation of the property may change as a result of this ongoing research. With regard to the surviving attributes, all of which are under the ground level today, the intactness of the ruins and of their historic interrelations is sustained to the extent possible considering that subsequent urban layers, including the contemporary living city, are sedimented over the property.

Burial chambers, memorial chapels and other sepulchral remains and fragments excavated since the 18th century have been preserved at their original location following scientific research and restoration, using techniques available at the given time as well as technical solutions available today. Modern interventions necessary to conserve and present the remains are distinguished from original fabric.

The property and its buffer zone are situated within a Historic Monuments Area declared in 1966. The Roman cemetery is also protected as an archaeological site. At local level, City Government Order No. 40 of 1994 declared the historic centre of the city and the area of the Roman cemetery a historic zone. The city has also passed several other ordinances in relation to the protection of historical and architectural values within the context of city development. Ownership of the sixteen monuments is varied: two belong to the Hungarian State, thirteen to the City of Pécs, and one to Baranya County.

Based on National World Heritage Act of 2011 , a new management plan will enter into legal force as a governmental decree and will be reviewed at least every seven years. The management body is the World Heritage Division of Zsolnay Heritage Management Nonprofit Ltd. Once finalized and approved, the Management Plan and the management body will provide clear governance arrangements that involve representatives of different stakeholders. Based on the World Heritage Act , the state of the property, as well as threats and preservation measures will be regularly monitored and reported to the National Assembly; the management plan will be reviewed at least every seven years. Balance has to be kept between the preservation of authenticity and contemporary needs of presentation. In order to ensure increased authenticity of the attributes, modernisation of earlier technical solutions is an on-going management task. Ongoing research within the area of the former Necropolis may provide a base for the extension of the property in the future.