Shortly after its foundation in the 9th century, the Benedictine abbey of Vézelay acquired the relics of St Mary Magdalene and since then it has been an important place of pilgrimage. St Bernard preached the Second Crusade there in 1146 and Richard the Lion-Hearted and Philip II Augustus met there to leave for the Third Crusade in 1190. With its sculpted capitals and portal, the Madeleine of Vézelay – a 12th-century monastic church – is a masterpiece of Burgundian Romanesque art and architecture. 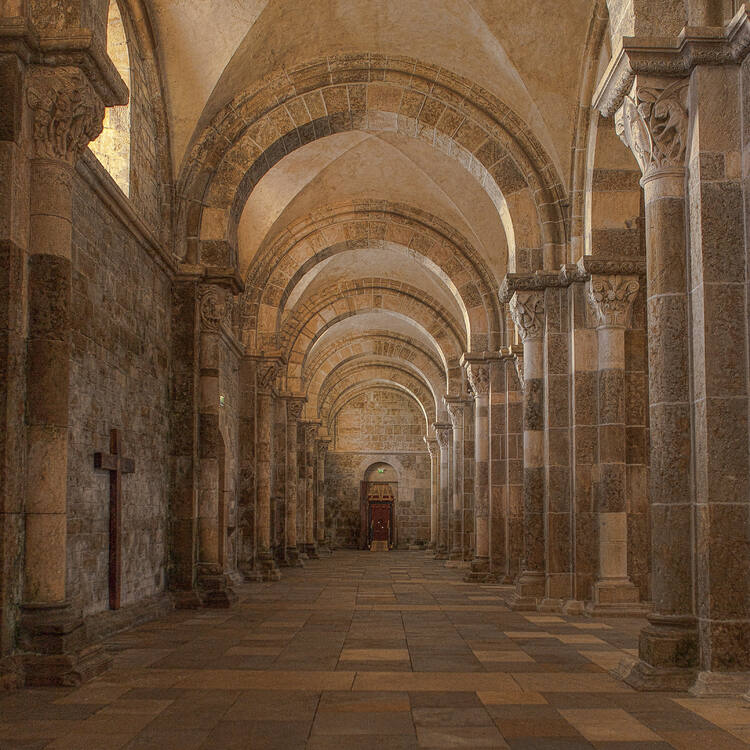 The church of St Mary Magdalene is a former French abbey established in Vézelay in Burgundy-Franche-Comté, in the department of Yonne. Located on a high hill, still called the “eternal hill", this landmark of Christianity of the Middle Ages can be seen from afar.

Established in the 9th century as a Benedictine abbey, the church became famous in the mid-11th century when the belief spread that it held the relics of St Mary Magdalene. It became a place of pilgrimage, all the more popular because it was located on one of the roads leading to Santiago de Compostela. The city benefited from the influx of pilgrims, as in the 12th century its population was between 8,000 and 10,000 inhabitants, a considerable number for the time. Vézelay then became a centre of great importance for the West. In 1146, St Bernard preached the Second Crusade there before King Louis VII, Queen Eleanor and a throng of nobles, prelates and people gathered on the hill. In 1190, Richard the Lion-Hearted and Philip Augustus met there to leave for the Third Crusade. In 1217, Francis of Assisi chose the hill of Vézelay to found the first Franciscan establishment on French soil.

The church of St Mary Magdalene is also a masterpiece of Burgundian Romanesque art as exemplified by its architecture, capitals and carved portal. The central nave (1120-1140), slightly distorted by the downward thrust of the groined vaults, is punctuated by its large horseshoe arches of dual-coloured voussoirs, and capitals which are unique in style and the variety of subjects portrayed (profane allegories, biblical and hagiographic scenes). But it is the sculpted portal between the nave and the narthex which has brought universal fame to Vézelay.  The tympanum bears the "Mission of the Apostles", which, proceeding from an encyclopaedic inspiration, is revealing of the state of science during this period. The entire scene is organized around Christ in Glory blessing the apostles and assigning them the mission of converting the nations. This theme is quite unique in Romanesque art.

Criterion (i): The church of St Mary Magdalene of Vézelay is a masterpiece of Burgundian Romanesque art. The central nave (1120-1140), effectively punctuated by its two-tone arch ribs, is adorned with a series of capitals unique in style and variety of subjects. Its carved portal placed between the nave and narthex, with, notably, the tympanum of the “Mission of the Apostles", makes it one of the major monuments of Western Romanesque art.

Criterion (vi): In the 12th century, the hill of Vézelay was a choice location where medieval Christian spirituality, reaching a sort of paroxysm, gave rise to various and specific expressions, from prayer and chanson de geste to the Crusades.

Vézelay, the "eternal hill", has retained intact the landscape qualities of the site where its abbey was founded in the Early Middle Ages. It is dominated by the abbey church, the existence and activity of which gave rise to the town which ends at the foot of the slope. Beyond spread fields, meadows and forests.

The Revolution and its consequences resulted in the disappearance of the major part of the abbey, with the exception of the abbey church. In a state close to ruin, this was the first restoration site led by Eugène Viollet-le-Duc, one of the fathers of monumental restoration, who managed to save the edifice (1839-1848) by rebuilding part of its vaults.

Inscribed in 1840 on the first List of Historic Monuments of France, the church of Vézelay is one of the first medieval buildings whose conservation was undertaken proactively, due solely to its historic and artistic merits. Since then, an entire set of protection measures, taken in application of the Heritage Code (historic monuments, outstanding heritage site) or the Environmental Code (listed site) has been progressively developed, which apply to the church, the village, the hill and the surrounding landscape. The property is protected by a buffer zone of 18,373 ha, which corresponds to sites listed under the Environmental Code. The property, its buffer zone and the surrounding landscape are therefore protected from potential development pressures.

The church and the public spaces of Vézelay belong to the commune, which is responsible for their conservation and development, under the scientific and technical control of the State.

A major site operation is underway to improve visitor flow management and vehicular traffic around the property.

The landscape integrity of the property receives special attention from the State services in order to reconcile the preservation of Outstanding Universal Value with the objectives of energy transition. The management plan for the property is under preparation.