The world's first botanical garden was created in Padua in 1545. It still preserves its original layout – a circular central plot, symbolizing the world, surrounded by a ring of water. Other elements were added later, some architectural (ornamental entrances and balustrades) and some practical (pumping installations and greenhouses). It continues to serve its original purpose as a centre for scientific research. 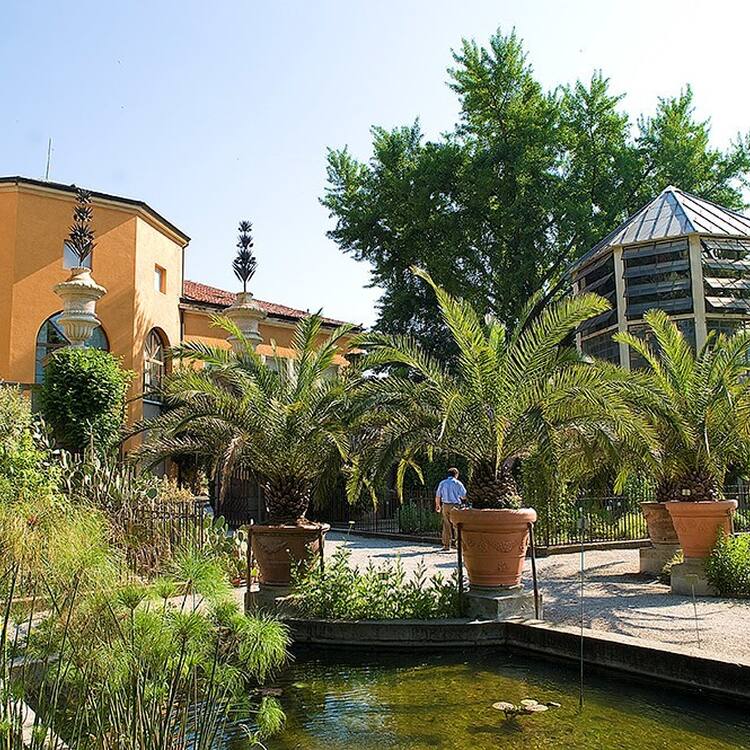 The world's first university botanical garden was created in Padua in 1545, which makes the Botanical Garden of Padua the oldest surviving example of this type of cultural property. Botanical gardens have played a vital role throughout history in the communication and exchange not only of ideas and concepts but also of plants and knowledge. The Botanical Garden of Padua is the original of botanical gardens in Europe, and represents the birth of botanical science, of scientific exchanges, and understanding of the relationship between nature and culture.

It preserves its original layout, a circular central plot symbolizing the world surrounded by a ring of water representing the ocean. The plan is a perfect circle with a large inscribed square, which is subdivided into four units by orthogonal paths, oriented according to the main cardinal directions. When the four entrances were re-designed in 1704, the wrought-iron gates leading to the inner circles and the four acroteria were placed on eight pillars and surmounted by four pairs of wrought-iron plants. During the first half of the 18th century, the balustrade, which runs along the top of the entire 250 m of the circular wall, was completed. The Botanical Garden of Padua houses two important collections: the library that contains more than 50,000 volumes and manuscripts of historical and bibliographic importance and the herbarium, which is the second most extensive in Italy. Particularly rare plants were also traditionally collected and grown in the garden. Currently, there are over 6,000 species, arranged according to systematic, utilitarian and ecological-environmental criteria, as well as thematic collections.

The Botanical Garden of Padua is exceptional by virtue of its high scientific value in terms of experimentation, education and collection, and of its layout and architecture. Its herbarium and library continue to be among the most important in the world. It has made a profound contribution to the development of many modern scientific disciplines, notably botany, medicine, ecology, and pharmacy.

Criterion (ii): The Botanical Garden of Padua has represented a source of inspiration for many other gardens in Italy and around Europe and has influenced both their architectural and functional designs and their didactic and scientific approaches in medicinal plants studies and related disciplines. Since its foundation, it has been at the centre of a wide network of international relationships, contributing to the dissemination of the various aspects of the medicinal plants and botanical sciences and to the preservation of plant species ex-situ. It also made profound contributions to the development of many modern scientific disciplines, notably botany, medicine, ecology and pharmacy.

Criterion (iii): For more than five centuries, the Botanical Garden of Padua has represented an exceptional testimony of scientific and cultural significance. Its position, size and main characteristics, as well as its main research and didactic features, have remained essentially unchanged over centuries with a constant adaptation to the most advanced discoveries in botanical and educational sciences. Many renowned botanists become ‘Praefectus’ of the Botanical Garden of Padua, leaving evidence of their scientific works in the plants named after them (e.g. the Pontederiacae family in honor of Praefectus Giulio Pontedera).

The inscribed property has an area of 2.20 ha with a buffer zone of 11 ha and includes all the necessary elements to convey its Outstanding Universal Value. The Botanical Garden has been continuously maintained over its long history and has retained its integrity in respect to the structural elements, original setting and layout, and in terms of its function, remaining for more than five centuries a location devoted to research, teaching and scientific dissemination.

The Botanical Garden has been in continuous use for its original purposes ever since it was created in the 16th century. It still preserves its original layout a circular central plot, symbolizing the world, surrounded by a ring of water. Although other elements were added later, including some architectural features, such as ornamental entrances and balustrades, and some practical ones, such as pumping installations and greenhouses, it maintains its authenticity. Some restoration works had been carried out during the 19th and 20th centuries in full respect of the original characteristics and materials. The modifications carried out to the original design have kept pace with developments in botanical and horticultural theories and practices, but overall it clearly retains the original design and structure.

The safeguarding and protection of the Botanical Garden of Padua is the shared responsibility of numerous institutional stakeholders, operating at communal, provincial, regional and national levels. The protection and management of the property is ensured by the framework of national legislation on cultural heritage protection (Decreto Legislativo N° 42/2004, “Codice dei Beni Culturali e del Paesaggio”), which prescribes the necessary preliminary approval of any intervention by the Regional Direction for the Cultural and Landscape Issues of the Veneto Region, the local office of the Ministry of Culture.

The Botanical Garden is not legally protected per se, but it is surrounded by several properties protected under the provisions of the basic Italian cultural heritage protection. Most of the eastern boundary is covered by Ministerial constraints under the same law. The City Administration protects a 40 m belt around the entire Garden, under a law approved in 1995 (”Protection area of the Botanical Garden”). This is also a legal framework, which allows only for conservative restoration interventions to be carried out.

At the regional level (Veneto Region) the territorial and urban planning tools aim at promoting the sustainable development of the whole areas included, with particular attention to the cultural-historical identities of the various settlements and the valorisation of the naturalistic areas.

The plans at the provincial level (PTRC of Padua province) identify the possible synergies for the safeguarding of the natural environment and the promotion of the traditional local economic activities, in particular tourism is seen as the key sector to promote the valorisation of the property.

The Botanical Garden is the property of the Italian State, but is on permanent loan to the University of Padua, which is, since its foundation in 1545, the only entity responsible for the management and upkeep of the Garden; the authority in charge is called ‘Praefectus Horti Botanici Patavini’ and is appointed by the Rector of the University. For the past two decades a Technical-Scientific Committee (CTS) composed of distinguished experts in botany and plant pathology has supported the Praefectus. The University is responsible for the maintenance of the Garden and the infrastructure of the greenhouses; it maintains a technical staff of permanent employees (gardeners). Additionally, it receives financial support from the Municipality of Padua, which is primarily used to cover the costs of the guided tours and the extended opening time for the tourists.

To avoid the continuation of the partial destruction of the surrounding areas and urban expansion, the University of Padua bought a large part of the nearby area to build a modern ‘satellite’ botanical garden.

The Management Plan intends to preserve and valorise the Botanical Garden in relation to the other key cultural assets (e.g. the Cappella degli Scrovegni, and the system of the medieval squares) that are present within and nearby the territory of the Padua Municipality and Province, by encouraging joint planning and activities.

The strategic perspective is that of the integrated approach, namely the combination of the science promotion activities (e.g. conferences, seminars and exhibitions dedicated to the various aspects of the botany and the related fields) with sustainable tourism management, offering specific visits to target groups (e.g. schools, universities, experts, scientists, and visitors). This intends to respond to the critical aspects identified by the Management Plan related to the reduction of funds.