These are two of the finest contributions to Barcelona's architecture by the Catalan art nouveau architect Lluís Domènech i Montaner. The Palau de la Música Catalana is an exuberant steel-framed structure full of light and space, and decorated by many of the leading designers of the day. The Hospital de Sant Pau is equally bold in its design and decoration, while at the same time perfectly adapted to the needs of the sick. 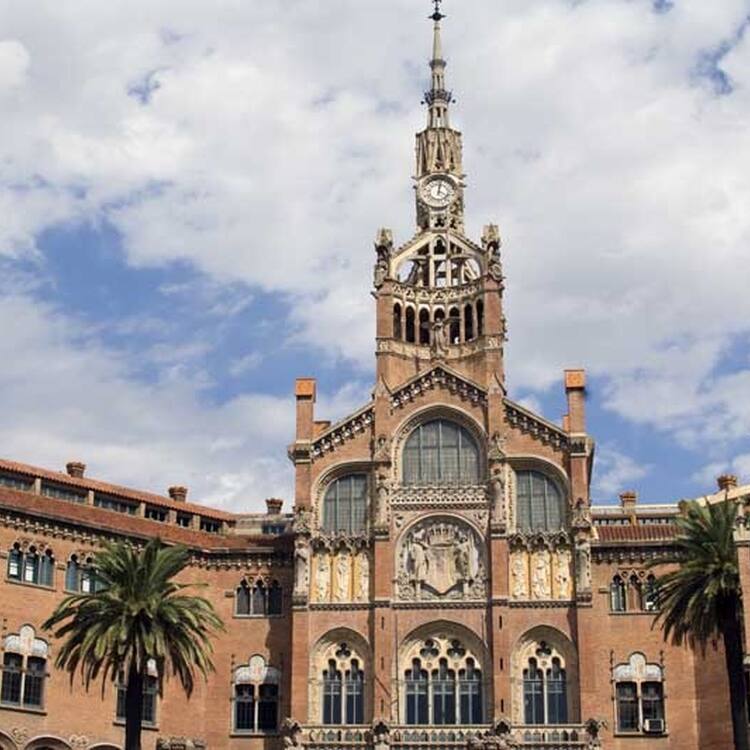 Palau de la Música Catalana and Hospital de Sant Pau are two of the finest contributions to Barcelona’s architecture by the Catalan Modernista architect, Lluís Domènech i Montaner. The Palau de la Música Catalana is an exuberant steel-framed structure full of light and space, decorated by the leading artists of the period. It has uniqueness, authenticity and beauty and is an unparalleled Modernista example of a public concert hall whose symbolic, artistic and historical value is universal. The Hospital de Sant Pau is also daring in terms of design and decoration, although perfectly suited to the needs of patients. Of exceptional interest, it is the most outstanding example of its kind because of its beauty, size and unique design.

The Palau de la Música Catalana was exceptional from the moment of its conception, because of two very important innovative factors: a special concept of space and a very intelligent use of the new technologies developed during the industrial revolution. The reticular steel frame, which made possible extensive open floor spaces with an absence of structural facades, replaced by a glass skin, was an innovative architectural concept of great importance. The whole building was designed as an interactive space, minimising the distinction between exterior and interior by making the best possible use of natural light, a key factor in enjoyment of the interior space. All of this is brought together by the use of traditional arts, with a unique use of decorative motifs, of great authenticity and beauty, in an unprecedented example in the Modernista style (a movement parallel to Art Nouveau) of a concert hall with universal symbolic, artistic and historic values.

These are two of the earliest and finest examples of Modernista architecture, of exceptional importance, both as manifestations of human creative genius and works of art, because they offered new architectural, typological and artistic solutions to facilities for music and medicine.

Criterion (i): The Palau de la Música Catalana and the Hospital de Sant Pau in Barcelona are masterpieces of the imaginative and exuberant Modernista style that flowered in early 20th century Barcelona. They are the work of Lluís Domènech i Montaner, one of the acknowledged leaders of this influential architectural movement.

Criterion (ii): The Palau de la Música Catalana and the Hospital de Sant Pau in Barcelona are outstanding examples of the Catalan Modernista style, movement that played an important role in the evolution of 20th century architecture.

Criterion (iv): The Palau de la Música Catalana and the Hospital de Sant Pau are two of the finest (and earliest) examples of the Modernist style in architecture and of exceptional importance, both as manifestations of human creative genius and works of art.

The property includes the whole of both its components. The boundaries of both monuments include all the attributes that express their Outstanding Universal Value.

A major comprehensive restoration programme (structural, interior and facades), as well as a modernisation of the functional requirements (acoustics, thermal insulation, etc.) was carried out on the Palau de la Música Catalana in 1988. The Hospital de Sant Pau has been undergoing continual maintenance since it was built. Our Lady of Mercy pavilion was restored in 1979–1980 and the Clock Tower in 1985–1989. Because of the difficulty of adapting this historic building to modern medical requirements, hospital services were transferred to new buildings on the north of the site, making possible comprehensive restoration of the original buildings.

Because of these works to maintain the integrity of the structures, adverse factors affecting them are largely insignificant and of external origin (air pollution; dust and water (rain/water table)). Appropriate measures are being taken to suppress them, such as vehicle circulation limitation.

Both monuments possess a high degree of authenticity. Great care has been taken to replace damaged elements such as external tiles with exact copies of the originals. In the Palau de la Música Catalana, ingenious methods have been used to install modern technical equipment such as air conditioning, soundproofing, etc., and to reinforce structural elements, as well as in the careful restoration of the facades. It retains its original use as a concert hall. The Hospital de Sant Pau underwent a comprehensive restoration under a phased plan in 2009–2016. It was intended for the restored pavilions to be used for purposes such as research and health, or as offices for various international organizations.

Business Management and Administration are carried out by the Territorial Commission for the Cultural Heritage of the City of Barcelona. Authorities such as State, Autonomous community and local level are involved in management, in both cases.

The Hospital de Sant Pau was used as a hospital until 2009. Current uses are socio-cultural, international and public visits. The Hospital de la Santa Creu i Sant Pau Foundation is the private body responsible for the management. The Board of Trustees is the overall governing body. Its members are drawn equally from the Barcelona City Council, the Cathedral Chapter and the Government of Catalonia. The management of the site is under contractual agreement between the State Party and a third party and under traditional protective measures or customary law. The special urban plan specifies the uses of the buildings and architectural regulation within the enclosure. There are internal rules of procedure.