The historic city of Verona was founded in the 1st century B.C. It particularly flourished under the rule of the Scaliger family in the 13th and 14th centuries and as part of the Republic of Venice from the 15th to 18th centuries. Verona has preserved a remarkable number of monuments from antiquity, the medieval and Renaissance periods, and represents an outstanding example of a military stronghold. 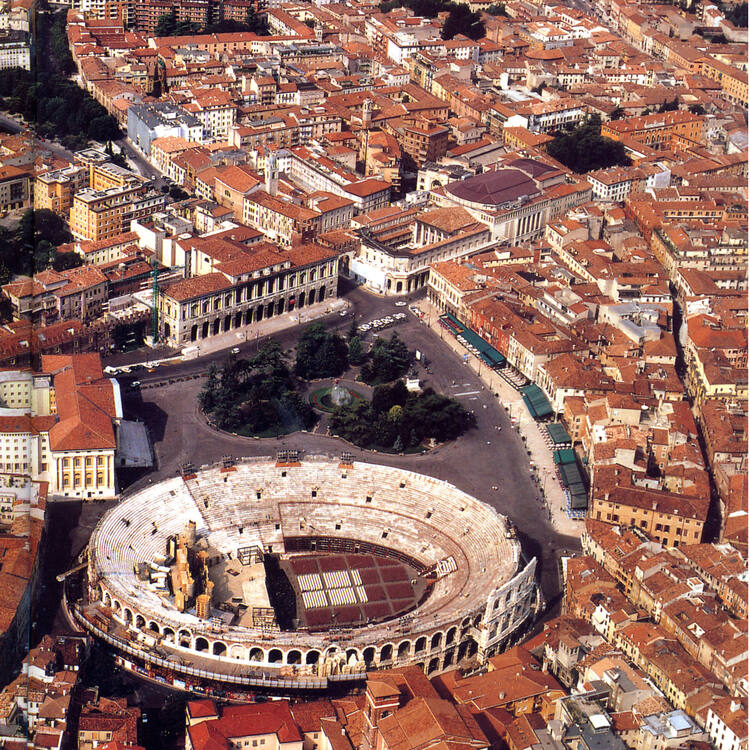 The city is situated in northern Italy at the foot of the Lessini Mountains on the River Adige. It dates from prehistoric times: a small built-up area that developed between the 4th and 3rd century BCE became a Roman municipium in the 1st century BCE after which it rose rapidly in importance. During the 5th century, Verona was occupied by the Ostrogoth Theodoric I, later by the Lombards, and in 774 by Charlemagne. In the early 12th century, it became an independent commune. It prospered under the rule of the Scaliger family and particularly under Cangrande I, falling to Venice in 1405. From 1797, it became part of the Austrian Empire and joined the Kingdom of Italy in 1866.

The core of the city consists of the Roman town nestled in the loop of the river containing one of the richest collections of Roman remains in northern Italy. Surviving remains of this era include the city gate, Porta Borsari, the remains of the Porta Leoni, the Arco dei Gavi, which was dismantled in the Napoleonic period and rebuilt next to Castelvecchio in the 1930s, the Ponte Pietra, the Roman theatre, and the Amphitheatre Arena.

The Scaligers rebuilt the walls during the Middle Ages, embracing a much larger territory in the west and another vast area on the east bank of the river. This remained the size of the city until the 20th century. The heart of Verona is the ensemble consisting of the Piazza delle Erbe (with its picturesque fruit and vegetable market) and the Piazza dei Signori, with historic buildings that include the Palazzo del Comune, Palazzo del Governo, Loggia del Consiglio, Arche Scaligere, and Domus Nova. The Piazza Bra has a number of buildings dating back to different epochs.

Verona’s surviving architecture and urban structure reflects the evolution of this fortified town over its 2,000 year history.

Criterion (ii): In its urban structure and its architecture, Verona is an outstanding example of a town that has developed progressively and uninterruptedly over 2,000 years, incorporating artistic elements of the highest quality from each succeeding period.

Criterion (iv): Verona represents in an exceptional way the concept of the fortified town at several seminal stages of European history.

The historic city of Verona today contains elements representing its 2,000 year history: the Roman period, Romanesque, Middle Ages and Renaissance which have survived intact until the 19th century. The walls surrounding the city prevented 19th century development such as industry and railroads within the historic city. The urban structure, as a result, shows exceptional coherence and a large degree of homogeneity. Although Verona’s buildings suffered significant damage during World War II, the post-war reconstruction plan (1946) maintained its original structure and the reconstruction process was carried out with utmost care. The role of Professor Piero Gazzola, first President of ICOMOS and Supervisor of the heritage of Verona, was crucial in this process. He was also responsible for the reconstruction of the Roman bridge.

Threats to the historic city are low. Until the late 19th century, river flooding was common but measures put in place at that time have controlled this risk. The city is classified as “low risk” for seismic activity. Moreover, tourism is managed to control risk to historic resources.

The authenticity of the City of Verona is high. The present city has been an urban settlement on the River Adige for over 2,000 years. The original Roman urban form continues to be evident in the existing street pattern and the city’s historic fabric remained intact until World War II. As far as the fortified town is concerned, the defence system has been well preserved through the continuity of its military use over time. Surviving evidence of the fortified town, such as Roman gates and Renaissance bastions, reflect this long military history.

Interventions of architectural and urban restoration carried out after World War II were based on the established restoration principle, peculiar to the Italian tradition dating back to the mid 19th century, which has always brought the respect for historical and material testimonies to the foreground. Specifically, the principle is designed to preserve the urban structure and the buildings intact, and to create continuity by carefully incorporating the destroyed areas into the urban pattern while meeting the urban restoration criteria. The reconstruction of the Roman bridge, for example, was based on careful documentation and reuse of original materials.

The property is managed by various public institutions operating at different levels with their own distinct responsibilities. These include the Ministry of Cultural Heritage and Activities that deals with the protection and conservation of cultural heritage through its peripheral offices, and the municipality that defines and carries out the city’s protection and management policies through urban planning programmes and regulations of the activities on the territory.

Listed buildings and monuments in the historic centre are protected under the Cultural Heritage and Landscape Code, the national law for the safeguard of cultural heritage. In compliance with national laws, all physical interventions concerning the cultural heritage are subject to the control of the competent Superintendence (peripheral offices of the Ministry of Cultural Heritage and Activities). Additional forms of protection operate at both the regional and local levels.

Urban and building planning tools operating at the local government level, recognize the boundary of the property and its buffer zone, and formulate a detailed and structured discipline for the historic centre of Verona, aimed at its physical and socio-economic safeguard. In particular, specific building regulations on appropriate interventions are carried out through the classification of all the buildings, whether of value or not, in order to safeguard and enhance the historical, cultural and environmental system as well as to rehabilitate the Historic Town structure.

In addition, the municipal administration has adopted numerous regulations to control conversions within the historic centre, related to different areas such as tourism, commerce, bill posting and traffic.

The municipal administration of Verona includes a UNESCO office that provides coordination and a technical secretariat. The other local institutions (regional and provincial) cooperate in the safeguarding, conservation and management activities by promoting cultural heritage enhancement. An important role is also played by the Diocese of Verona – Cultural Heritage Office, the institution in charge of the Catholic Church Heritage management on behalf of the Ecclesiastical Institution.

The different institutions involved in the management of the site worked together to develop the historic city’s management plan. The Municipality of Verona is responsible for its administration. The plan emerges as a useful tool for creating a sustainable development model able to combine the requests for the safeguarding and conservation of cultural values of the site and its surroundings with tourism development’s contribution to the local economy. The administration of the management plan forms a dynamic process involving several public and private institutions with different interests and competencies. Furthermore, both the tangible and intangible heritage will be enhanced in the medium and long term, by enriching and extending protection and conservation policies.