The first Buddhist temple in China was built here in Sichuan Province in the 1st century A.D. in the beautiful surroundings of the summit Mount Emei. The addition of other temples turned the site into one of Buddhism's holiest sites. Over the centuries, the cultural treasures grew in number. The most remarkable is the Giant Buddha of Leshan, carved out of a hillside in the 8th century and looking down on the confluence of three rivers. At 71 m high, it is the largest Buddha in the world. Mount Emei is also notable for its exceptionally diverse vegetation, ranging from subtropical to subalpine pine forests. Some of the trees there are more than 1,000 years old. 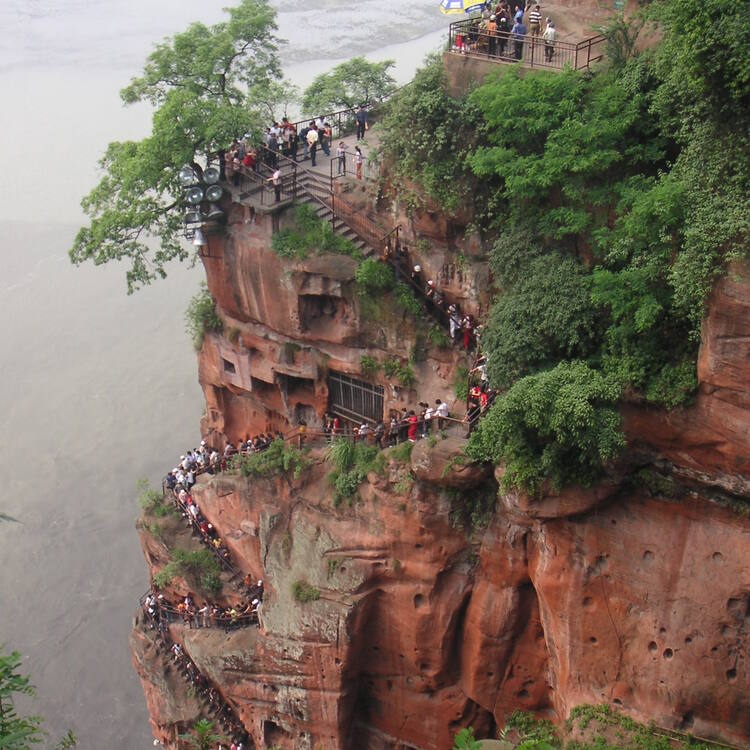 Mount Emei (Emeishan) is an area of exceptional cultural significance as it is the place where Buddhism first became established on Chinese territory and from where it spread widely through the East. The first Buddhist temple in China was built on the summit of Mount Emei in the 1st century CE. It became the Guangxiang Temple, receiving its present royal name of Huazang in 1614. The addition of more than 30 other temples including the Wannian Temple founded in the 4th century containing the 7.85m high Puxian bronze Buddha of the 10th century, and garden temples including the Qingyin Pavilion complex of pavilions, towers and platforms dating from the early 6th century; the early 17th century Baoguo Temple and the Ligou Garden (Fuhu Temple) turned the mountain into one of Buddhism's holiest sites. The most remarkable manifestation of this is the 71 meter tall Giant Buddha of Leshan. Carved in the 8th century CE on the hillside of Xijuo Peak overlooking the confluence of three rivers, it is the largest Buddhist sculpture in the world. A contemporary account of the creation of the Giant Buddha is preserved in the form of an inscribed tablet. Associated monuments include the 9th century Lingbao Pagoda and the Dafo (Giant Buddha) Temple dating from the early Qing Dynasty. The Wuyu Temple contains two important statues: the 9th century Dashi bronze Buddha and the 11th century Amithabha statue group, cast in iron and gilded. Over five hundred Han Dynasty tombs of the 1st to 4th centuries, notable for their fine carvings and calligraphic inscriptions are located on Mahao Crag.

Mount Emei is an area of striking scenic beauty. It is also of great spiritual and cultural importance because of its role in the introduction of Buddhism into China. The conscious siting of so many of the cultural monuments, particularly of traditional architecture, within the natural environment makes it a cultural landscape of very high order.

Mount Emei is also notable for its exceptionally rich vegetation, ranging from subtropical evergreen forests to subalpine pine forests. Covering an area of 15,400 ha in two discrete areas – the Mount Emei and the Leshan Giant Buddha Scenic Areas – the property is an area of natural beauty into which the human element has been integrated with skill and subtlety.

Criterion (iv): On Mount Emei, there are over 30 temples, ten of them large and very old; they are in local traditional style and most are built on hillsides, taking advantage of the terrain. In the selection of the site, design, and construction they are masterpieces of great originality and ingenuity. The advanced architectural and building techniques are the quintessence of Chinese temple architecture.

Associated with these temples are found some of the most important cultural treasures of China, including the remarkable Leshan Giant Buddha carved in the 8th century CE out of the hillside of Xijuo Peak.  Facing the confluence of the Minjiang, Dadu and Qingyi rivers, it is the tallest Buddha sculpture in the world with a height of 71 meters.

Criterion (vi): On Mount Emei, the importance of the link between the tangible and intangible, the natural and the cultural, is uppermost. Mount Emei is a place of historical significance as one of the four holy lands of Chinese Buddhism. Buddhism was introduced into China in the 1st century CE via the Silk Road from India to Mount Emei, and it was on Mount Emei that the first Buddhist temple in China was built.

The rich Buddhist cultural heritage of Mount Emei has a documented history of over 2,000 years, consisting of archaeological sites, important architecture, tombs, ritual spaces, and collections of cultural artefacts, including sculpture, stone inscriptions, calligraphy, painting, and music, among other traditional arts.

Criterion (x): Mount Emei is a site of special significance to conservation and to science for its high floral diversity. The biodiversity of the site is exceptionally rich: some 3,200 plant species in 242 families have been recorded, of which 31 are under national protection and more than 100 species are endemic. This is due to its transitional location at the edge of the Sichuan basin and the eastern Himalayan highlands. Within its elevation range of 2,600 m are found a great variety of vegetation zones including subtropical evergreen broad-leaved forest, mixed evergreen and deciduous broad-leaved forest, mixed broad-leaved and conifer forests, and subalpine conifer forest. This exceptional flora is also rich in animal species with some 2,300 species recorded, including several threatened at a global scale.

The heritage zones of the Mount Emei and Leshan Giant Buddha cover 15,400 ha and 17.88 ha respectively and completely represent the importance of Buddhist culture and ancient architecture. Emei is one of four sacred Buddhist mountains in China and as such, it has been treated as a special protected place for almost 3,000 years. Protection in modern times has taken the form of laws culminating in its establishment as a "Scenic Area" in 1982. The area is subject to various regulations from the national, provincial and municipal governments and has a plan to guide its conservation. Fortunately, because of its size and the relative inaccessibility of its terrain, much of Emei remains untouched and unspoiled. The revival of Buddhism reinforces its protection as the monks can play a quasi-warden role.

The authenticity of the inscribed property, Mount Emei Scenic Area, including Leshan Giant Buddha Scenic Area, lies to a large extent in the relationship between the man-made element and the natural environment. In these terms the authenticity is very high. Conservation and restoration projects have been carried out on individual buildings which in general terms are authentic.  As a sacred place, Mount Emei has benefited from a long-standing and traditional regime of conservation and restoration, which dated back to the mid-10th century. Today, the conservation of the property continues to be carried out in accordance to very strict standards and hence effectively maintains the outstanding values and authenticity of the property.

Mount Emei has been managed since the middle of the 10th century, and the first General Administrative Plan of Mount Emei was produced in the early 1980s. Management follows strictly the central government’s Regulations on Scenery Areas, and the Provincial government’s Regulations on World Heritage Protection of Sichuan Province and the Regulations on Scenery Areas of Sichuan Province. A Management Committee of the Mount Emei-Leshan Giant Buddha Scenic Area with 27 sectors has been established in order to protect and manage the site. The Revised Master Plan for the Mount Emei Scenic Area and the Leshan Giant Plan Buddha Scenic Area has provided the legal basis and policy framework for management and conservation of the property. Any project that has dramatic impacts on the heritage value is strictly controlled and requires government approval. Both the central and local governments provide fiscal support for site protection and management.

At present, the thousand year-old traditional link between the natural and the cultural values of the property is well-preserved. The main threat to Emei is the number of tourists and pilgrims that visit the property and the development that they bring with them. The main intrusion has been a cable car which leads to the Golden Summit of the mountain and brings some 300,000 people a year to the sensitive montane forest zone, as well as the construction of a light monorail in 1998 after inscription of the property. There are numerous drink stands and souvenir stalls which detract from the natural atmosphere of the mountain. The specific long-term management objective for the property is to ensure that, despite increasing visitor pressure, the traditional link of nature and culture is maintained and continues to be well-managed so that both integrity and authenticity of the property are conserved.