The Arctic Circle region of northern Sweden is the home of the Saami people. It is the largest area in the world (and one of the last) with an ancestral way of life based on the seasonal movement of livestock. Every summer, the Saami lead their huge herds of reindeer towards the mountains through a natural landscape hitherto preserved, but now threatened by the advent of motor vehicles. Historical and ongoing geological processes can be seen in the glacial moraines and changing water courses. 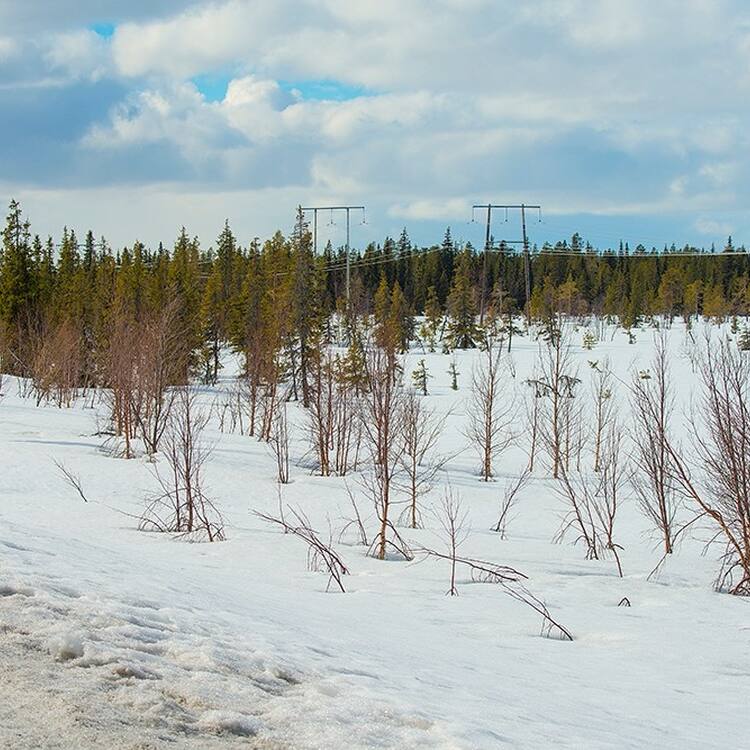 The Laponian Area, located in northernmost Sweden, is a magnificent wilderness of high mountains, primeval forests, vast marshes, beautiful lakes and well-preserved river systems. It contains areas of exceptional beauty such as the snow-covered mountains of Sarek, the large alpine lakes of Padjelanta/Badjelánnda, and the extensive rSiver delta in the Rapa Valley. On-going geological, biological and ecological processes have formed a variety of habitats conserving a rich biodiversity, including many species of fauna and flora typical of the northern Fennoscandian region.

The indigenous Saami people inhabit northern parts of Norway, Sweden, Finland and Russia, close to the Arctic Circle. Within the Laponian Area, every summer, the Saami lead their herds of reindeer towards the mountains through this landscape. Pastoral transhumance landscapes of this kind were at one time common throughout the northern hemisphere. However, these ancestral ways of life, based on the seasonal movement of livestock, have been rendered obsolete or been abandoned in many parts of the world, making the property one of the last and among the largest and best preserved of those few that survive.

Archaeological remains attest to the arrival of early inhabitants to the Laponian area 6,000-7,000 years ago. The area was probably occupied towards the end of the last Ice Age, about 10,000 years BP, but no evidence of this has been found. The settlers were nomadic hunter-gatherers, subsisting principally on wild reindeer, and traces of their occupation are found in the form of hearths and house-foundations. The domestication of reindeer began about two thousand years ago. It evolved gradually, and in the 16th and 17th century the Saami migration with reindeer herds in an annual cycle was fully established.

Today, the Saami live in the mountains during the summer, especially in the western part of the property near the large lakes. Family groups occupy cabins, which have replaced the traditional dwellings. There are no summer camps in the eastern part of the property; the Saami reindeer owners there live in the neighbouring villages and municipalities.

Criterion (iii): The Laponian Area bears exceptional testimony to the tradition of reindeer herding, and is one of the last and unquestionably the largest and best preserved examples of an area of transhumance, a practice once widespread in northern Europe and which dates back to an early stage in human economic and social development.

Criterion (v): The Laponian Area is an outstanding example of traditional land-use, a cultural landscape reflecting the ancestral way of life of the Saami people based around the seasonal herding of reindeer.

Criterion (vii): The property exhibits a great variety of natural phenomena of outstanding beauty. The snow-covered mountains in Sarek and Sulidälbmá are not only magnificent to see but are a textbook of glacial-related geomorphology. The large alpine lakes in Padjelanta, with the mountain backdrop on the Swedish/Norwegian border are of exceptional beauty. The extensive Rapa Valley provides a total contrast with the alpine areas. Particularly noteworthy is its very active delta area, surrounding cliffs and rocky outliers with sheer faces plunging into the delta. The existence of the Saami culture ranging from the traditional birch and turf kata to contemporary cabins adds to the aesthetic value of the property.

Criterion (viii): The nominated area contains all the processes associated with glacial activity such as U-shaped valleys, moraines, talus slopes, drumlins, presence of large erratics and rapidly flowing glacial streams. It has excellent examples of ice and frost action in a tundra setting including formation of polygons and an area of spectacularly collapsing and growing palsa mounds. Glacial rivers originating in the snowfields continue to cut through bedrock. Large unvegetated areas illustrate the phenomenon of weathering. The property also contains a record of humans being part of these ecosystems for seven thousand years.

Criterion (ix): The vast mire complex of Sjávnja/Sjaunja is the largest in Europe outside Russia. This area is virtually impenetrable by human beings except during winter. The Laponian area has primeval coniferous forest with dating indicating ages as old as 700 years. Natural succession continues here unimpaired.

The property, almost entirely state-owned and legally protected, forms a coherent entity apart from a narrow strip which has excised a river and lake system from the Stora Sjöfallet National Park for hydro-electric development and the creation of the Stora Lulevatten artificial lake. This hydro-electric system (outside the property) is not proposed for expansion and is not considered a threat to the integrity of the property. The only hydro-electric development inside the property is a much smaller-scale one with a single control structure and controlled lake near Vietas in the eastern sector of Stora Sjöfallet. This small-scale unit is not proposed for expansion. On the other hand, there is an on-going discussion about windmills just outside the Laponian area which could be a possible threat to the visual integrity of the property.

In some respects, the on-going practice of reindeer herding has adjusted to modern techniques, but it is still the main source of livelihood in this area. The crucial factor in terms of the area’s integrity is the impact of reindeer husbandry, which, by Swedish law, is a right, guaranteed to the Saami people. The Saami retain their traditional rights relating to pasturage, felling, fishing, and hunting and to the introduction of dogs into the protected areas. The possibility of creating a transboundary property with the addition of the adjoining Tysfjord/Hellemo fjord landscape in Norway (thus adding marine connection and significant lower elevation features) has been discussed. Norwegian conservation authorities have been studying the possibility of forming a national park of the region in question.

The authenticity of the property is expressed by and maintained through the continuing Saami practice of reindeer herding and the seasonal movement of the herds to the mountain grazing pastures in summer. The existence and development of reindeer herding is a fundamental condition for the survival of the Saami culture.

The authenticity of the landscape itself and the overall economic process of transhumance and seasonal reindeer grazing is largely maintained. The use of motorized transport by Saami herders is, however, a more recent phenomenon. It can be argued that this is no more than an application of technological developments for a traditional purpose, but it does have a potentially deleterious and irreversible impact on the natural environment and needs to be addressed through management actions.

The buildings of the Saami culture are visible evidence of the continuing presence of reindeer herding activities in the area. They range from the traditional birch and turf dwellings, called goahte, to contemporary cabins.

The archaeological remains in the property attest to human use of the landscape around 6,000-7,000 years ago, and evidence of the move from reindeer hunting to reindeer herding is spread throughout the area. Overall, they are in good condition, however only one third of the property has been the subject of systematic archaeological survey, with only 300 remains having been documented that can be monitored regarding status and damage. It is essential that the remaining areas be surveyed to assess the extent of preservation of other archaeological remains and identify appropriate conservation and management measures.

The property is 99% state-owned and composed of four national parks and two nature reserves. The legal status of the protected areas and management regimes aim toward a strict level of wilderness protection, while at the same time guaranteeing the rights of native people. Other areas are partly protected by the Environmental Code and the Historic Environment Act (1988:950). Archaeological remains and cultural sites connected with the Saami are strictly protected under the provisions of the Historic Environment Act (1988:950). The importance of the mire complex of Sjávnja has been recognized by its Ramsar site designation. Customary law and the Reindeer Husbandry Act protect the right of the Saami people to practise reindeer herding in the property and their traditional rights relating to pasturage, felling, fishing, and hunting.

The Swedish National Heritage Board has overall responsibility for World Heritage implementation, and the Swedish Environmental Protection Agency (SEPA) is responsible for natural heritage. Since 2011 the “Laponiatjuottjudus Association”, including representatives from all concerned parties (which have an agreed common statement of the values of the Laponian Area) is legally responsible for joint management of the property. This non-profit, locally based association with a Saami majority includes two municipalities, nine Saami communities (through Mijà Ednam, which in Saami means “our land”), the Norrbotten County Administrative Board (CAB) and the SEPA. Created to ensure that the Saami are involved in decision making at all stages in management planning and implementation, consensus must be reached in all major decisions. A regulatory framework that takes into consideration local development and a management plan for the entire area has been established. As part of the process, the parties agreed upon new regulations that no longer limit reindeer herding rights. Infrastructure, including a visitor centre at Stora Sjöfallet/Stuor Muorkke to support presentation of the property, is in place.

Biodiversity conservation in the property has included studies on high-profile species such as a population study of the threatened gyrfalcon in the mountain regions of Laponia, and annual surveys of breeding peregrine falcons and white-tailed sea eagles. Inventories of large predators (such as brown bear, wolverine, lynx and golden eagle) are conducted in cooperation with the local Saami villages and the CAB. Population densities of small mammals in parts of Laponia are monitored on a biannual basis, and an environmental monitoring programme for rare alpine plants in the Padjelanta/Badjelánnda part of Laponia has been initiated.

World Heritage and the Arctic
Events 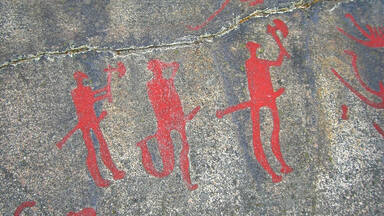