The first Benedictine monks settled here in 996. They went on to convert the Hungarians, to found the country's first school and, in 1055, to write the first document in Hungarian. From the time of its founding, this monastic community has promoted culture throughout central Europe. Its 1,000-year history can be seen in the succession of architectural styles of the monastic buildings (the oldest dating from 1224), which still today house a school and the monastic community. 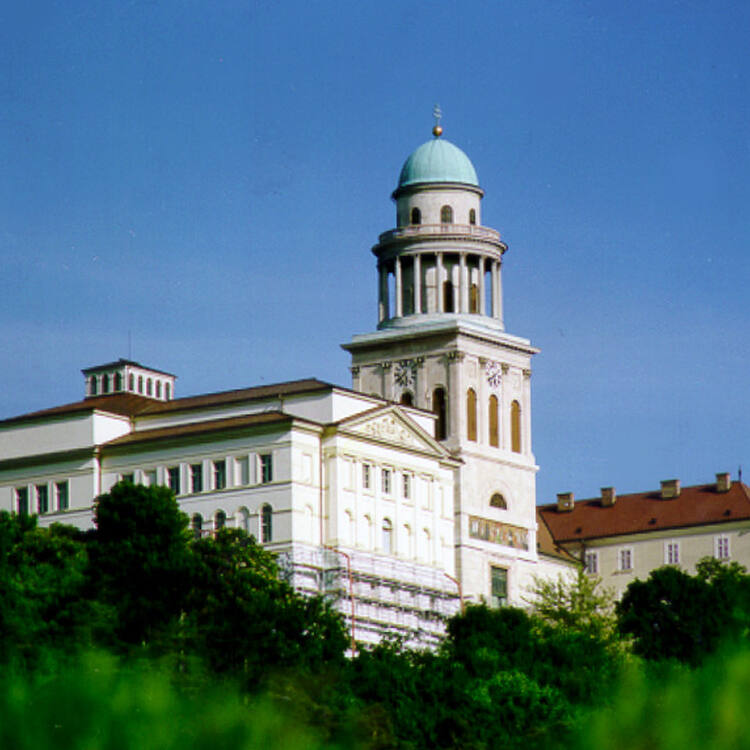 The monastery of the Benedictine Order at Pannonhalma, founded in 996 and gently dominating the Pannonian landscape in western Hungary, had a major role in the diffusion of Christianity in medieval Central Europe. The Archabbey of Pannonhalma and its environment (the monastic complex, the Basilica, educational buildings, the Chapel of Our Lady, the Millennium Chapel, the botanical and herbal gardens) outstandingly exemplifies the characteristic location, landscape connections, original structure, design and a thousand year history of a Benedictine monastery. The community of monks still functions today on the basis of the Rule of St. Benedict, and sustains with a unique continuity one of the living centres of European culture.

The present church, the building of which began in 1224, is the third on the site; it contains remains of its predecessors. The elevated three-aisled choir, the oldest part of the building, overlies a similarly three-aisled crypt, probably an element of the earlier church on the site.

The main south door, known as the Porta Speciosa, is faced with red marble and flanked by five pairs of columns. It has undergone several transformations and reconstructions since it was originally built in the 13th century. This door gives access to the Cloister, a typical square Late Gothic ensemble built in 1486. The vaulting springs form consoles that are elaborately decorated with symbolic motifs. The doors and windows were given their present form in the 1880s. Sculptured stones from the Romanesque cloister were found during studies carried out in the 1960s, when the door leading into the medieval refectory, with small red marble columns, also came to light.

The large Refectory, the work of the Carmelite Martin Witwer in 1724-27, is an oblong two-storeyed hall. The facade is surmounted by a triangular pediment. The building contains a series of mural paintings by Antonio Fossati. The main Monastery consists of a group of buildings dating from the 13th-15th centuries that were originally single-storey but raised to two storeys in 1912, erected in part over the medieval cloister. They were considerably modified in the earlier 18th century: the vaulted corridor and the row of monastic cells on the east-west wing are exceptional examples of 18th century Hungarian monastic architecture. The Library, on four levels, was built in two stages between 1824 and 1835.

The Chapel of our Lady, the building of which began in 1714, is situated at the top of the southern hill. It is single-aisled, 26 m by 10.9 m, rising to 5.58 m in the sanctuary. The nave is barrel-vaulted, and is joined to the sanctuary by a large triumphal arch. Its original Baroque interior was restored in Romantic style in 1865.

The Millenary Monument is one of seven erected to commemorate the thousandth anniversary of the conquest of Hungary in 896. It is located at the crest of the central hill, where it replaced the Calvary that is now located in front of the Chapel of our Lady. It consists of a single block, constructed in brick and limestone. The stone portico is formed of a tympanum bearing a symbolic relief, supported on two pairs of Ionic columns. It was originally surmounted by a dome 26 m high on a high drum, but this had to be removed in 1937-38 because of its severe deterioration.

The principal elements of the area around the monastic complex are the forest and the botanical garden. The forest, on the eastern slopes of the Pannonhalma landscape, is largely the traditional oak forest of this region. It contains a number of rare and protected floral species and is home to many songbirds. The flora of the botanical garden is composed of two groups: one half forest trees and plants of mixed age, and one half hedgerow and park species, both native and exotic. Both the forest and the botanic garden are seen as illustrating the landscape value of the region as a whole and also to set off the aesthetic values of the man-made element represented by the buildings of the monastery.

Criterion (iv): The Monastery of Pannonhalma and its surroundings illustrate in an exceptional manner the characteristic setting, the connections with its environment, the specific structure and the organization of a Christian (Benedictine) monastery that has evolved over a thousand years of continuous use.

Criterion (vi): The Benedictine Monastery with its location and the early date of its foundation in 996 bear special witness to the diffusion of Christianity in Central Europe, which is enriched by the continuing presence of the Benedictine monks who have worked towards peace among countries and people for one thousand years.

The attributes that express the Outstanding Universal Value including the whole historic monastic complex (the buildings of the Archabbey, the Basilica, the educational buildings, the Chapel of Our Lady and the Millennium Monument) and its immediate natural surroundings (the Archabbey's botanical garden, the herbal garden, parks and forests) are located within the property. Thus, the monastic complex incorporates all the venues of Benedictine monastic life. Due to its special location, undisturbed views from and to the property in its wider context can only be partially ensured by delimitation.

The building complex together with its expanding functions has preserved its continuity; over the centuries, particular buildings have undergone many alterations resulting from damage, destruction, or changes in times and style. However, these historic layers, built together in a linear way, ensure authenticity. Restoration and rehabilitation works carried out in several phases in the second half of the 20th century meet international standards of modern and contemporary restoration. The same applies to recent architectural interventions (vineyard, reception building, restaurant, pilgrims’ house and herbal garden). Monastic life is defined by the Rules written by Saint Benedict almost 1500 years ago. The adapted application of these rules is still a current practice in the monastery. The Benedictine motto of ‘Ora et labora!’ (‘Pray and work!’) is still present in the several-hundred-year old traditions of monastic life as well as in one of the most significant activities of Benedictine monks at present, i.e. teaching and educating the youth.

The property has been legally protected as an area of historic monuments since 1964. The protected area was enlarged in 2005 under the Act on the Protection of Cultural Heritage. The historic buildings also have individual monument protection. The forests surrounding the buildings under monumental protection as well as the Abbey's Botanical garden have been part of the Pannonhalma Landscape Protection Area that belongs to the operational area of the Directorate of the Fertő-Hanság National Park since 1992. Based on the national World Heritage Act of 2011, a new management plan will enter into force as a governmental decree and will be reviewed at least every seven years. The Archabbey acts as the World Heritage management body. Once finalized and approved, the management plan and the management body will provide clear governance arrangements, thus defining responsibilities, making the manifestation of different interests possible and providing the institutional framework and methods for the cooperation of the different stakeholders. Based on the World Heritage Act, the state of the property, as well as threats and preservation measures will be regularly monitored and reported to the National Assembly; the management plan will be reviewed at least every seven years. One of the management challenges consists in ensuring access to the culture and monastic traditions represented by the Archabbey to as many people as possible as well as in presenting the historical, natural and landscape values of the property without disturbing the everyday life of the monks, and without degrading the physical state of the monastic complex or of the natural areas. In order to achieve this, conditions and financial resources (e.g. forest and land ownership) necessary for the autonomous and sustainable functioning and management of the monastery should also remain available in the long run. Long-term management requirements also include the protection of important views in the wider context of the property by appropriate tools (e.g. territorial planning).

play_arrow Millenary Benedictine Abbey of Pannonhalma and its ... (UNESCO/NHK)