Founded in 1540 on the banks of the River Magdalena, Mompox played a key role in the Spanish colonization of northern South America. From the 16th to the 19th century the city developed parallel to the river, with the main street acting as a dyke. The historic centre has preserved the harmony and unity of the urban landscape. Most of the buildings are still used for their original purposes, providing an exceptional picture of what a Spanish colonial city was like. 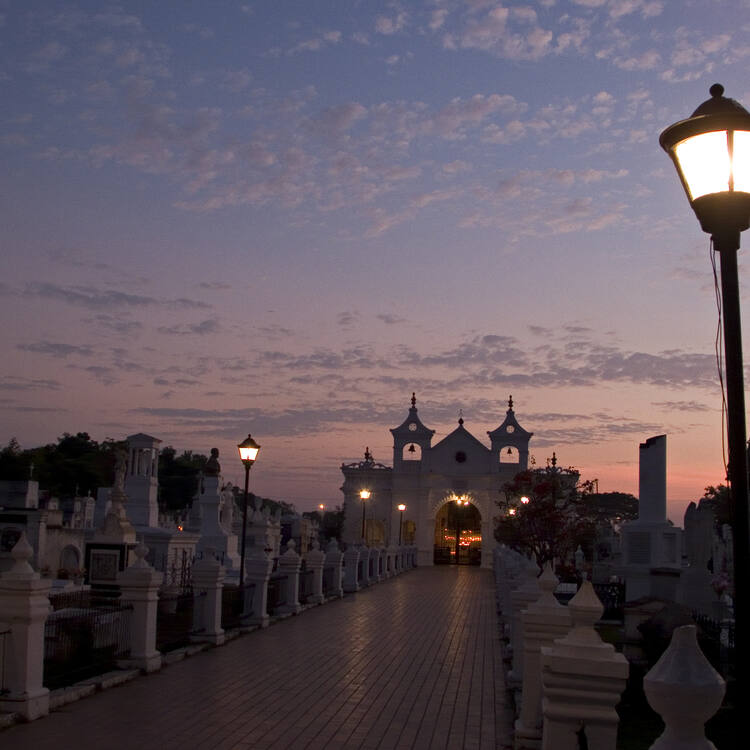 Santa Cruz de Mompox, located in the swampy inland tropics of northern Colombia’s Bolívar Department, was founded about 1539 on the Magdalena River, the country’s principal waterway. Mompox was of great logistical and commercial importance, as substantial traffic between the port of Cartagena and the interior travelled along the river. It consequently played a key role in the Spanish colonization of northern South America, forming an integral part of the processes of colonial penetration and dominion during the Spanish conquest and of the growth of communications and commerce during the 17th to early 19th centuries. The city developed parallel to the river, its sinuous main street growing freely and longitudinally along the river bank, on which barricade walls (albarradas) were built to protect the city during periods of flooding. Instead of the central plaza typical of most Spanish settlements, Mompox has three plazas lined up along the river, each with its own church and each corresponding to a former Indian settlement. Most of the buildings in its 458-ha historic centre are in a remarkable state of conservation and still used for their original purposes, thus preserving an exceptional illustration of a Spanish riverine settlement. Founded in 1540 on the banks of the River Magdalena, Mompox played a key role in the Spanish colonization of northern South America. From the 16th to the 19th century the city developed parallel to the river, with the main street acting as a dyke. The historic centre has preserved the harmony and unity of the urban landscape. Most of the buildings are still used for their original purposes, providing an exceptional picture of what a Spanish colonial city was like.

The historic centre of Santa Cruz de Mompox’s identity as a Spanish colonial river port defines the unique and singular character of its monumental and domestic architecture. From the 17th century onwards, houses were built on the Calle de La Albarrada with the ground floors given over to small shops. These “house-store” buildings are built in rows of between three and ten units. Significant in their contribution to the townscape are the open hallways across the front facades that share a common roof. The private houses of the 17th to early 19th centuries are laid out around a central or lateral open space, creating linked environments adapted to the climate and reflecting local customs. The earliest type of house for merchants or Crown servants has a central courtyard; there is often a secondary courtyard for services attached to the back of the building. Most of the houses retain important features such as decorated portals and interiors, balconies and galleries. The special circumstances of the development of the city along the river have given it a quality with few parallels in this region. Its economic decline in the 19th century conferred a further dimension on this quality, preserving it and making it the region’s most outstanding surviving example of this type of riverine urban settlement.

Criterion (iv): The Historic Centre of Santa Cruz de Mompox forms an integral part of the processes of colonial penetration and dominion during the Spanish conquest and the growth of communications and commerce during the 17th to early 19th centuries.

Criterion (v): The special circumstances of the development of the town, which grew freely and longitudinally following the sinuous path of a road roughly parallel to the river, have given it a special quality with few parallels in the region of northern South America. The subsequent economic decline and the remarkable state of preservation that resulted confers a further dimension on this quality, making it the region’s most outstanding surviving example of this type of riverine urban settlement.

The boundaries of the Historic Centre of Santa Cruz de Mompoxare clearly defined and include all the elements necessary to express its Outstanding Universal Value. The property is of sufficient size to adequately ensure the complete representation of the features and processes that convey the property’s significance, and it does not suffer from adverse effects of development and/or neglect.

By virtue of the fact that Santa Cruz de Mompox lost much of its economic importance in the 19th century, its historic centre has not been subjected to the pressures for redevelopment that have affected other towns of this type in northern South America. The historic centre’s original street pattern has been preserved intact, along with a large proportion of its earlier buildings. Its level of authenticity is therefore high in terms of its setting, forms, materials and construction techniques. Most of the buildings are still being used for their original purposes. The historic centre has therefore retained its original residential function. The historic centre is generally in a good state of preservation; private owners have considerable pride in their properties, which they maintain in good condition without government funding.

The Historic Centre of Santa Cruz de Mompoxis subject to flooding. The barricade wall that protects La Albarrada and the historic centre leaks and is deteriorating; as a result, there is a risk of damage to utility networks, structural problems in masonry and harm to walls as a result of humidity.

Ownership of the Historic Centre of Santa Cruz de Mompox is shared among private individuals, institutions, the Roman Catholic Church (the Diocese of Magangué) and local government authorities. Unusually for Colombia, there is in Mompox a tradition of retaining ownership of private houses within a single family. The historic centre was declared a National Monument under the provisions of Law No. 163 of 1959, which covers the basic principles for the management and protection of the cultural heritage. It has been regulated by a municipal building code since 1970, by means of which all construction work within the historic centre is strictly controlled. There are legal provisions to maintain and protect the urban and architectural heritage while adapting to new conditions and the needs of development. The current urban regulations for the historic centre, which devolve the responsibility for certain aspects of the protection of this historic property to local and regional authorities, were approved by the National Monuments Council in March 1994.

The Colombian Cultural Institute (COLCULTURA), part of the Ministry of Education, is the national agency responsible for the preservation of the historic centre of Santa Cruz de Mompox; it is advised by the National Monuments Council. COLCULTURA's Cultural Heritage Office carries out preservation projects through the Division of Historic Centres and Architectural Heritage and the Technical Secretariat of the National Monuments Council. There is no management plan for the property per se. However, the strict building code of 1994, the urban regulations, the national law for all sites that have cultural interest, plus the supervisory role and technical support by the National Government, exercise effective management of the area. There is control over interventions by private owners within the historic area, and specific functions are assigned to the different entities participating in its protection. This code is the model for all historic towns and town centres in Colombia. There is an effective 183-ha buffer zone prescribed in the planning regulations.

Sustaining the Outstanding Universal Value of the property over time will require preparing for and mitigating the high risk of flooding; and taking actions to improve the social and economical conditions of the community in order to overcome problems related to economic stagnation. Additional key management issues that were raised at the time of inscription include restoring the historic character of the important part of the city between Concepción and San Francisco plazas and along the river bank; continuing efforts to ensure the cleanliness of the river bank; and developing a detailed tourism plan that respects the quality of the visitor experience and promotes benefit-sharing mechanisms for local communities as an incentive to enhance their support for the conservation of the property. Priorities for achieving this include concerted planning and action among all relevant national, regional and local governments and local communities. The long-term sustainability of the property would benefit from the further development of an integrated plan that includes all of these actions, and the provision of adequate and sustained institutional and financial support.