The List Historic Ensemble of the Potala Palace, Lhasa
Print

The Potala Palace, winter palace of the Dalai Lama since the 7th century, symbolizes Tibetan Buddhism and its central role in the traditional administration of Tibet. The complex, comprising the White and Red Palaces with their ancillary buildings, is built on Red Mountain in the centre of Lhasa Valley, at an altitude of 3,700m. Also founded in the 7th century, the Jokhang Temple Monastery is an exceptional Buddhist religious complex. Norbulingka, the Dalai Lama's former summer palace, constructed in the 18th century, is a masterpiece of Tibetan art. The beauty and originality of the architecture of these three sites, their rich ornamentation and harmonious integration in a striking landscape, add to their historic and religious interest. 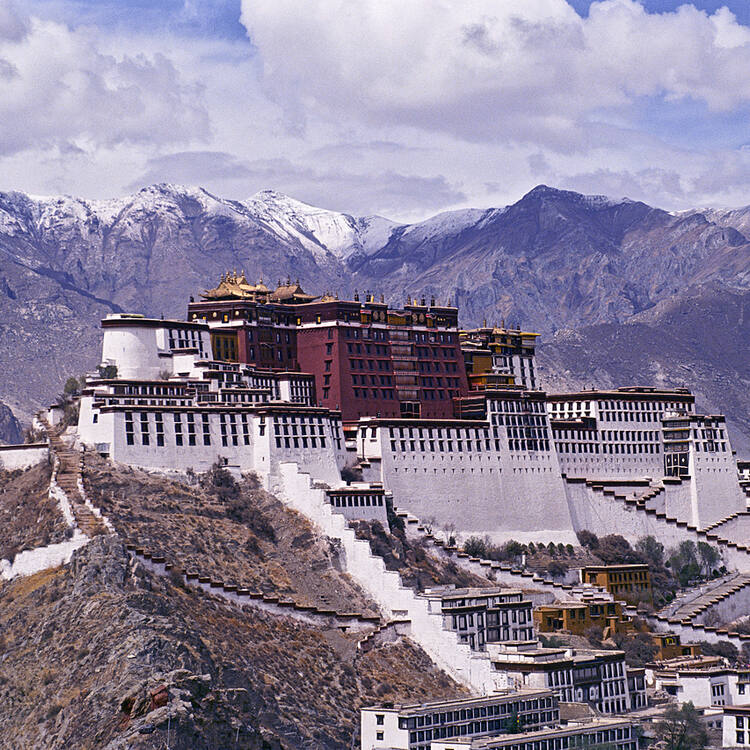 Enclosed within massive walls, gates and turrets built of rammed earth and stone the White and Red Palaces and ancillary buildings of the Potala Palace rise from Red Mountain in the centre of Lhasa Valley at an altitude of 3,700 metres. As the winter palace of the Dalai Lama from the 7th century CE the complex symbolizes Tibetan Buddhism and its central role in the traditional administration of Tibet. The White Palace contains the main ceremonial hall with the throne of the Dalai Lama, and his private rooms and audience hall are on the uppermost level. The palace contains 698 murals, almost 10,000 painted scrolls, numerous sculptures, carpets, canopies, curtains, porcelain, jade, and fine objects of gold and silver, as well as a large collection of sutras and important historical documents. To the west and higher up the mountain the Red Palace contains the gilded burial stupas of past Dalai Lamas. Further west is the private monastery of the Dalai Lama, the Namgyel Dratshang.

The Jokhang Temple Monastery was founded by the regime also in the 7th century, in order to promote the Buddhist religion. Covering 2.5ha in the centre of the old town of Lhasa, it comprises an entrance porch, courtyard and Buddhist hall surrounded by accommodation for monks and storehouses on all four sides. The buildings are constructed of wood and stone and are outstanding examples of the Tibetan Buddhist style, with influences from China, India, and Nepal. They house over 3,000 images of Buddha and other deities and historical figures along with many other treasures and manuscripts. Mural paintings depicting religious and historical scenes cover the walls.

Norbulingka, the Dalai Lama's former summer palace constructed in the 18th century, is located on the bank of the Lhasa River about 2km west of the Potala Palace in a lush green environment.  It comprises a large garden with four palace complexes and a monastery as well as other halls, and pavilions all integrated into the garden layout to create an exceptional work of art covering 36ha. The property is closely linked with religious and political issues, having been a place for contemplation and for signing political agreements.

The Historic Ensemble of the Potala Palace, Jokhang Temple and Norbulingka embody the administrative, religious and symbolic functions of the Tibetan theocratic government through their location, layout and architecture. The beauty and originality of the architecture of these three sites, their rich ornamentation and harmonious integration in a striking landscape, contribute to their Outstanding Universal Value.

Criterion (i): The Historic Ensemble of the Potala Palace is an outstanding work of human imagination and creativity, for its design, its decoration and its harmonious setting within a dramatic landscape. The three-in-one historic ensemble of the Potala Palace, with Potala the palace-fort complex, Norbulingka the garden residence and the Jokhang Temple Monastery the temple architecture, each with its distinctive characteristics, forms an outstanding example of traditional Tibetan architecture.

Criterion (iv): The scale and artistic wealth of the Historic Ensemble of the Potala Palace, which represents the apogee of Tibetan architecture, make it an outstanding example of theocratic architecture, of which it was the last surviving example in the modern world.

Criterion (vi): The Historic Ensemble of the Potala Palace forms a potent and exceptional symbol of the integration of secular and religious authority.

The Historic Ensemble of the Potala Palace owns tens of thousands of collections of diverse cultural relics. The wall paintings are rich in themes, form the best of Tibetan painting art and precious material evidence for learning Tibetan history and the multi-ethnic cultural fusion. The historic scale, architectural typology and the historic environment remain intact within the property area and within the buffer zone, carrying the complete historic information of the property.

In terms of design, material, technology and layout, the historic ensemble of the Potala Palace has well retained its original form and characteristics since it was first built and from successive significant additions and expansions, convincingly testifying to its Outstanding Universal Value.

The three components of the Historic Ensemble of the Potala Palace, the Potala Palace, Norbulingka and the Jokhang Temple are all State Priority Protected Sites, and protected by the Law on the Protection of Cultural Relies of the People's Republic of China.The Potala Palace was inscribed on the World Heritage List in 1994, the Jokhang Temple in 2000 as an extension to the property, and Norbulingka in 2001 as a further extension to the property. The buffer zone of the property has been confirmed as originally demarcated. Any intervention must be approved by the responsible cultural heritage administration, with restoration strictly in accordance with the principle of retaining the historic condition. The Potala Palace Management Regulations have been put into force; measures are formulated and taken for better visitor management. A World Heritage Steering Committee has been established in Lhasa. The conservation and management plans for the three component parts of the World Heritage property have been formulated and will be submitted and put into force as soon as possible.