Located in the interior of Yaku Island, at the meeting-point of the palaearctic and oriental biotic regions, Yakushima exhibits a rich flora, with some 1,900 species and subspecies, including ancient specimens of the sugi (Japanese cedar). It also contains a remnant of a warm-temperate ancient forest that is unique in this region. 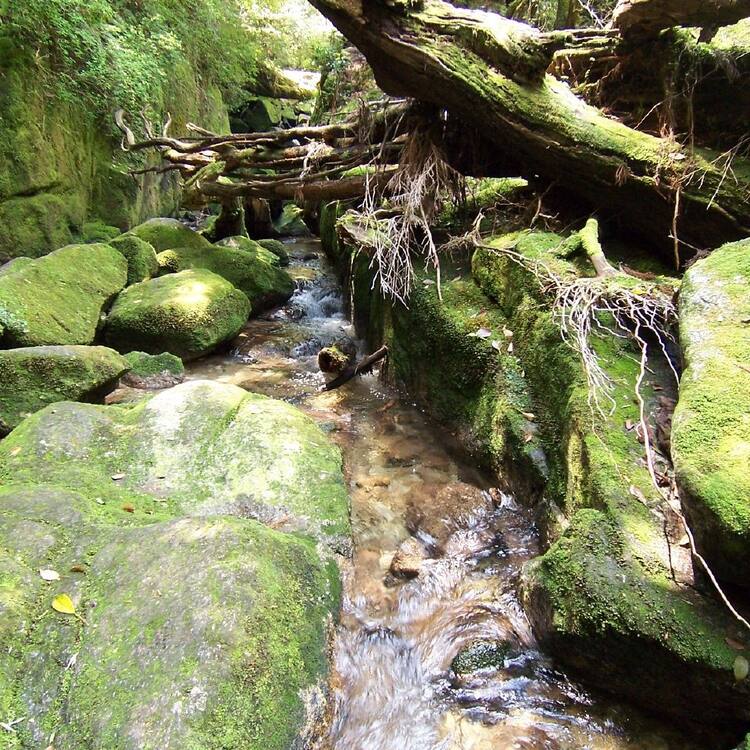 Yakushima is a primeval temperate rainforest extending from the centre of the almost round-shaped, mountainous Yakushima Island. Situated 60 km off the southernmost tip of Kyushu Island in the southwestern end of Japanese archipelago, the island is located at the interface of the palearctic and oriental biotic regions. Mountains reaching almost 2,000 m high dominate the island, and the property lies in the centre of the island, with arms stretching south, east and west to the coast.

The island ecosystem of Yakushima is unique in the Northern Hemisphere’s temperate area with successive vertical plant distributions extending from coastal vegetation with subtropical elements, up through a montane temperate rainforest to a high moor and a cold-temperate bamboo grassland at the central peaks.

The montane temperate rainforest of Yakushima is globally distinct, due to its peculiar ecosystem with abundant rheophytes and epiphytes that have adapted to the high rainfall, in excess of 8,000 mm annually, and resulting humid environment. Home to some 1,900 species and subspecies of flora, 16 mammal species and 150 bird species, it exhibits a rich biodiversity including the landscape of the Japanese cedar (Cryptomeria japonica), a primeval forest composed of trees called “Yakusugi”, which are over 1,000 years in age.

Criterion (vii): Yakushima, despite being a small island, boasts several key features including impressive mountains which rise to nearly 2,000 m, and an outstanding gradient from the high peaks of the central core down to the seacoast. The property is home to a number of extremely large diameter Japanese cedar trees, thousands of years old with the oldest and most spectacular individuals of the species found on Yakushima Island. It contains the last, best example of an ecosystem dominated by the Japanese cedar in a superb scenic setting. Thus, Yakushima is a valuable property having natural areas of biological, scientific and aesthetic significance on a small island.

Criterion (ix): Yakushima is an island ecosystem with high mountains––a characteristic rare in the region at around 30 degrees north latitude. It contains a unique remnant of a warm-temperate primeval forest which has been much reduced elsewhere in the region. These forests extend through an altitudinal sequence from the coast up to the central peaks. The property is very important for scientific studies on evolutionary biology, biogeography, vegetation succession, interaction of lowland and upland systems, hydrology, and warm-temperate ecosystem processes.

Yakushima comprises one single intact block of land containing a full representation of the different life-zones as well as the pristine and important forests in the centre of the island. The property spans an area from the western coastline to the 2,000 m summit of the island, retaining continuity of vertical vegetation distribution from coastal vegetation with subtropical elements to cold-temperate bamboo grassland and a high moor near the summit. It is an area of primeval warm-temperate forests that have not suffered from adverse effects of development with the conservation history of the property going back to 1924.

The boundaries of the property are complex with a number of historical and administrative factors influencing their location. Despite this the property includes all elements necessary to express its value, for example, encompassing a majority of the virgin forests of Japanese cedar, a Tertiary Period relic. The area of the property is 10,747 ha which occupies about 21% of the island, and it is of adequate size to maintain the value of the property for the long term.

The ancient Yakusugi trees found in the property are of prime conservation value. While impacts from tourism remain a concern the widespread public and political support for the property from the Government agencies, the Prefecture, the town, stakeholders and public bode well for the long-term integrity of the property.

Protected under several pieces of legislation, the majority of the Yakushima is national forest, owned and managed by the national government. Designated in the following protected areas: Yakushima Wilderness Area, Yakushima National Park, Special Natural Monument, and Yakushima Forest Ecosystem Reserve, each of these designations has a system to protect the natural environment of Japan and has strict legal regulations regarding development and other activities. Yakushima National Park was gazette as Kirishima-Yaku National Park in 1964 under the Natural Parks Law and became an independent park in 2012. A Wilderness area of 1,219 ha was designated under the Nature Conservation Law in 1975. This Wilderness area forms a small part of the centre of the property and in conjunction with the Special Protection Zone and the Class 1 Special Zone of the Yakushima National Park, the whole property is under strict protection. Further, a Special Natural Monument designated in 1954 under the Law for the Protection of Cultural Properties, a Forest Ecosystem Reserve designated in 1992 based on the Law on the Administration and Management of National Forests, and some other protected areas constitute the legal instruments used for protection and management of the property. The property adjoins national forests and national park areas, and these provisions intensify the protection of the property.

The Yakushima World Heritage Area Management Plan was formulated in 1995 by the management authorities of each system; the Ministry of the Environment, the Forestry Agency, and the Agency for Cultural Affairs, to facilitate smooth management of the multi-tiered protected area system and species, and the property is managed as a unit based on this plan. In 2012, Kagoshima Prefecture and Yakusima Town joined as the management authorities, and the Plan was revised. The Yakushima World Heritage Area Liaison Committee was established in 1995 by the local offices of these ministries and local governments, to promote conservation management of the property in collaboration and cooperation with the local community. Also, the Yakushima World Heritage Area Scientific Council, comprised of academics and relevant scientists, has been set up in 2009 and is promoting the adaptive conservation management of the property reflecting scientific knowledge.

To minimize the impacts of visitors, often concentrated in a certain place or at a certain time of the year, patrols are conducted and visitor facilities have been improved in landscape-conscious and environment-friendly ways. Comprehensive measures have been taken, including establishing visitor rules and promoting the dispersal of visitor use, while reflecting the opinions of stakeholders such as guides. Areas within the property show some negative impacts on vegetation from grazing by deer as a result of overpopulation. A working group has been established within the Scientific Council in 2010 to address this issue and countermeasures have been taken based on the scientific advice from the group.