The Cathedral of St Etienne of Bourges, built between the late 12th and late 13th centuries, is one of the great masterpieces of Gothic art and is admired for its proportions and the unity of its design. The tympanum, sculptures and stained-glass windows are particularly striking. Apart from the beauty of the architecture, it attests to the power of Christianity in medieval France. 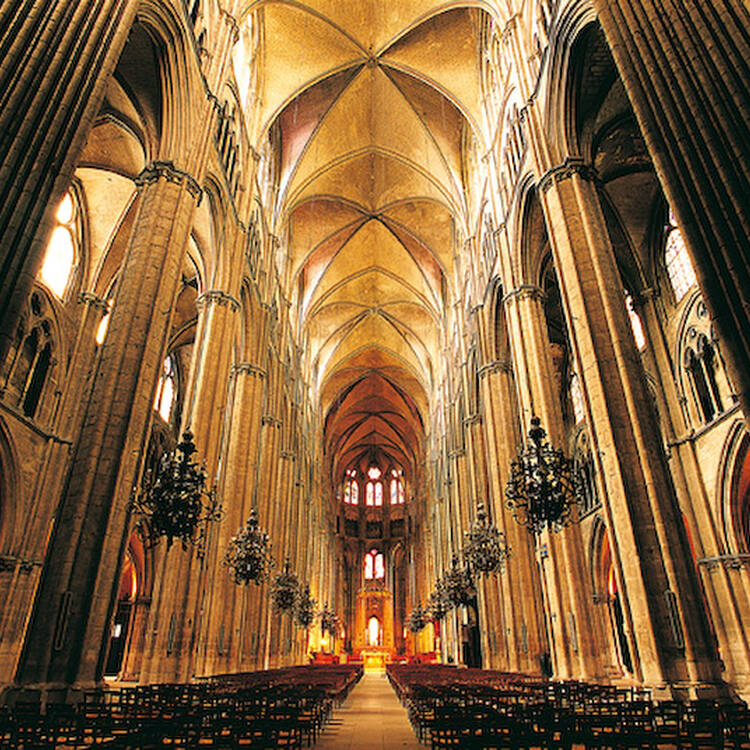 Bourges, the ancient Roman city of Avaricum, located in the Centre-Val-de-Loire region, was one of the first Christian communities of Gaul. The cathedral, which was dedicated to the first Christian martyr, Saint Etienne, occupies the site of a place of worship since the 3rd century. Built between the late 12th and late 13th centuries, it is one of the great masterpieces of Gothic art, and admired for its proportions and the unity of its design. Its tympanum, sculptures and stained-glass windows are particularly striking. Apart from the beauty of its architecture, it bears witness to the power of Christianity in medieval France.

The plan of the cathedral is simple and harmonious. It is a basilica with five naves and chapels surrounding the choir. Double flying buttresses allow for the absence of tribunes and provide equal luminosity throughout the nave and the side aisles.

The most remarkable characteristics of the cathedral are the perspective of the lateral walls and the unity of the interior space. The sculptures on the north and south doors, on the tympanum of the Door of the Last Judgement (at the centre of the west façade) and others like the sculpted rood screen comprise outstanding examples of Gothic art. The following centuries left their mark on the cathedral: the stained-glass windows hence comprise a true encyclopaedia of this art of the 14th, 15th and 16th centuries.

Criterion (i): Bourges Cathedral is of considerable importance in the development of Gothic architecture and as a symbol of the strength of Christianity in medieval France. However, its principal claim lies in its striking beauty, combining masterly management of space with harmonious proportions and decoration of the highest quality.

Criterion (iv): Although Bourges Cathedral lies outside the mainstream of the French Gothic, represented by St Denis, Paris, Chartres or Amiens, it strongly influenced the architectural values of cathedrals of this style. With the unity of its design, the skilful articulation of its spaces and the treatment of light, it represents an outstanding expression of style applied to this type of edifice.


The design of Bourges Cathedral has been respected and has remained unaltered over the centuries. It retains the integrity of its plan and design and all its attributes have been preserved intact. Located in a protected urban environment, the property has experienced no threat.

The shape and materials of the building are as they were when it was completed in the late 13th century, although its maintenance and the evolution of the religion have necessitated the replacement of numerous elements as is the case with all Gothic cathedrals. All the restoration work has respected the original techniques and construction materials.

Property of the State, managed in part by the National Monuments Centre, Bourges Cathedral has been listed as Historic Monument since 1862. As such, it enjoys conservation provisions as defined and directly executed by the Ministry of Culture and Communication.

Legally of the Catholic religion, the cathedral cannot be used for any other worship. The crypt and the terrace of the north tower receive about 30,000 visitors each year.

The buffer zone of the property, adopted in 2013, comprises two regulatory protective measures: on the one hand, the protection of its boundaries through its listing as Historic Monument, and on the other, the safeguarding and enhancement plan approved in 1994, for the outstanding heritage site corresponding to the acquisition of the medieval city. The marsh land located to the north-east of the edifice, the result of industrious work by the clergy to drain and cultivate this vast territory, was listed along with the sites.