Vlkolínec, situated in the centre of Slovakia, is a remarkably intact settlement of 45 buildings with the traditional features of a central European village. It is the region’s most complete group of these kinds of traditional log houses, often found in mountainous areas. 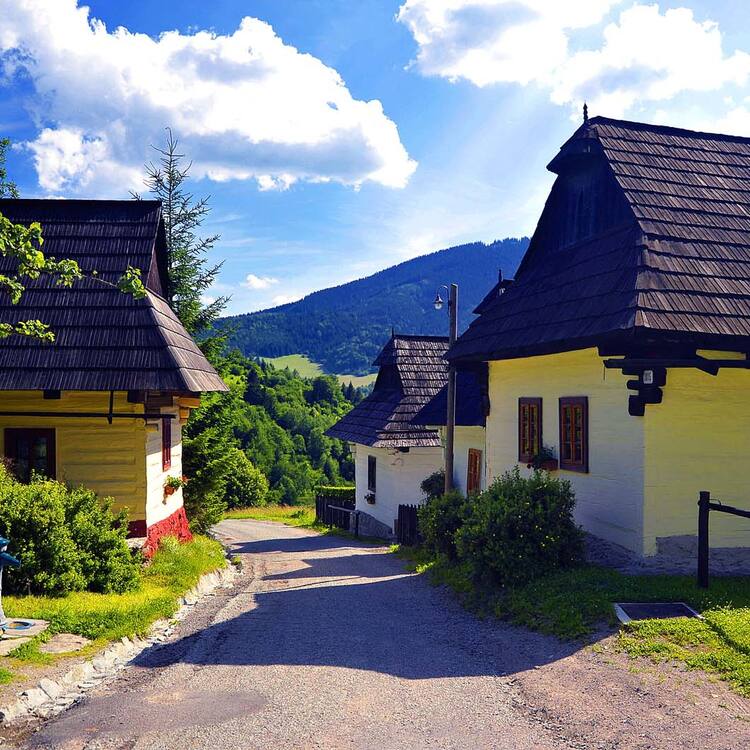 Vlkolínec is a 4.9 ha community forming an administrative part of the town of Ružomberok. It was historically referred to as a “street” of Ružomberok, yet is situated about 7 kilometres from the town itself, in the mountains of the northern part of central Slovakia. It is a remarkably well preserved rural medieval settlement featuring wooden architecture typical of hillside and mountain areas. Its layout, defined in part by the hilly terrain of the mountains of Veľká Fatra, features log houses situated on narrow lots with stables, barns and smaller outbuildings in the rear. A canalized stream flows through the centre of the village. The surrounding landscape is formed by narrow strips of fields and pastures with haylofts, protected from the north by the Sidorovo Hill.

Although the settlement has roots in the 10th century, its first records date to the late 14th century. The urban layout can be traced to this era as records indicate five streets in place by 1469. Most of the surviving buildings, however, date from the 19th century. These include 43 nearly intact homesteads that retain a multitude of archaic building elements, the Church of the Annunciation of the Virgin Mary built in 1875, a bell tower built in 1770, and a school.

The settlement and its surrounding landscape form a balanced urban unit with a significant interaction between nature and humans. Vlkolínec represents the region’s best preserved and most complex urban unit of original folk architecture consisting of wooden houses and outbuildings, the wooden bell tower and mural buildings of the church and school.

Criterion (iv): Vlkolínec is a remarkably intact rural settlement of a characteristic central European type with log-built architecture, which is often found in mountainous areas. The layout of the settlement has remained virtually unchanged and the architectural style has been fully retained. It is the best preserved and most comprehensive unit of its kind in the whole region.

Criterion (v): Vlkolínec is an outstanding example of a traditional Central European rural settlement, with 43 unaltered houses and ancillary buildings reflecting a multitude of archaic building elements, all set within a traditional farming landscape of strip fields which has become vulnerable due to the changed way of life.

All important elements necessary to convey the Outstanding Universal Value are contained within the boundaries of the property and Vlkolínec’s delimitation and size are appropriate. A row of buildings that was destroyed by fire during the Second World War have not been replaced. The buffer zone, which includes the surrounding fields and pastures, safeguards the property’s main views and prevents inappropriate developments.

The property is vulnerable to the impacts of tourism interfering with the inhabitants’ everyday life. The settlement’s character has been affected by the increase of temporary residents acquiring property for recreational purposes. In addition, outbuildings are particularly at risk due to high vacancy rates and lack of appropriate uses.

The historic character of the whole settlement featuring unaltered wooden log houses has been preserved primarily due to its isolated location. Authenticity of form and design is apparent in the original architectural style that survives virtually unchanged. Authenticity of use and function has been affected by modifications to building interiors in order to correspond with current dwelling standards.

All planned activities on the site are liable to strict assessment of the project documentation done by the Regional Monuments Board Žilina, office in Ružomberok. Principles of Care for Historic Monuments in the Vlkolínec Folk Architecture Reserve (1981, updated 1995) define appropriate conservation methods and techniques applicable for properties both within the reserve and its buffer zone. Change of use of buildings is only permitted if there are no material changes and must be approved by the regional monuments board.

The majority of the properties within the site are in private ownership. Notable exceptions are the approximately 10 properties owned by the local government (Ružomberok Municipality) and the church which is owned by the Roman Catholic Church.

The site is regularly assessed and monitored, and measures to prevent any potential threats are taken. The site management follows the Management Plan and is conducted by the Town Council of Ružomberok in close cooperation with the respective national authority, the Regional Monuments Board Žilina, Ružomberok office. To facilitate its effective protection and enhance the public awareness of the site’s values, Vlkolínec has been granted a specific statute by the town of Ružomberok.