The List Historic Town of Banská Štiavnica and the ...
Print

Over the centuries, the town of Banská Štiavnica was visited by many outstanding engineers and scientists who contributed to its fame. The old medieval mining centre grew into a town with Renaissance palaces, 16th-century churches, elegant squares and castles. The urban centre blends into the surrounding landscape, which contains vital relics of the mining and metallurgical activities of the past. 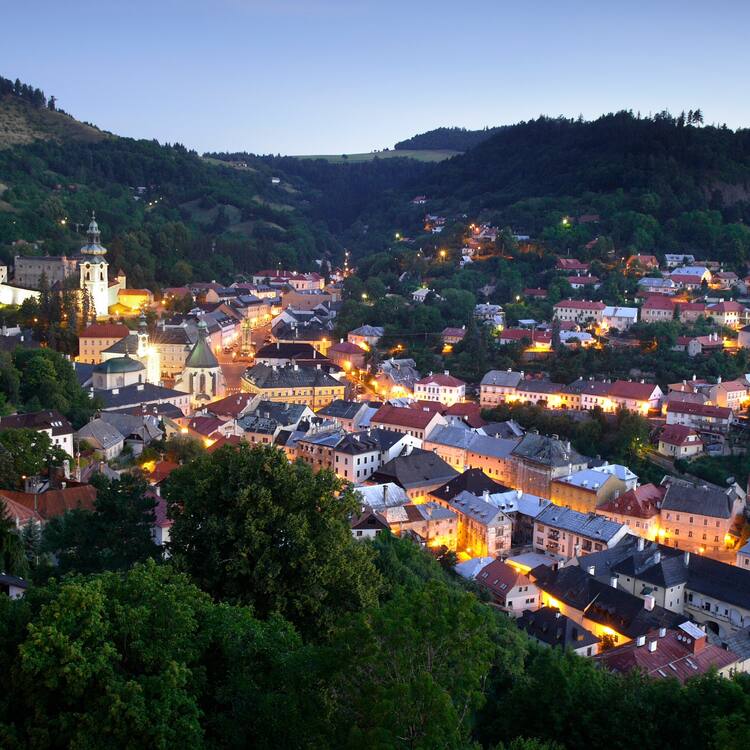 The Historic Town of Banská Štiavnica and the Technical Monuments in its Vicinity is an outstanding example of an important mining settlement that has developed since the Middle Ages. The property’s distinct form was created by the symbiosis of the industrial landscape and the urban environment resulting from its mineral wealth and consequent prosperity.

Located in the mountains of Štiavnické Vrchy, this extensive property covers a total area of 20,632 ha and includes the urban centre of Banská Štiavnica as well as the surrounding landscape featuring vital relics of the mining and metallurgical activities of the past, especially gold and silver. Most of the mining resources are located outside the urban area but within the Štiavnické Vrchy Protected Landscape Area.

The town of Banská Štiavnica, the oldest mining town in Slovakia, was established in the 13th century, although evidence of mining dates back to the late Bronze Age. While it served as an important town during the Middle Ages, the surviving urban centre was formed during the 16th century. It is characterized by the grand Late Gothic and Renaissance burgher houses, the town hall, and the Late Gothic Church of Saint Catherine. In the same era, a fortification system was built which has visible remains in the fortress of the Old Castle, the Renaissance watchtower of the New Castle, and the only surviving of the town gates – the Baroque-style Piarg Gate.

The establishment of the first Mining and Forestry Academy in Europe in 1762 demonstrates the importance of this town as a centre for the education of mining experts. Moreover, an extensive complex of technical works, connected with mining and processing of polymetallic ores, can be found in the town and in its vicinity. Surviving components include shafts, tunnels, mining towers, a knocking tower, and a sophisticated water management system. The system of artificially built water reservoirs – ponds and collecting ditches – built in the 16th century and developed in the 18th century, served the needs of the mining industry and provided fresh drinking water for the town. It was the most modern work of its type until the 19th century. After this time, the exhaustion of mineral resources has led to decline in the historic urban structure, the water management system, and much of the mining infrastructure.

Criterion (iv): The urban and industrial complex of Banská Štiavnica and the Technical Monuments in its Vicinity is an outstanding example of a medieval mining centre of great economic importance that continued into the modern period and assumed a characteristic and distinctive form.

Criterion (v): Banská Štiavnica and its surrounding area are an outstanding example of mining area which has become vulnerable to the potential erosion of its character and urban fabric, following the cessation of mining activities as well as the removal of the Mining Academy;

All important elements necessary to convey the Outstanding Universal Value are contained within the boundaries of the property. The property covers the urban centre of Banská Štiavnica and the surrounding landscape representing the evolution of the town and its industrial past from the Middle Ages featuring vital relics of mining and metallurgical activities. Its delimitation and size are appropriate. There is a risk to the property due to development pressure arising from a change in living standards as well as from an increase in tourism.

The property’s high authenticity is reflected in the original urban structure and landscape that developed as a result of exploitation of the polymetallic ores, especially gold and silver. Individual buildings survive with authenticity of design and material. The systematic restoration and reconstruction, undertaken after 1970, has been based on documentation focused on artistic, historical, architectural and archaeological studies, and further supported by other existing documents. Although new uses are being sought for some of the technical monuments, in response to a cessation of mining, the authenticity of the industrial resources is indisputable.

The components of the property within the Historic Town of Banská Štiavnica and the Technical Monuments in its Vicinity, fall within a variety of state, church and private ownership. The property’s management group, the Ministry of Culture, the Monuments Board, and the Ministry of Environment of the Slovak Republic have the overall responsibility for the protection of the property.

The property‘s protection is legislatively secured by the provisions of the Act No. 49/2002 Coll. on the protection of monuments and historic sites that refers to the protection of all cultural monuments and protected areas in the World Heritage property (Town Conservation Reserve of Banská Štiavnica, Town Conservation Reserve of Štiavnické Bane and Protected Historic Zone of Hodruša – Hámre). Technical monuments in the surrounding area are protected as national cultural monuments. The Slovak Republic has adopted the special Act No. 100/2001 Coll. on the protection and development of the town of Banská Štiavnica that refers to the whole World Heritage property. The Protected Landscape Area Štiavnické Vrchy provides protection to the property’s natural surroundings and forms a buffer zone of 62,128 ha under the provisions of the Act No. 543/2002 Coll. on the protection of nature and landscape. Some parts of the area are included in the Natura 2000 network. Additional protection tools include the urban planning documentation containing specific provisions to be respected in conducting all activities in the property. On a regular basis, the Outstanding Universal Value of the property is assessed and monitored, and measures for avoiding identified threats are taken.

The property‘s management is conducted by the Town of Banská Štiavnica in cooperation with the self-administration of the communities situated within the property, the Regional Monuments Board Banská Bystrica, the office in Banská Štiavnica and the Direction of the Protected Landscape Area Štiavnické Vrchy. There is a relatively complicated management system reflecting the property’s complexity. The management plan aims to create an efficient and coherent system of property management involving all relevant stakeholders and enhancing the public awareness of the property’s values and protection.