From the 13th century to the advent of the railway in the early 20th century, Safranbolu was an important caravan station on the main East–West trade route. The Old Mosque, Old Bath and Süleyman Pasha Medrese were built in 1322. During its apogee in the 17th century, Safranbolu's architecture influenced urban development throughout much of the Ottoman Empire. 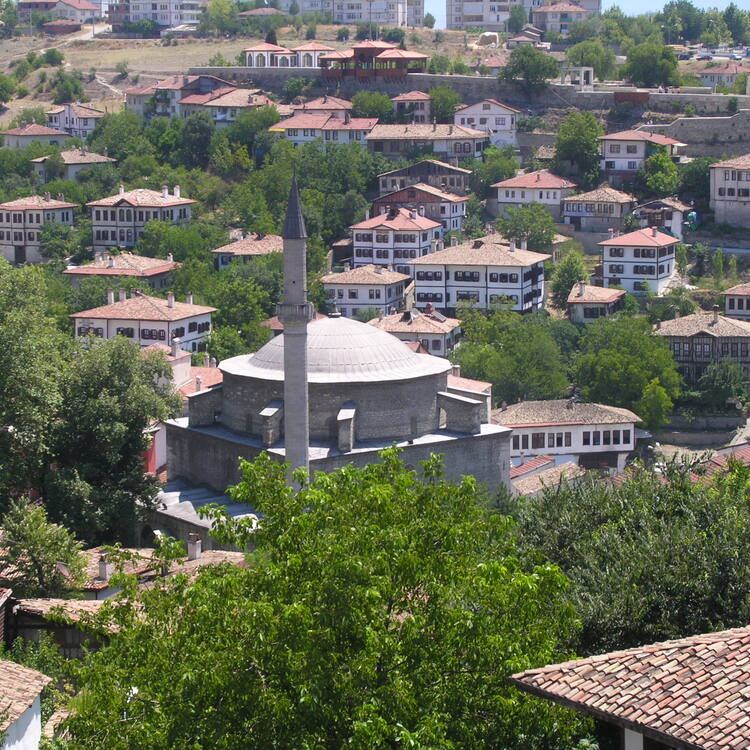 The City of Safranbolu is a typical Ottoman city, with typical buildings and streets, and played a key role in the caravan trade over many centuries. The settlement developed as a trading centre after the Turkish conquest in the 11th century, and by the 13th century, it had become an important caravan station. Its layout demonstrates the organic growth of the town in response to economic expansion, and its buildings are representative of its evolving socio-economic structure up to the disappearance of the traditional caravan routes and beyond.

Safranbolu consists of three distinct historic districts; the market place area of the inner city, known as Çukur, the area of Kıranköy, and Bağlar (the Vineyards). Çukur lies in the lower part of the town and has a triangular shape defined by two rivers. Its centre is the market place, surrounded by the houses and workshops of craftsmen. The segregation of the city centre is very typical for Anatolian cities. Kıranköy was formerly a non-Muslim district, with a socio-architectural pattern similar to that in contemporary European towns, with the artisans and tradesmen living above their shops. The houses in this district are built of stone, in contrast to the wooden houses in Çukur, which illustrates how the separation of Muslim and non-Muslim quarters during the Ottoman Period enabled each community to establish settlements according to their own traditions.

The pattern of settlement in Bağlar (the Vineyards) consists of single houses set within large gardens. This district on the northwest slope of the city, looking to the south, was the summer resort for the city.

The streets in Çukur and Kıranköy are narrow and curved, creating a wider view at the corners following topographic lines, and the various consoles of the houses contribute to creating interesting street perspectives. The streets feature stone paving, sloping inwards to evacuate surface water, and older houses are half-timbered, while the spaces between the timbers are filled with various building materials. There are no windows on the street frontage, so that stone walls resemble extensions of garden walls. The main rooms on the first floors are usually panelled with built-in cupboards, fireplaces, shelves and benches. Many of the ceilings are lavishly carved and painted. The rooms serve different purposes and are connected together with halls called “sofa”, which are very important elements of the house.

Criterion (ii): By virtue of its key role in the caravan trade over many centuries, Safranbolu enjoyed great prosperity. As a result, it set a standard in public and domestic architecture that exercised a great influence on urban development over a large area of the Ottoman Empire.

Criterion (iv): For centuries, the caravan trade was the main commercial link between the Orient and Europe. As a result, characteristic towns developed along its route. With the emergence of railways in the 19th century, these towns abruptly lost their raison d’être, and most of them were adapted to other economic purposes. After the collapse of the caravan trade, Safranbolu’s proximity to the Karabük steel works gave it a new socio-economic role, although it preserved its original form and buildings to a remarkable extent.

Criterion (v): Safranbolu is a typical Ottoman city that displays an interesting interaction between its topography and historic settlement.

The architectural features of the buildings and the street patterns continue to convey the Outstanding Universal Value of the property. The integrity of the historic settlement pattern within the three districts, Çukur, Bağlar (the Vineyards) and Kıranköy, are largely intact. Safranbolu has preserved its original appearance and buildings to a remarkable extent and the boundaries of the property are adequate to reflect the site’s significance. There have been no major changes to the integrity of the property since its inscription, but it remains vulnerable to external pressures, and continuous efforts are needed to better preserve the traditional townscape and retain its integrity.

There is no doubt about the authenticity of the street layout and the general townscape of Safranbolu, which is evocative of pre-industrial Turkey. However, the level of authenticity in individual buildings is largely related to changes that have occurred in the interior parts as a response to modern needs and industrialization. With tourism growth, there has been a trend to renovate houses and turn them into tourism facilities, e.g. hotels, restaurants, etc. Although this has played an important, revitalising role and contributed to the restoration and use of vacant historic buildings, careful monitoring is required to ensure that conditions of authenticity in terms of form and design continue to be met. Some of the factors that may threaten the authenticity of the property are inadequate tourism practices, predominantly the souvenir shops within the Çarşı region, the decreasing number of experienced local masters performing restoration works, and the deterioration of the traditional houses; those factors require monitoring and appropriate management measures.

The site was declared as urban and natural site according to the National Conservation Law No 2863. Management of the historic areas of Safranbolu is under the responsibility of the Municipality of Safranbolu and the approval of the Regional Conservation Council must be obtained for physical interventions and functional changes in registered buildings and conservation sites.

Resources for conservation, maintenance and protection action are derived from tourism activities, and are reinforced by amendments to the conservation legislation.

In addition, there is a Faculty of Architecture and a Vocational High School dedicated to restoration in Safranbolu, which provide technical support to the Municipality in the field of conservation. NGOs and the University contribute to raise public awareness in the City of Safranbolu.