León Viejo is one of the oldest Spanish colonial settlements in the Americas. It did not develop and so its ruins are outstanding testimony to the social and economic structures of the Spanish Empire in the 16th century. Moreover, the site has immense archaeological potential. 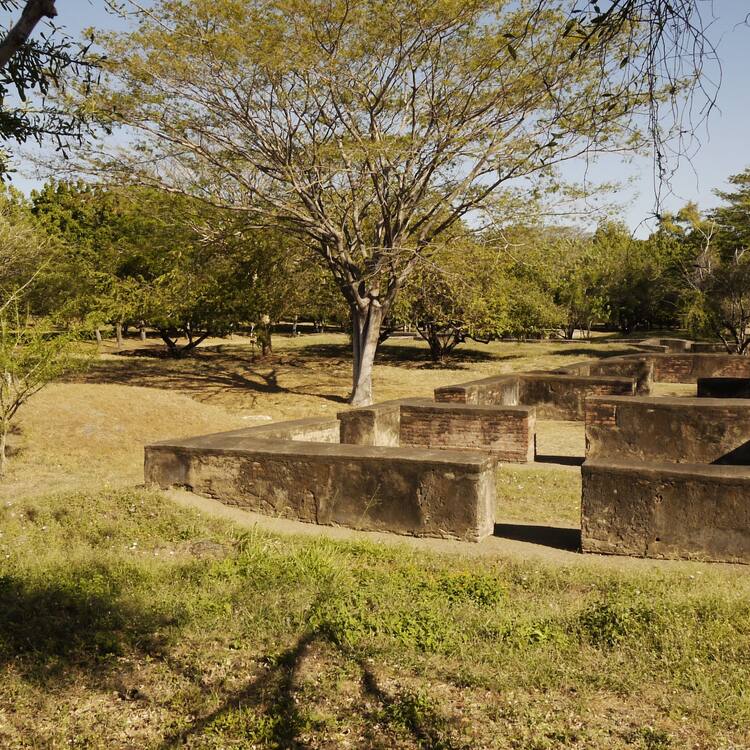 Ruins of León Viejo © OUR PLACE The World Heritage Collection

The Ruins of León Viejo are located near the town of Puerto Momotombo opposite the volcano of the same name, at the western end of Lake Managua, itself located 68 km from the capital of Managua. The archaeological site includes all vestiges unearthed to date and the surrounding area.

The Ruins of León Viejo are an exceptional testimony of the first European settlements in the New World. Founded in 1524 by Francisco Hernández de Córdoba, during its short history, the city has undergone a series of natural disasters. Partially destroyed by the Momotombo volcano that irrupted in 1578, the earthquake of 1610 struck the final blow by destroying what remained standing. The decision was taken to move the city and to rebuild it six leagues away. The gradual burial of the city due to natural disasters has preserved the vestiges unaltered and in the same environment, without having undergone any change.

The ruins extend over 31.87 ha. To date, 17 colonial structures have been discovered, among which stand out for their social importance:  the Cathedral of Santa María de la Gracia, the La Merced church and convent, the Casa de la Fundición (The Foundry) as well as other buildings for housing and civil and military installations. These structures all have a relatively simple shape and are built of  tapial.

As León Viejo did not develop, the ruins are a remarkable testimony to the economic and social structures of the Spanish Empire in the 16th century. The site preserves the original layout of the first cities founded by the Spaniards in the New World before the Laws of the Indies. It also testifies to experiments carried out on materials to find those that would be used in future colonial buildings erected in the Americas.

Criterion (iii): The ruined town of León Viejo provides exceptional testimony to the material culture of one of the earliest Spanish colonial settlements.

Criterion (iv): The form and nature of early Spanish settlements in the New World, adapting European architectural and planning concepts to the material potential of another region, are uniquely preserved in the archaeological site of León Viejo.

The space on which the Ruins of León Viejo lie contains the main material, architectural and urban elements of the old town of León founded in 1524 and which disappeared in 1610. The main urban roads (Calle Real - the Royal Road - and Plaza Mayor - the Grand-Place), and the most important buildings (religious, civil, and those for housing and military installations), which are fundamental and characteristic elements of the Spanish-American cities founded in the 16th century are clearly defined.

The abandon of the city in 1610 and its gradual burial helped preserve the ruins unaltered for over 350 years, until their discovery in 1967. Since then, excavations, building surveys, scientific studies and conservation works were carried out, which would ensure the preservation of the existing ruins and their exploitation in a sustainable manner with the participation- and for the benefit -- of the community.

Anthropogenic risks remain minor, because the ruins are in a sparsely populated area not developed an urban scale. The main threats to the integrity of the site are natural phenomena.

There is no doubt about the identification of the site. Excavations have proved that it is indeed the colonial city of León. The excavated vestiges are authentic, excluding some necessary interventions for their waterproofing.

The Ruins of León Viejo preserve the plans of a Spanish-American city founded during the first stage of the conquest and colonization of the American continent. They are the testimony to the use and application of materials and construction techniques of the Old World adapted to the environment and resources of the New World.

Without losing sight of the need to preserve their authenticity as ruins, it is possible to ensure their enhancement in a perspective of sustainable development, in accordance with normative legal instruments, studies and conservation plans implemented and for the benefit of local communities.

The protected area belongs to the State, and the peripheral zone which contains archaeological remains belongs to private owners.

The conservation of the Ruins and the Outstanding Universal Value they represent is achieved by the implementation of a management plan. The latter, which must be regularly updated, defines the response actions and those aimed at the enhancement of the site in a sustainable perspective. The management plan is implemented by the Nicaraguan Institute of Culture (State entity responsible for the administrative management of the listed site), in coordination with various national and local institutions.

The Nicaraguan Institute of Culture is committed to strengthening the conservation of the Ruins of León Viejo in designing and implementing normative instruments specific to the designated area and its buffer zone, and to providing financial support for the proper implementation of the management plan.