Heard Island and McDonald Islands are located in the Southern Ocean, approximately 1,700 km from the Antarctic continent and 4,100 km south-west of Perth. As the only volcanically active subantarctic islands they ‘open a window into the earth’, thus providing the opportunity to observe ongoing geomorphic processes and glacial dynamics. The distinctive conservation value of Heard and McDonald – one of the world’s rare pristine island ecosystems – lies in the complete absence of alien plants and animals, as well as human impact. 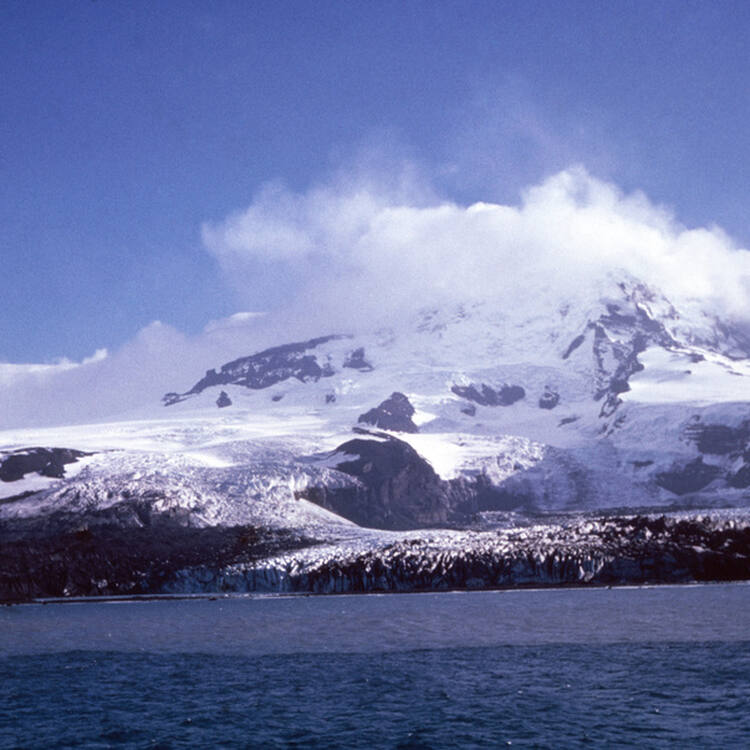 Heard and McDonald Islands are remote sub-Antarctic volcanic islands located in the southern Indian Ocean about half-way between Australia and South Africa, and just over 1,600 kilometres from Antarctica. The property covers a total area of 658,903 hectares of which about 37,000 hectares is terrestrial, and the remainder marine. The islands are a unique wilderness, containing outstanding examples of biological and physical processes continuing in an environment essentially undisturbed by humans.

Heard Island is dominated by Big Ben (an active volcano rising to a height of 2,745 metres), and is largely covered by snow and glaciers. McDonald Island is much smaller, covering only 100 hectares at the time of inscription, and is surrounded by several smaller rocks and islands. The only active sub-Antarctic volcanos are found on these islands, with the volcano on McDonald Island erupting after inscription and doubling the size of the island. The island group’s physical processes provide valuable indicators of the role of crustal plates in the formation of ocean basins and continents, of dynamic glacial changes in the coastal and submarine environment, and of atmospheric and oceanic warming. The large populations of marine birds and mammals, combined with a virtual absence of introduced species, provide a unique arena for the maintenance of biological and evolutionary processes.

Criterion (viii): The islands contain outstanding examples of significant on-going geological processes occurring in an essentially undisturbed environment, particularly physical processes which provide an understanding of the role of crustal plates in the formation of ocean basins and continents, and of atmospheric and oceanic warming. The islands are distinctive among oceanic islands in being founded upon a major submarine plateau which in this case deflects Antarctic circumpolar waters northwards, with striking consequences for geomorphological processes. They also offer an active example of plume volcanism, providing direct geological evidence of the action of the longest operational plume system known in the world. This includes information about plume interaction with overlying crustal plates, as well as insights into mantle plume composition due to the widest range of isotopic compositions of strontium, neodymium, lead and helium known from any oceanic island volcano system. Big Ben on Heard Island is the only known continuously active volcano on a sub-Antarctic island, whereas the volcano on MacDonald Island recently became active again after a 75,000 year period of dormancy, increasing significantly in size since inscription.

Heard Island’s relatively shallow and fast-flowing glaciers respond quickly to climate change, faster than any glaciers elsewhere, making them particularly important in monitoring climate change.  They have fluctuated dramatically in recent decades and have retreated significantly.

Criterion (ix): Heard Island and McDonald Islands are outstanding examples representing significant on-going ecological, biological, and evolutionary processes. As the only sub-Antarctic islands virtually free of introduced species and with negligible modification by humans, they are a classic example of a sub-Antarctic island group with large populations of marine birds and mammals numbering in the millions, but low species diversity. These intact ecosystems provide opportunities for ecological research investigating population dynamics and interactions of plant and animal species, as well as monitoring the health and stability of the larger southern oceans ecosystem. Areas of newly deglaciated land as well as areas isolated from each other by glaciers provide unparalleled opportunities for the study of the dispersal and establishment of plants and animals.

The islands also furnish crucial, alien-free habitat for large populations of marine birds and mammals, including major breeding populations of seals, petrels, albatrosses and penguins. Endemic species demonstrating ongoing evolutionary processes include the Heard Island cormorant, the endemic subspecies of the Heard Island sheathbill, and a number of endemic invertebrates (some endemic to Heard and McDonald Islands, and some endemic to the Heard and McDonald Islands-Kerguelen region).

The islands form a discrete entity of sufficient size to fulfil the conditions of integrity, plus are of very high wilderness quality and are the least disturbed of all sub-Antarctic islands.  They are subject to low anthropogenic pressures except for the largely unknown impact of commercial fisheries on the marine ecosystem. However, commercial fishing is not permitted within the property, or in the Marine Reserve within which it is located. Heard Island’s remoteness and harsh climate have ensured that human occupation, notably 19th century sealing, and research activity from 1947 to 1955, has been very restricted. The McDonald Islands have only had two brief visits, and there has been no protracted stay ashore on Heard Island since a winter research programme in 1992, the first winter occupation of the island since 1954.

The area is managed as a strict nature reserve (IUCN Category 1a) by the Australian Antarctic Division through the Australian Government’s Heard Island and McDonald Islands Marine Reserve Management Plan that covers marine reserves in the same region as well as the World Heritage Area.

The main management requirements are the maintenance of strict visitation and quarantine controls to maintain natural conditions and ecological integrity, and to prevent the introduction of pathogens and non-native species. Human activity in the reserve is expected to continue to slowly increase in line with interest in the region for science, tourism and fisheries. The management goal must be to prevent the introduction of alien species by minimising the risk of introductions occurring. Fisheries in the region require careful management to minimise the potential of adverse impacts on the marine-dependent fauna of the islands.

Importantly, this Act also aims to protect matters of national environmental significance, such as World Heritage properties, from impacts even if they originate outside the property or if the values of the property are mobile (as in fauna). It thus forms an additional layer of protection designed to protect values of World Heritage properties from external impacts. In 2007 the Heard and McDonald Islands World Heritage Area was added to the National Heritage List in recognition of its national heritage significance.