Paquimé, Casas Grandes, which reached its apogee in the 14th and 15th centuries, played a key role in trade and cultural contacts between the Pueblo culture of the south-western United States and northern Mexico and the more advanced civilizations of Mesoamerica. The extensive remains, only part of which have been excavated, are clear evidence of the vitality of a culture which was perfectly adapted to its physical and economic environment, but which suddenly vanished at the time of the Spanish Conquest. 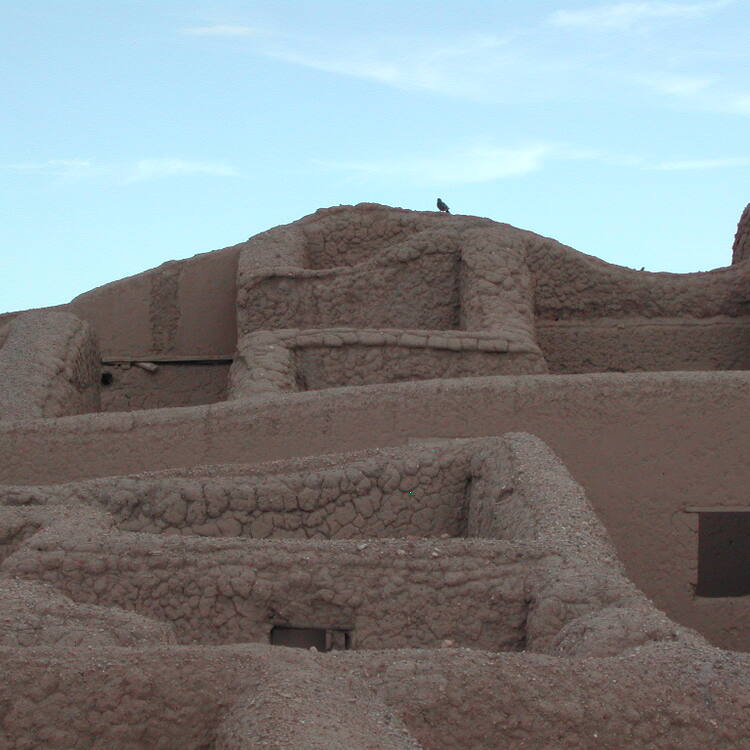 The archaeological zone of Paquimé is located in the Municipality of Casas Grandes, Chihuahua, Mexico. It is located at the foot of the Sierra Madre Occidental range near the headwaters of the Casas Grandes River. It is estimated to contain the remains of some 2,000 rooms in clusters of living rooms, workshops and stores, with patios. The predominant building material is unfired clay (adobe); stone is used for specific purposes, such as the lining of pits, a technique from central Mexico. The archaeological zone is distinguished by its impressive buildings in earthen architecture, mostly residential building structures that originally must have been several stories high and the remains of ceremonial monuments which have earthen architecture with masonry coatings. There are remains from of hundreds of rooms, with doors in a "T" shape and the prehispanic site still maintains its original planning on three axes: axis of housing units, the axis of squares, and the axis of ceremonial buildings.

It is the largest archaeological zone that represents the peoples and cultures of the Chihuahua Desert. Its development took place in the years 700-1475 and it reached its apogee in the 14th and 15th centuries. Its architecture marked an epoch in the development of the architecture of the human settlement of a vast region in Mexico and illustrated an outstanding example of the organization of space in architecture. Paquimé played a key role in trade and cultural contacts between the Pueblo culture of the south-western United States and northern Mexico and the more advanced civilizations of Mesoamerica. The extensive remains, only part of which have been excavated, are clear evidence of the vitality of a culture which was perfectly adapted to its physical and economic environment,

Criterion (iii) : Paquimé, Casas Grandes, bears eloquent and abundant testimony to an important element in the cultural evolution of North America, and in particular to prehispanic commercial and cultural links.

Criterion (iv) : The extensive remains of the archaeological site of Paquimé, Casas Grandes, provide exceptional evidence of the development of adobe architecture in North America, and in particular of the blending of this with the more advanced techniques of Mesoamerica.

The inscribed property, 146 hectares, contains the most significant archaeological remains to convey the Outstanding Universal Value of the property. As the site has remained largely unexcavated, there is still a high degree of material integrity. Conservation and maintenance interventions have maintained the attributes of the property and there are currently no large threats derived from development.

Preserved and protected as an exceptional archaeological zone, the changes in its appearance had been prevented as well as and any major reconstruction activity. The site is undoubtedly a major archaeological reserve and maintains a high degree of authenticity.

Conservation work is mainly limited to re-rendering the original walls with earthen materials, with the same nature and properties as the original, to maintain its physical integrity and leave a sacrificial layer exposed to weathering and subsequent decay.

The factors underpinning the authenticity of Paquimé are also linked to the characteristics and attributes of the cultural environment of the peoples of the Grande and Colorado rivers regions. These ties are manifested in Paquimé in the magnificence of the constructions, in the shapes of the buildings, its architectural finishes including the famous design form of “T” and facades with porticos

The area protected by the decree has also been integrated in the records of the Declaration of Area Landmarks and Urban Development Plan Casas Grandes Chihuahua and the Public Registry of Property at the Casas Grandes Municipality in Chihuahua.

The property is managed by the National Institute of Anthropology and History (INAH), through its regional office in Chihuahua, in collaboration with state and municipal governments. INAH has human resources for the implementation of site management and museum activities geared towards the conservation of the site.

The institute provide the funds for the operation of the site and the development of research and education, but these funds are limited, which causes delays in the implementation of conservation and management actions. These shortcomings are reflected in the needs for facilities both at the site and the museum, the maintenance of the perimeter, among others. Additional elements that have yet to be addressed are archaeological materials warehouses, a special library and research facilities.

The management and conservation of the property will need to promote education and outreach, particularly children's workshops, the production of workbooks for children of different ages, public lectures on the topics of culture. Efforts will also need to be focused on presentation and interpretation and in fostering the scientific value of the property through systematic research, the creation of specialised facilities regarding the Paquimé culture and the conservation of earthen architecture. Work on supporting national and international workshops on the conservation of earthen architecture should also be continued.