The List Collegiate Church, Castle and Old Town of ...
Print

Quedlinburg, in the Land of Sachsen-Anhalt, was a capital of the East Franconian German Empire at the time of the Saxonian-Ottonian ruling dynasty. It has been a prosperous trading town since the Middle Ages. The number and high quality of the timber-framed buildings make Quedlinburg an exceptional example of a medieval European town. The Collegiate Church of St Servatius is one of the masterpieces of Romanesque architecture. 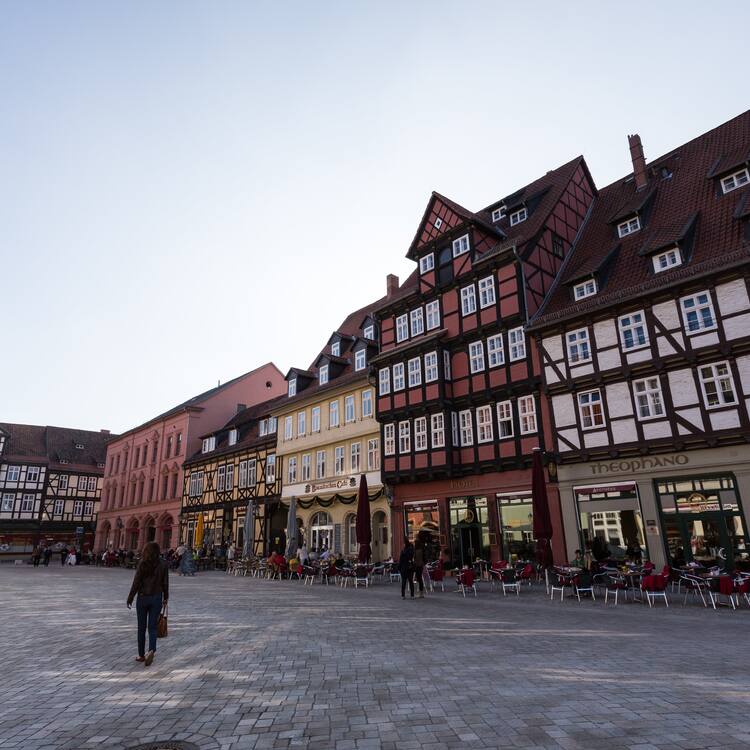 Quedlinburg, in the State of Sachsen-Anhalt, was a capital of the East Franconian German Empire at the time of the Saxonian-Ottonian ruling dynasty (919 to 1024). It has been a prosperous trading town since the Middle Ages. The number and high quality of the timber-framed buildings make Quedlinburg an exceptional example of a medieval European town.

The extraordinary and worldwide cultural importance of Quedlinburg is based on the close link between its history and architecture, which is intertwined with that of the Saxonian-Ottonian ruling dynasty. Following the coronation of Henry I (876 to 936), the first German King from the Saxonian dynasty, the royal residence of Quedlinburg became the capital of the East Franconian German Empire, the "metropolis of the Reich" of the first German state. A visible testimony to this dynasty is the Collegiate Church dedicated to St Servatius, which was one of the most highly esteemed churches of the Empire during the Middle Ages. Its crypt, with cross vaults, capitals, tombs, and murals, constitutes one of the most significant monuments in the history of art from the 10th to the 12th century. The crypt of the original building is included in the impressive church, which was built on a basilica floor plan from 1070 to 1129.

Quedlinburg is of interest in a variety of ways. For medievalists, the town is an outstanding example of Middle Age history. It illustrates the typical development of a medieval town, originating from a castle village and several separate settlements. Its value as a monument of urban architecture is based on the preservation of the town wall of 1330, its surviving urban relations of the old parishes of St Aegidius, St Blasius, St Benedictus, and St Nicolas, and the urban building patterns with medieval and post-medieval timber-framed houses.

The splendour of the metropolis of Quedlinburg from the 10th to the 12th century can be seen in the buildings on the castle hill. The ground plan and very likely some original pieces inside the house have survived from the surrounding residential town of that time. The market settlement with merchants and craftsmen to the west, and later to the north, of the castle hill combined with smaller settlements to form the town of Quedlinburg. Its foundation and development until the 18th century under rule of the Imperial foundation contributed significantly to the town’s overall structure and appearance. Quedlinburg experienced an economic boom during and immediately after the Thirty Years' War, and as a result, more timber-framed houses were built from the period of 1620 to 1720 than any comparable town in the region. This was the heyday of this type of architecture in Quedlinburg, and a number of special building types developed during this time.

Criterion (iv): Quedlinburg is an outstanding example of a European town with medieval foundations, which has preserved a high proportion of timber-framed buildings of exceptional quality.

The authenticity of Quedlinburg is irrefutable. Many of the buildings, especially the timber-framed residential structures, have undergone little or no modification over the course of the centuries. The policy of the former German Democratic Republic (GDR), which favoured the use of industrially prefabricated structures to replace buildings demolished in the late 1980s, has resulted in elements within the town where all authenticity of material and construction has been lost. However, these elements represent a relatively small proportion of the total building stock; moreover, in details such as scale, volume and window lines the overall townscape has been respected.

The historic town area is protected as a monument by the Law of Monument Conservation of State of Sachsen-Anhalt of 21 October 1991; the last amendment of this law (article no. 2) was in 2005. In addition, 770 individual buildings are protected as historic buildings. Regulations relating to urban reconstruction in the inner town are included in the Construction Decree of 28 March 1991 in its textual setting of 20 December 2005. A conservation area, according to article 2 of the Law of Monument Conservation, has been allocated as buffer zone in order to ensure the important views and visual characteristics of the property. Community involvement is an integral part of the planning system.

The buildings included in the property vary in ownership among the local authority (Stadt Quedlinburg), the Church, and private individuals. Direct management of individual properties remains the responsibility of the respective owners. However, the Town Council of Quedlinburg has initiated a number of projects designed to improve the management and preservation of the historic quarters of the town. These include new evaluation and recording of monuments, as required by the State of Sachsen-Anhalt Law of 1991; urban architecture studies for the preservation and development of Quedlinburg; preparation of new regulations relating to the historic sections of Quedlinburg; as well as optimisation, assessment, and control of construction work in the historic part of the town.

The project objectives adhere in every detail to international standards, such as the Venice Charter of 1964, and to the principles enunciated in the Operational Guidelines for the Implementation of the World Heritage Convention. The stakeholders act in coordination with the regional and local historic monument conservation authorities.

A Management Plan guarantees the comprehensive and permanent protection of the historic monuments and the sustainable urban development of the World Heritage property. This plan is yearly checked and updated when required.