Between 1696 and 1760, six ensembles of reducciones (settlements of Christianized Indians) inspired by the ‘ideal cities’ of the 16th-century philosophers were founded by the Jesuits in a style that married Catholic architecture with local traditions. The six that remain – San Francisco Javier, Concepción, Santa Ana, San Miguel, San Rafael and San José – make up a living heritage on the former territory of the Chiquitos. 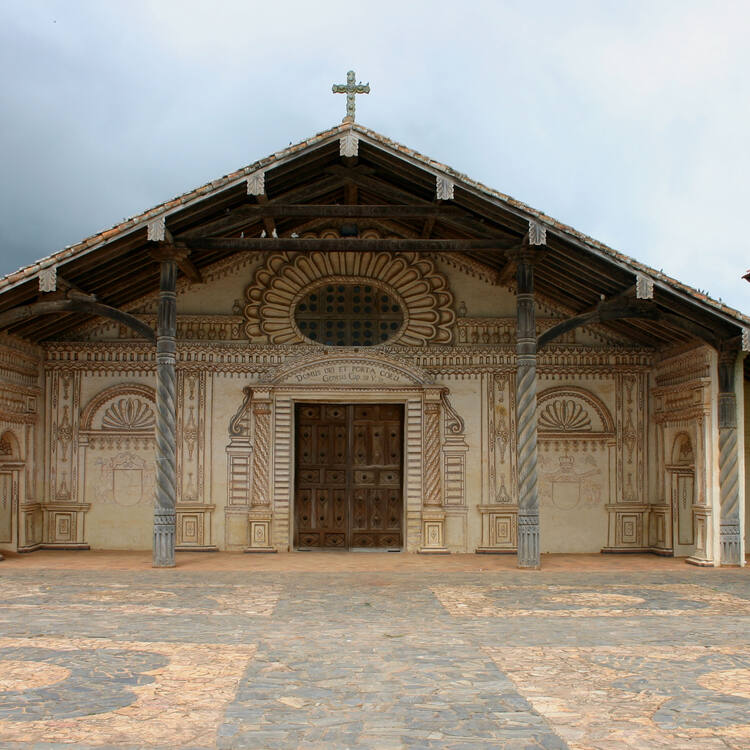 Between 1691 and 1760, a series of remarkable reducciones de indios (mission settlements of Christianized Indians) largely inspired by the “ideal cities” envisioned by 16th-century humanist philosophers was founded by the Society of Jesus in the Chiquitos territory of eastern Bolivia. Here on the semi-arid frontier of Spanish South America now known as Chiquitanía the Jesuits and their indigenous charges blended European architecture with local traditions. The six historic missions that remain intact – San Francisco Javier, Concepción, Santa Ana, San Miguel, San Rafael and San José – today make up a living yet vulnerable heritage in the territory of Chiquitanía.

The idealized urban model for the missions featured houses for the Indians regularly spaced along the three sides of a rectangular square, with the fourth side reserved for the church, workshops and schools. The churches are remarkable examples of the adaptation of European Christian religious architecture to local conditions and traditions. They resemble large houses with a gable roof overhanging a west gallery extended as a porch. Long walls defining three interior aisles divided by wooden columns and two exterior galleries, also supported by columns, constitute a unique type of architecture, distinguished by the special treatment of the carved wooden columns and banisters. The church at San José is the only exception, being of stone construction and inspired stylistically by a baroque model. In addition to rich interior decoration, many of these churches house remarkable popular art objects such as sculptures, paintings, altars and pulpits.

Unlike other Jesuit missions in South America, the Jesuit Missions of the Chiquitos survived the expulsion of the Society of Jesus in 1767, though by the 1850s the reducciones system of the missions had disappeared. These traditional architectural ensembles have more recently become vulnerable under the impact of changes following the agrarian reform of 1953 that threatened the local social and economic infrastructure.

Criterion (iv): The churches of the Jesuit Missions of the Chiquitos  in Bolivia, large houses with a double-sloping roof and large porch roof overhanging a west gallery, are a remarkable example of the adaptation of Christian religious architecture to local conditions and traditions. Long walls defining three interior naves divided by wooden columns and two exterior galleries, also supported by columns, constitute – except in the case of San José where construction, in stone, was inspired by a baroque model – a very unique type of architecture marked by the special treatment of the wooden columns and banisters.

Criterion (v) : These traditional architectural ensembles, that often enclose remarkable popular art objects (e.g., at the church of Santa Ana), have become vulnerable under the impact of changes that threatened the Chiquitos populations following the agrarian reform of 1953.

Within the boundaries of the Jesuit Missions of the Chiquitos are located all the elements necessary to express the Outstanding Universal Value of the property. The 7.160,75 has. that includes the urban centers of municipalities where are located the six Jesuit Missions of Chiquitos property’s boundaries are therefore adequate in size to ensure the complete representation of the features that convey the property’s significance, and the property does not suffer from adverse effects of development or neglect.

The Jesuit Missions of the Chiquitos is authentic in terms of the ensemble’s forms and designs, materials and substances, and locations and settings. Conservation and rehabilitation activities at the missions were undertaken from the 1970s through the 1990s by the Swiss architect Hans Roth and others. In general, the church restorations were oriented at structural reinforcement, restitution of lost parts, integration of murals, and recovery of mouldings and cornices (San Rafael, Santa Ana). Because the missions are located within villages, modernisation constitutes a permanent threat to the property.

The property is managed by the Ministry of Cultures of the Plurinational State of Bolivia. The Plan Misiones, Plan de Rehabilitación Integral de las Misiones Jesuíticas de Chiquitos (Comprehensive Rehabilitation Plan of the Jesuit Missions of Chiquitos) was created in 2007 by the Agencia Española de Cooperación Internacional (Spanish Agency for International Cooperation), the Diocese of San Ignacio de Velasco and the Vicariate of Ñuflo de Chávez. The central objective of the Plan Misiones has been to improve the living conditions of local people through the recovery, conservation and rehabilitation of the Chiquitano mission heritage. The plan has four main components: Planning, Regulations, Intervention, and Communication and Awareness. Building on a comprehensive heritage inventory, the Planning component includes Urban Management Plans (Planes de Ordenamiento Urbano (POU)) and Heritage Areas Revitalization Plans (Planes de Revitalización de Áreas Patrimoniales (PRAP)). These plans led to the identification and drafting of special plans such as the Improvement Plan for Housing and Public Spaces (Plan de Mejoramiento de Vivienda y Espacios Públicos (PMV)).

Sustaining the Outstanding Universal Value of the property over time will require ensuring this value as well as the authenticity and integrity of the property are not compromised by modernisation or other identified or potential threats. Because the missions are located within villages, modernisation constitutes a permanent threat to the site. Legal protection had therefore to be strengthened.