The List Renaissance Monumental Ensembles of Úbeda and ...
Print

The urban morphology of the two small cities of Úbeda and Baeza in southern Spain dates back to the Moorish 9th century and to the Reconquista in the 13th century. An important development took place in the 16th century, when the cities were subject to renovation along the lines of the emerging Renaissance. This planning intervention was part of the introduction into Spain of new humanistic ideas from Italy, which went on to have a great influence on the architecture of Latin America. 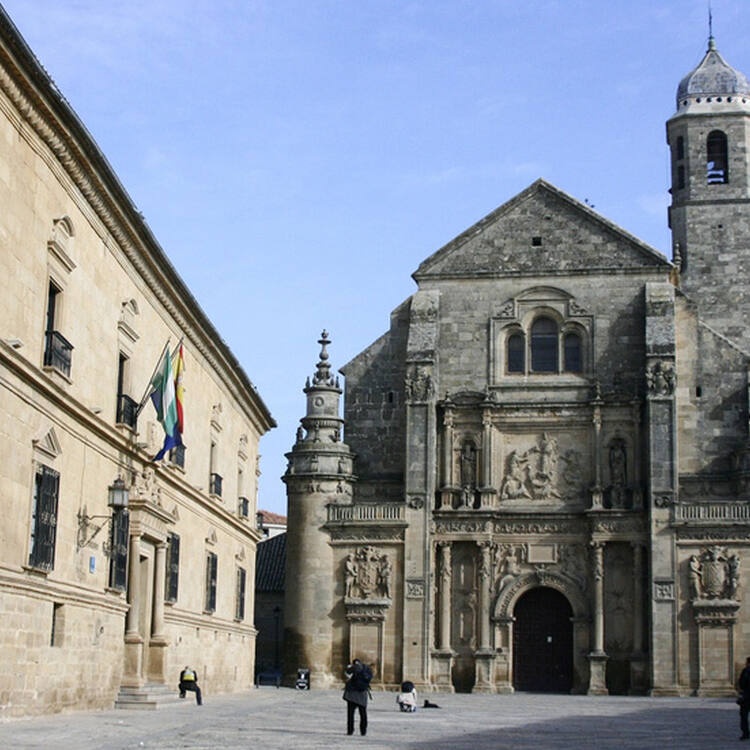 The most complete example of their architectural identity is the Plaza Vázquez de Molina in Úbeda, surrounded by civil and religious buildings built from 1530 to 1580, with special mention to the funeral chapel of El Salvador and the Vázquez de Molina Palace (today’s Town Hall). These form the greatest Renaissance architecture ensemble in Spain and one of the most important in Europe.

The main elements of the Baeza ensemble are the Cathedral and the Santa María Square, the old Seminary and the University. Known for its religious and educational uses, it became the site of the International University of Andalusia in the 1970s.

Úbeda and Baeza are early examples in Spain of the introduction of the Italian Renaissance design criteria. Furthermore, their considerable influence in Latin America has been well documented. The introduction of Renaissance interventions in an urban area originating from an Islamic period is also of interest.

The coexistence of cultures (Christian, Islamic and Jewish) favoured freedom and opening up to other influences, contributing an originality of artistic expression with great implications in Latin America.

This region has both Islamic roots and an intense medieval tradition in stonework. Stonemasonry was enriched by Andrés de Vandelvira, as described in the Libro de Traças de Cortes de Piedra (“Book of Stone-Cutting Designs”), written by his son Alonso, and considered the best compendium of Stereotomy in Europe until the end of the 17th Century. It had great influence on Latin American architecture.

The masters of Úbeda-Baeza greatly contributed to universal Renaissance culture, complementing Italian constructions with particular Islamic influences and the systematic use of stonemasonry.

Criterion (ii): The 16th-century examples of architectural and urban design in Úbeda and Baeza were instrumental in introducing the Renaissance ideas to Spain. Through the publications of Andréa Vandelvira, the principal project architect, these examples were also diffused to Latin America.

The Renaissance Monumental Ensembles of Úbeda and Baeza reflect the important transformations which occurred to these cities with their Islamic past and later Mudéjar tradition, during the 16th Century, with the advent of the Renaissance. Thus, they comprise an urban dimension, which along with the architectural one, are the essential attributes of their Outstanding Universal Value.

Úbeda and Baeza have retained a large part of their historic fabric. The walled town of Úbeda maintains the overall character of traditional housing developed since the Middle Ages; only the major streets were renovated in the 19th century, and, besides, most commercial activities have been undertaken outside the medieval walls. In Baeza, the eastern part of the old town is best preserved, while the western part has some recent constructions near the former Alcázar site which, like that of Úbeda, has remained vacant. The property includes leading Renaissance monumental elements.

Baeza Cathedral reflects the juxtaposition of different styles: the primitive mosque that has Gothic-Moorish elements and subsequent Renaissance influences of Vandelvira; the Church and particularly the Sacristy of El Salvador and the Palaces of Vázquez de Molina and Deán Ortega in Úbeda, also by Vandelvira, have been kept in their original state, except for necessary changes carried out for their present-day use. Most of the remaining buildings from different periods have the mark of the Renaissance style.

The condition of both ensembles is excellent, given their highly institutional character. In Úbeda, they are used for several administrative headquarters, religious purposes and a Parador (state-run hotel). In the ensemble of Baeza some buildings have been renovated to house the International University of Andalusia, such as the old Seminary and the marvellous Palace of Jabalquinto.

In addition to architectural integrity, there is the perfect urban planning of the public spaces that contain these buildings. Some of these spaces have been renovated and redeveloped in keeping with the original work.

This area has low seismic hazard in absolute terms, though the risk is a little higher here than in the rest of the Spanish territory. Pollution problems from a nearby factory in Baeza are being resolved.

The importance of the Renaissance Monumental Ensembles of Úbeda and Baeza in their surrounding territories is an exceptional example of the complementary duality held by these two cities in the region of La Loma, since the 16th century (period of their socioeconomic growth).

This duality can be most clearly seen through their monumental ensembles, which are outstanding examples of the distribution of urban functions. Both monumental ensembles of Baeza (with public, ecclesiastic and educational functions) and Úbeda (with noble and palatial functions) have a Renaissance urban plan which has acquired its own identity and has continuing authenticity of form and design.

Material authenticity also stems from the historic buildings in the two inscribed areas. Belonging to different styles and periods (the Renaissance style prevailing), these possess a high degree of authenticity, which can be seen not only in their actual façades but also in their architectural style, representing the different social classes and explaining their building heritage.

The existence of urban and heritage protection mechanisms ensures that the Outstanding Universal Value is maintained. The inscribed areas form part of zones which have been declared Historic Ensembles, and thus come under Special Protection Plans and Inventory. Moreover, individual buildings have the maximum level of protection existing in both regional and state Heritage Legislation, as they have been declared Property of Cultural Interest under the category of Monuments.

The Special Protection Plans and Inventory lay out the protection conditions for the maintenance of their urban and architectural structure and of their traditional urban image. These Plans have a broad urban content and not only protect the values using specific regulations but they propose urban restoration and recovery.

The Special Plans have been endorsed by the respective Local General Plans: Úbeda (1997 and 2009 Advance Review) and Baeza (2011 Review), which promote the value of these Monumental Ensembles as functional centres and symbolic spaces, as well as protecting the surrounding countryside. The planning respects the present-day use of the Monumental Ensembles and contemplates actions to improve the historic centres: a functional revival and improvement of conditions of access, pedestrian mobility and parking.

By means of the co-operation agreement of 1999, Úbeda and Baeza Town Councils coordinated and developed heritage management concerning conservation and restoration, culture and tourism, setting out sustainable interventions to recover their respective historic centres.

The respective historic centres (Úbeda 2005 and Baeza 2006) were declared State-aided Restoration Areas. This has led to many public interventions: improving urban planning of public spaces, restoring the city walls and unique buildings, restoring houses and associated infrastructure. Since March 2009, this liaison has been carried out by means of the “Association for Tourist Development of Úbeda and Baeza”, through the Sustainable Tourism Plan “Úbeda/Baeza, the Open Renaissance Museum”.

Different actions are necessary in each city, in particular the Comprehensive Plan of Accessibility, the creation of Park and Ride areas, traffic restrictions, urban development of public spaces, and heritage signposting. The Renaissance Monumental Ensembles of Úbeda and Baeza will thus become a heritage management model for other medium-sized Andalusian cities.