This site, which was the capital of Lycia, illustrates the blending of Lycian traditions and Hellenic influence, especially in its funerary art. The epigraphic inscriptions are crucial for our understanding of the history of the Lycian people and their Indo-European language. 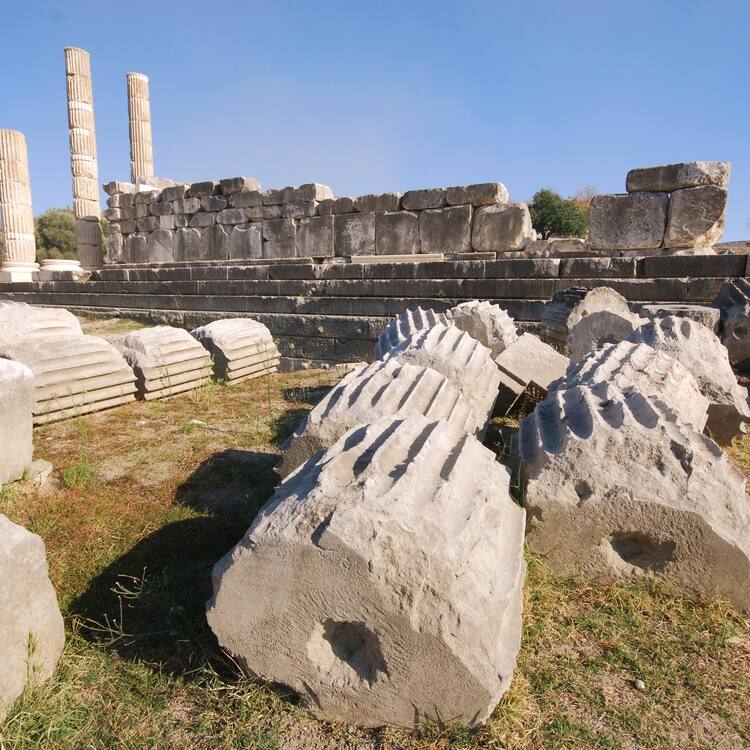 Xanthos-Letoon © Ministry of Culture and Tourism

Made up of two neighboring settlements located in the southwestern part of Anatolia, respectively within the boundaries of Antalya and Muğla Provinces, Xanthos-Letoon is a remarkable archaeological complex. It represents the most unique extant architectural example of the ancient Lycian Civilization, which was one of the most important cultures of the Iron Age in Anatolia. The two sites strikingly illustrate the continuity and unique combination of the Anatolian, Greek, Roman, and Byzantine civilizations. It is also in Xanthos-Letoon that the most important texts in Lycian language were found. The inscriptions engraved in rock or on huge stone pillars on the site are crucial for a better understanding of the history of the Lycian people and their Indo-European language.

Xanthos, which was the capital of ancient Lycia, illustrates the blending of Lycian traditions with the Hellenic influence, especially in its funerary art. The rock-cut tombs, pillar tombs and pillar-mounted sarcophagi in Xanthos are unique examples of ancient funerary architecture. Their value was already recognized in Antiquity and they influenced the art of neighboring provinces: the Mausoleum of Halicarnassus is for instance directly influenced by the Xanthos Nereid Monument. The fact that some architectural and sculptural pieces of the sites were taken to England in the 19th century, including the Monument of Harpy, the Tomb of Payava and the Nereid Monument, led to their word-wide recognition, and consequently the Xanthos marbles became an important part of the history of ancient art and architecture.

East of the Xanthos River (Eşen Çayı), the first monumental zone includes the old Lycian Acropolis, which was remodeled during the Hellenistic and Byzantine periods. At that time, a church was built at the northeast corner, while an advanced defensive structure fortified the western side of the citadel along the river. Directly north of the Acropolis stands a very beautiful theatre that dominates the Roman agora. This area also features great Lycian funerary monuments imitating woodwork, which are characteristic of the archaeological landscape of Xanthos and rise up spectacularly from the ruins. There is a second, more complex archaeological zone that extends between the Vespasian Arch to the south and the Hellenistic Acropolis to the north. The lower part of the town, which includes the Hellenistic Agora and Byzantine churches, was located in this part of the site.

Letoon, on the other hand, was the cult center of Xanthos, the ancient federal sanctuary of the Lycian province and Lycian League of Cities. As many inscriptions found at the site demonstrate, the federal sanctuary was the place where all religious and political decisions of the ruling powers were declared to the public. The famous trilingual inscription, dating back to 337 B.C., features a text inLycian and Greek as well as an Aramaic summary and was discovered near the temple of Apollo. In the sanctuary of Letoon, three temples are dedicated to Leto, Artemis and Apollo. In addition, the site includes the ruins of a nymphaeum dating back to Hadrian, built on a water source that was considered sacred.

Criterion (ii): Xanthos-Letoon directly influenced the architecture of the principal ancient cities of Lycia such as Patara, Pınara, and Myra, as well as the neighboring provinces. The Halicarnassus Mausoleum, which was ranked as one of the Seven Wonders of the Ancient World, is directly influenced by Xanthos’ Nereid Monument.

Criterion (iii): Xanthos-Letoon bears exceptional testimony to the Lycian civilization, both through the many inscriptions found at the two sites and through the remarkable funerary monuments preserved within the property. The longest and most important texts in the Lycian language were found in Xanthos-Letoon. The inscriptions, most of which were carved in rock or on huge monoliths, are considered exceptional evidence of this unique and long-forgotten Indo-European language. The rock art tombs, pillar tombs and pillar-mounted sarcophagi represent a novel type of funerary architecture. The rich series of Lycian tombs in Xanthos and Letoon enable us to fully understand the successive acculturation phenomena that took place in Lycia from the 6th century onwards.

The inscribed property includes all the necessary attributes, mainly original monuments and archaeological remains, which convey its Outstanding Universal Value. All components remain largely intact and are not affected by the negative effects of tourism or modern settlements.

Today, the only factor threatening the integrity of the property is the paved road that has crossed the antique city for many years. Within the framework of the revised Conservation Legislation put into force in 2004, the Regional Council for Conservation of Cultural Heritage decided to close this road in 2010. In addition, wire fence was used to surround the area. However, as these measures could not be implemented efficiently, further action is necessary to ensure that the integrity of the property is no longer impacted. These include the rerouting of the road according to suggestions made in the Conservation Plan.

Xanthos-Letoon has retained the authenticity of its features, largely due to the property’s distance from any modern settlement.

The monuments revealed during archaeological excavations have gone through important restoration and conservations works, which have not impacted their authenticity in terms of design and layout. The most important project was the reconstruction of the temple of Leto in its original setting between 2000 and 2007. The architectural pieces that belonged to the temple of Leto, which were found during excavations carried out since 1950s, enabled the successful completion of this project. Some important restoration, conservation and consolidation works were also carried out on the Early Christian Church and monumental nymphaeum.

The monuments and archaeological remains within the sanctuary of Letoon are threatened by seasonal rising of the ground water table. Mitigation efforts were made in 2006 with the construction of water channels to lessen the level of water during excavation works. Another issue for Letoon is the visual pollution created by many greenhouses in the fertile alluvial lands of the site. As for Xanthos, the presence of the paved road cutting through the site requires additional measures to be fully addressed.

The Ministry of Culture and Tourism has started works for the preparation of a Landscaping Project for Xanthos and Letoon that will address the issues of the property, including environmental control and the preservation of the monuments. Within the framework of this project, the site of Letoon will be equipped with recreation and promenade areas. This project will also address questions of visitor management, develop awareness-raising policies, and aim to actively involve both the local communities and the visitors.