The List Trinidad and the Valley de los Ingenios
Print

Founded in the early 16th century in honour of the Holy Trinity, the city was a bridgehead for the conquest of the American continent. Its 18th- and 19th-century buildings, such as the Palacio Brunet and the Palacio Cantero, were built in its days of prosperity from the sugar trade. 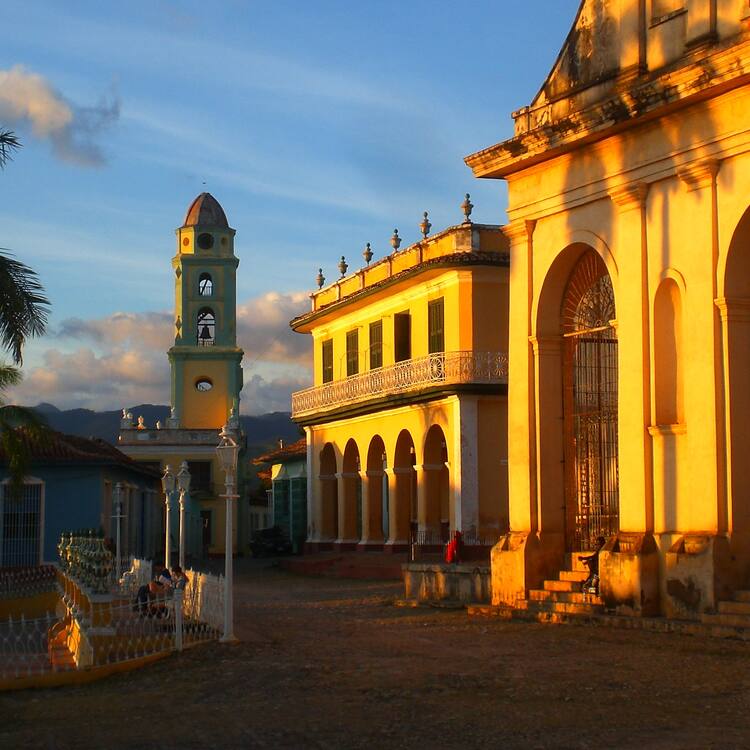 Trinidad, located in the central Cuban province of Sancti Spíritus, was founded in the early 16th century but owes its existence and its historical raison d’être to the sugar industry that flourished there and in the nearby Valley de los Ingenios (Valley of the Sugar Mills) from the late 18th century to the late 19th century. The exemplary city of Trinidad’s prosperity during this period is clearly legible in its existing built environment, its buildings ranging in expression from modest, vernacular variants to elaborate, luxurious edifices. The Valley de los Ingenios is a remarkable testimony to the development of the sugar industry. A living museum of Cuban sugar production, it includes the sites of 75 former cane sugar mills, plantation houses, barracks and other facilities related to this vulnerable industry, which has witnessed a gradual and progressive decline.

Trinidad’s urban ensemble of domestic buildings has an exceptional typological continuity and homogeneity in terms of construction and design, in a vernacular fashion nuanced by small- to medium-sized lots, in which early 18th century buildings strongly marked by Andalusian and Moorish influences blend harmoniously with more elaborate 19th-century models that splendidly mix European neoclassical forms, superimposed on traditional spatial patterns. The heart of the 37-ha historic centre is Plaza Mayor, on which, overlooked by the campanile of the Convento de San Francisco, stand two noteworthy edifices: the Palacio Brunet, which provides the most authentic picture of the golden age of the city; and the neoclassical-style Palacio Cantero, which now houses the municipal history museum. In addition to its architecture, much of Trinidad’s urban fabric, including the irregular system of squares and plazas, cobblestone streets and other historical and urban elements, has been preserved.

Twelve kilometres northeast of Trinidad are three interconnected rural valleys – San Luis, Santa Rosa and Meyer – that make up the 225-km2 Valley de los Ingenios. More than fifty sugar mills were in operation here at the industry’s peak in the 19th century, and in 1827 more than 11,000 slaves were working in the mills. A long, gradual decline in Cuba's sugar industry accelerated significantly in the 1990s. The former plantations, mill buildings and other facilities and archaeological sites in the Valley de los Ingenios represent the richest and best-preserved testimony of the Caribbean sugar agro-industrial process of the 18th and 19th centuries, and of the slavery phenomenon associated with it.

Criterion (iv) : Shaped by the region’s 18th- and 19th-century sugar industry, the exemplary city of Trinidad owes to sugar its continued existence and its historical raison d’être, which is clearly legible in the existing built environment of the city and the nearby Valley de los Ingenios.

Criterion (v): The Valley de los Ingenios is a remarkable testimony to the development of the sugar industry and a living museum featuring 75 former sugar mills, plantation houses, barracks and other facilities related to this vulnerable industry.

Within the boundaries of Trinidad and the Valley de los Ingenios are located all the elements necessary to express its Outstanding Universal Value, including buildings, structures, public spaces, landscape components and archaeological remains. Population growth areas have been located outside the property. The 225.37-km2 property is of sufficient size to adequately ensure the complete representation of the features and processes that convey the property’s significance, and it does not suffer from adverse effects of development and/or neglect.

The historical process of land degradation in the valley, one of the reasons for its decline the past (along with water shortages), has led to a decrease in the cultivation of sugarcane. Although most farms are in ruins, as a whole they have a high degree of integrity due to the presence of a large proportion of the attributes that enabled them to function as a system, such as roads, the railway, the river, etc. It was strongly recommended in 1988 that the environment of the city, sugar mills and valley be protected from tourism development.

Trinidad and the Valley de los Ingenios is authentic in terms of locations and settings, forms and designs, and materials and substances. Because Trinidad is comprised predominantly of single-family houses, the overcrowding common to other historic centres has been avoided, thereby contributing greatly to the retention of the original interiors. The use of centuries-old techniques and building materials has persisted, including traditional lime mortar, wood, terracotta clay roofing tiles and cobbled streets. The Valley contains vestiges of farms in different states of conservation, many houses and huts, the components of the sugar industry, and remains of the main activity – sugarcane cultivation – and of the rail and road network. The property’s attributes thus express its Outstanding Universal Value truthfully and credibly.

Trinidad and the Valley de los Ingenios is largely owned by the Cuban state, with some parts owned by private individuals or legal entities. The inscribed property is protected by provisions in the Constitución de la República de Cuba (Constitution of the Republic of Cuba) of 24 February 1976 and by National Monuments Commission Resolution 3/1978 designating Centro Histórico Urbano Trinidad and Resolution 3A/1989 designating Valle de los Ingenios as National Monuments, in application of the Ley de Protección al Patrimonio Cultural (Law on the Protection of Cultural Property, Law No. 1 of 4 August 1977), and the Ley de Monumentos Nacionales y Locales (Law on National and Local Monuments, Law No. 2 of 4 August 1977). In addition to national laws and regulations, the city is protected by local provisions such as the Reglamento para la protección del centro histórico urbano de Trinidad y los monumentos de su municipio (Regulations for the Protection of the Historic Urban Centre of Trinidad and the Monuments of the Municipality), adopted in 1982 by the Executive Committee of the Asamblea Municipal del Poder Popular (Municipal Assembly of People’s Power). These Regulations determine the limits of the Historic Urban Centre and the Zone of Protection, and the permissible actions in each case as well as those advisable for monuments in the city.

Sustaining the Outstanding Universal Value of the property over time will require updating, approving and implementing an integrated Conservation Management Plan for the entire inscribed property; mitigating the historical process of land degradation in the valley; ensuring that the environment of the city, sugar mills and valley are protected from tourism development; ensuring that the Outstanding Universal Value as well as the authenticity and integrity of the property are not compromised by identified or potential threats; and establishing monitoring indicators.