The mausoleum of Antiochus I (69–34 B.C.), who reigned over Commagene, a kingdom founded north of Syria and the Euphrates after the breakup of Alexander's empire, is one of the most ambitious constructions of the Hellenistic period. The syncretism of its pantheon, and the lineage of its kings, which can be traced back through two sets of legends, Greek and Persian, is evidence of the dual origin of this kingdom's culture. 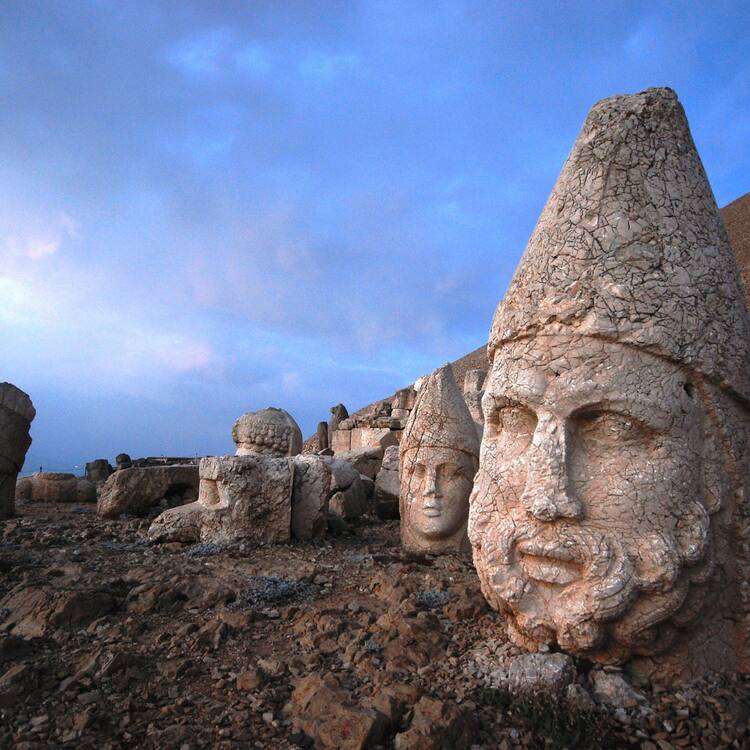 Crowning one of the highest peaks of the Eastern Taurus mountain range in south-east Turkey, Nemrut Dağ is the Hierotheseion (temple-tomb and house of the gods) built by the late Hellenistic King Antiochos I of Commagene (69-34 B.C.) as a monument to himself.

With a diameter of 145 m, the 50 m high funerary mound of stone chips is surrounded on three sides by terraces to the east, west and north directions. Two separate antique processional routes radiate from the east and west terraces. Five giant seated limestone statues, identified by their inscriptions as deities, face outwards from the tumulus on the upper level of the east and west terraces. These are flanked by a pair of guardian animal statues – a lion and eagle – at each end. The heads of the statues have fallen off to the lower level, which accommodates two rows of sandstone stelae, mounted on pedestals with an altar in front of each stele. One row carries relief sculptures of Antiochos’ paternal Persian ancestors, the other of his maternal Macedonian ancestors. Inscriptions on the backs of the stelae record the genealogical links. A square altar platform is located at the east side of the east terrace. On the west terrace there is an additional row of stelae representing the particular significance of Nemrut, the handshake scenes (dexiosis) showing Antiochos shaking hands with a deity and the stele with a lion horoscope, believed to be indicating the construction date of the cult area. The north terrace is long, narrow and rectangular in shape, and hosts a series of sandstone pedestals. The stelae lying near the pedestals on the north terrace have no reliefs or inscriptions.

The Hierotheseion of Antiochos I is one of the most ambitious constructions of the Hellenistic period. Its complex design and colossal scale combined to create a project unequalled in the ancient world. A highly developed technology was used to build the colossal statues and orthostats (stelae), the equal of which has not been found anywhere else for this period. The syncretism of its pantheon and the lineage of its kings, which can be traced back through two sets of legends, Greek and Persian, is evidence of the dual origin of this kingdom's culture.

Criterion (i): The tomb of Antiochos I of Commagene is a unique artistic achievement. The landscaping of the natural site of Nemrut Dağ is one of the most colossal undertakings of the Hellenistic period (some of the stone blocks used weigh up to nine tons).

Criterion (iii): The tomb or the Hierotheseion of Nemrut Dağ bears unique testimony to the civilization of the kingdom of Commagene. Antiochos I is represented in this monument as a descendant of Darius by his father Mithridates, and a descendant of Alexander by his mother Laodice. This semi-legendary ancestry translates in genealogical terms the ambition of a dynasty that sought to remain independent of the powers of both the East and the West.

Criterion (iv): More so than the tombs at Karakus and Eski Kahta, the tumulus at Nemrut Dağ illustrates, through the liberal syncretism of a very original pantheon, a significant, historical period. The assimilation of Zeus with Oromasdes (the Iranian god Ahuramazda), and Heracles with Artagnes (the Iranian god Verathragna) finds its artistic equivalent in an intimate mixture of Greek, Persian and Anatolian aesthetics in the statuary and the bas-reliefs.

Nemrut Dağ is largely intact and truthfully and credibly expresses it Outstanding Universal Value. The important cult areas of Commagene still exist, the structures are the original ones and their original interrelations can still be observed and perceived.  Although the property boundary contains the tumulus and the east, west and north terraces, it does not include the full extent of the ceremonial routes. The greatest threat to the integrity of the property is the material damage caused by environmental conditions such as serious seasonal and daily temperature variations, freezing and thawing cycles, wind, snow accumulation, and sun exposure.  The height of the tumulus is now reduced from its estimated original 60 m due to weathering, previous uncontrolled research investigations and climbing by visitors. Furthermore, the Nemrut property is located within a first degree earthquake zone and is very close to the East Anatolian Fault, which is seismically active. Therefore, the tumulus, statues and stelae are vulnerable to earthquakes.

Nemrut Dağ retains its authenticity in terms of form, materials and design as one of the unique artistic achievements of the Hellenistic period with its fascinating beauty of monumental sculptures in a spectacular setting. It has survived  in a moderately well-preserved state. The original ceremonial routes to the Hierotheseion are known and still used for access today.

Cultural components of the site are protected under the National Conservation Law No. 2863 and National Parks Law No. 2873. Mount Nemrut Tumulus was registered as a First Degree Archaeological Site under Act No. 2863 in 1986. After the preparation of current detailed maps, this site was revised and its surroundings were designated as an Interaction Transition Zone by Şanlıurfa Regional Council for Conservation of Cultural Property in 2008. Finally, the border of this zone, which acts as an unofficial Buffer Zone, was enlarged in 2011 by the same authority for the sake of the conservation of the cultural asset. Under the National Parks Law (No. 2873), an area that includes Nemrut Tumulus and other archaeological areas covering 13.850 ha were declared a Natural Park in 1988. With respect to this, the 1:25000 scaled “Long Term Development Plan of Mount Nemrut National Park” was approved in 2002 and reviewed in 2009 and 2011. Within the framework of the Commagene Nemrut Conservation Development Programme (CNCDP), launched in August 2006 with a protocol signed between the Ministry of Culture and Tourism and the Middle East Technical University (METU), geological studies, material research and structural analyses have been carried out to identify material properties of blocks, examine the deterioration mechanisms of the stones, investigate compatible mortars and determine appropriate structural interventions. The structure has been documented in detail and a reconstitution study, to be used to understand the original design considerations and all the previous interventions, has been completed.

Drawing upon data from the detailed research of the construction materials and the structural analyses made in the area, a restoration project has been prepared and includes the consolidation of the stones, the definition of structural interventions and preventive measures to control possible risks and limited aesthetic applications to the eroded blocks, which will permit a better perception of the original design considerations of the Hierotheseion. Measured drawings, restitution and restoration projects were approved by the Regional Council in 2011. The Commagene Nemrut Management Plan requires completion and implementation.

In 2009 projects were prepared for two visitor centres outside the property, one on the way to Adıyaman and the other on the way to Malatya.