Situated at a strategic point along the Silk Route, at the crossroads of trade as well as religious, cultural and intellectual influences, the 492 cells and cave sanctuaries in Mogao are famous for their statues and wall paintings, spanning 1,000 years of Buddhist art. 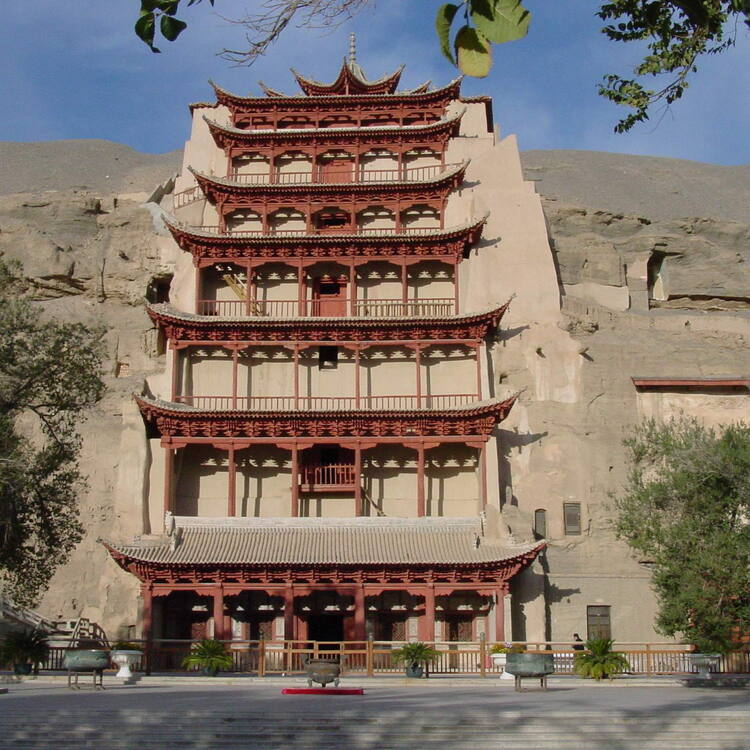 Carved into the cliffs above the Dachuan River, the Mogao Caves south-east of the Dunhuang oasis, Gansu Province, comprise the largest, most richly endowed, and longest used treasure house of Buddhist art in the world. It was first constructed in 366AD and represents the great achievement of Buddhist art from the 4th to the 14th century. 492 caves are presently preserved, housing about 45,000 square meters of murals and more than 2,000 painted sculptures. Cave 302 of the Sui dynasty contains one of the oldest and most vivid scenes of cultural exchanges along the Silk Road, depicting a camel pulling a cart typical of trade missions of that period. Caves 23 and 156 of the Tang dynasty show workers in the fields and a line of warriors respectively and in the Song dynasty Cave 61, the celebrated landscape of Mount Wutai is an early example of artistic Chinese cartography, where nothing has been left out – mountains, rivers, cities, temples, roads and caravans are all depicted.

As evidence of the evolution of Buddhist art in the northwest region of China, the Mogao Caves are of unmatched historical value. These works provide an abundance of vivid materials depicting various aspects of medieval politics, economics, culture, arts, religion, ethnic relations, and daily dress in western China. The unique artistic style of Dunhuang art is not only the amalgamation of Han Chinese artistic tradition and styles assimilated from ancient Indian and Gandharan customs, but also an integration of the arts of the Turks, ancient Tibetans and other Chinese ethnic minorities. Many of these masterpieces are creations of an unparalleled aesthetic talent.

The discovery of the Library Cave at the Mogao Caves in 1990, together with the tens of thousands of manuscripts and relics it contained, has been acclaimed as the world’s greatest discovery of ancient Oriental culture. This significant heritage provides invaluable reference for studying the complex history of ancient China and Central Asia.

Criteria (i): The group of caves at Mogao represents a unique artistic achievement both by the organization of space into 492 caves built on five levels and by the production of more than 2,000 painted sculptures, and approximately 45,000 square meters of murals, among which are many masterpieces of Chinese art.

Criteria (ii): For 1,000 years, from the period of the Northern Wei Dynasty (386-534) to the Mongol-led Yuan Dynasty (1276-1386), the caves of Mogao played a decisive role in artistic exchanges between China, Central Asia and India.

Criteria (iii): The paintings at Mogao bear exceptional witness to the civilizations of ancient China during the Sui, Tang and Song dynasties.

Criteria (v): Occupied by Buddhist monks from the end of the 19th century up to 1930, the rock art ensemble at Mogao, administered by the Dunhuang Cultural Relics Research Institute, preserves the example of a traditional monastic settlement.

Criteria (vi): The caves are strongly linked to the history of transcontinental relations and of the spread of Buddhism throughout Asia. For centuries the Dunhuang oasis, near which the two branches of the Silk Road forked, enjoyed the privilege of being a relay station where not only merchandise was traded, but ideas as well, exemplified  by the Chinese, Tibetan, Sogdian, Khotan, Uighur and even Hebrew manuscripts found within the caves.

Mogao Caves encompass caves, wall paintings, painted sculptures, ancient architecture, movable cultural relics and their settings. The property area and buffer zone contain all the attributes that demonstrating the values of the Mogao Caves and thus ensure the integrity of both the heritage site and its environment. Documents of Western Xia, Central Asian and Phags-pa scripts had been discovered through archaeological investigations in the 243 caves in the northern area of Mogao Caves, which was the area for monks to live and meditate and also served as the graveyard in the past. The Mogao Caves comprise the Northern Area and Southern Area caves together.

The location of the Mogao Caves and its settings are faithful to the authentic historical context in which they were created. The design, materials, traditions, techniques, spirit, and impression of the caves, wall paintings, painted sculptures and movable cultural relics still exhibit the characteristics of the periods in which they were created. The continued utilization of the Mogao Caves for tourism has indeed promoted its historic significance. Conservation plans have established the guidelines for the caves’ utilization and conservation and therefore will ensure the authenticity of the site and its settings.

The Mogao Caves were inscribed on the World Heritage List in 1987. As a State Party, China has put all World Heritage sites under top-level protection. In 1961, the Mogao Caves was listed as one of the State Priority Protected Sites by the State Council and was put under the protection of national laws including the Law of the People's Republic of China on the Protection of Cultural Relics. The Regulations for the Conservation of the Mogao Caves in Dunhuang, Gansu Province (2002) has confirmed the boundaries of the conservation area, and the Master Plan for the Conservation of the Mogao Caves at Dunhuang (2006-2025), which has been reported to the Gansu Provincial Government and will be issued soon, adds the area for the control of construction, which overlaps with the buffer zone. The two directives are the most important measures taken for preserving the authenticity and integrity of the Mogao Caves. The Administrative Institution of the Mogao Caves has been cooperating with international counterparts to study conservation and site management and looks forward to continuing its work in preserving the heritage of the site.

The goal in the future is to implement the measures set out in the management plan by the scheduled time, to learn from advanced experiences in heritage site conservation and management at home and abroad, to ensure the authenticity and integrity of the heritage site and its setting, and to make its full historical information and value available to future generations.