The sacred Mount Tai ('shan' means 'mountain') was the object of an imperial cult for nearly 2,000 years, and the artistic masterpieces found there are in perfect harmony with the natural landscape. It has always been a source of inspiration for Chinese artists and scholars and symbolizes ancient Chinese civilizations and beliefs. 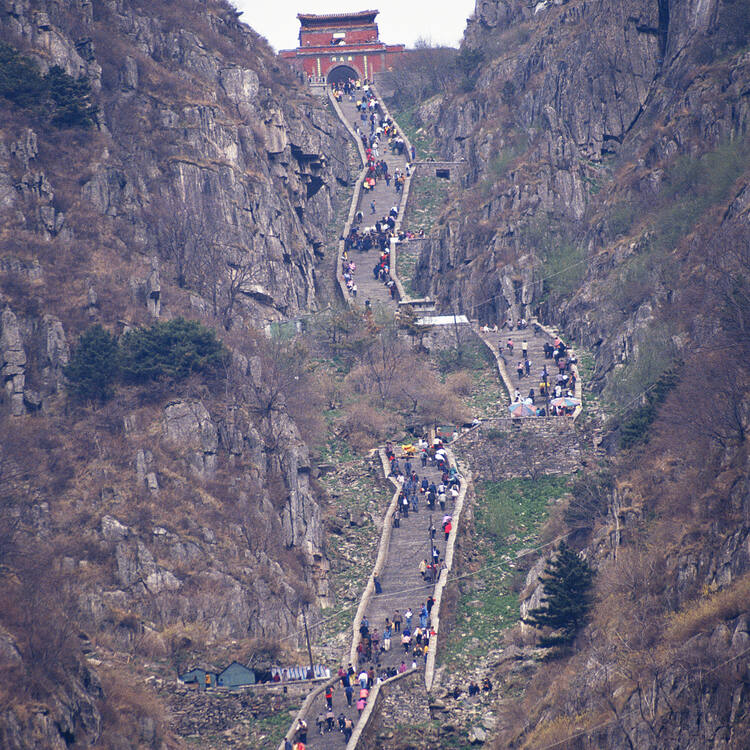 Mount Taishan is the most famous sacred mountain of China, with exceptional historic, cultural, aesthetic and scientific value.  Settled by humans as early as the Neolithic (a Dawenkou site is nearby), the mountain has been worshipped continuously throughout the last three millennia.  A large and impressive rock mass covering 25,000 ha and rising to 1,545 m above the surrounding plateau, Mount Taishan is considered one of the most beautiful scenic spots in China and was an important cradle of oriental East Asian culture since the earliest times. The mountain was an important object of the cult worship of mountains even before 219 BCE, when the Qin Emperor, Huang Di, paid tribute to the mountain in the Fengshan sacrifices to inform the gods of his success in unifying all of China. On the mountain there are 12 historically recorded imperial ceremonies in homage to Heaven and Earth, about 1,800 stone tablets and inscriptions, and 22 temples, which together make Mount Taishan the most important monument in China, a world-renowned treasure house of history and culture.

The key monument, the Temple to the God of Taishan, contains the Taoist masterpiece painting of 1,009 CE “The God of Taishan Making a Journey”. Inscriptions include the Han Dynasty stelae of Zhang Qian, Heng Fang and Madam Jin Sun; the Valley of Inscribed Buddhist Scriptures inscribed in the Northern Qi Dynasty; the Eulogium on Taishan by Tang Xuanzong, and the Parallel Stelae of the Tang Dynasty. There is also a number of ancient and significant trees, including six cypresses of the Han Dynasty planted 2,100 years ago; Sophora japonica of the Tang Dynasty planted 1,300 years ago, and the Guest-Greeting Pine and the Five-Bureaucrat Pine, both of which were planted some 500 years ago.  All the architectural elements, paintings, in situ sculptures, stone inscriptions and ancient trees are integrated into the landscape of Mount Taishan.

Criterion (i): The landscape of Mount Taishan as one of the five sacred mountains in traditional China is a unique artistic achievement. The eleven gates, the fourteen archways, the fourteen kiosks and the four pavilions, which are scattered along the flight of 6,660 steps that rise between heaven and earth are not just simple architectural achievements, but are the final touches by human hands to the elements of a splendid natural site. Its very size places this scenic landscape, which has evolved over a period of 2,000 years, among the most grandiose human achievements of all time.

Criterion (ii): Mount Taishan, the most venerated of mountains in China, exerted for 2,000 years multiple and wide-ranging influence on the development of art.  The Temple to the God of Taishan and the Azure Cloud Temple, dedicated to his daughter, the Goddess Laomu, were prototypes built on Mount Taishan and subsequently used as models during the imperial period, throughout all of China. The conceptual model of a mountain bearing the traces of man, where graceful structures – bridges, gateways or pavilions – contrast with sombre pine forests or frightening rocky cliffs, could only have originated by referring to Mount Taishan.

Criterion (iii): Mount Taishan bears unique testimony to the lost civilizations of imperial China, most particularly in relation to their religions, arts and letters.  For 2,000 years it was one of the principal places of worship where the emperor paid homage to Heaven and Earth in the Fengshan sacrifices, conducted by the Son of Heaven himself.  Since the time of the Han Dynasty, it has been one of the five mountains symbolizing the Celestial Kingdom, in accordance with the Doctrine of the Five Elements, a fundamental premise in Chinese thought.

Criterion (iv): Mount Taishan is an outstanding example of a sacred mountain. The Palace of Heavenly Blessings (1,008 CE), located inside the Temple to the God of Taishan, is one of the three oldest palaces in China.  The Azure Cloud Temple, also constructed under the Song Dynasty, is typical of a mountain architectural complex in the arrangement of its courtyards and buildings,  and the Divine Rock Temple with its Thousand Buddhas Hall are  outstanding and complete examples of great temples. Together they illustrate the cultural and religious aspects of the Tang and Song periods.

Criterion (v): The natural and cultural ensemble of Mount Taishan comprises a traditional human settlement in the form of a cult centre dating from the Neolithic (Dawenkou) period, which has become an outstanding example of traditional culture under the impact of irreversible change wrought by increasing visitation and tourism.

Criterion (vi): Mount Taishan is directly and tangibly associated with events whose importance in universal history cannot be minimized. These include the emergence of Confucianism, the unification of China, and the appearance of writing and literature in China.

Criterion (vii): With nearly 3 billion years of natural evolution, Mount Taishan was formed through complicated geological and biological processes, which resulted in a gigantic rock mass covered with dense vegetation towering over the surrounding plateau. This dramatic and majestic mountain is an outstanding combination of a beautiful natural landscape dominated by the cultural impacts of thousands of years of human use.

Due to its long-standing status as a sacred place, Mount Taishan has been preserved with little alteration. The ensemble of elements enables Mount Taishan to entirely and accurately represent its harmonious combination as a natural landscape modified and enhanced by human agency to become the embodiment of ancient Chinese belief and culture.

A cable car was built before the property was inscribed as World Heritage but most visitors reach the summit area by climbing the 6,660 steps. The integrity of the property has been impacted little by tourism and associated facilities, however there needs to be a definite limit of the extent of development of such facilities. There are substantial and impressive areas free of both historic and modern features such as the very impressive Rear Rocky Basin. Much of the mountain has a grandeur and wilderness that belies its thousands of years of human use.

The elements of the cultural heritage of Mount Taishan meet all requirements of authenticity: form and design, materials and substance, use and function, traditions and techniques, location and setting, spirit and feeling. The humanistic and ecological environment of Taishan has been well preserved through all the dynasties. The age-old geological relics, ancient architectural ensembles, stone tablets and inscriptions, and ancient and rare trees all have been carefully protected and maintained.

Mount Taishan has been protected and managed for over 3,000 years. The present administrative organization is the Management Committee of Scenic Spots and Historic Sites of Taishan, Taian City, and comprises representatives of the National World Heritage Office, the Bureau of Cultural Relics and Religions, the Bureau of Hygiene and Environmental Protection, and other functional departments and administrative units. Financial resources for the maintenance and protection of Taishan are allocated from the government and supplemented by entrance fees to scenic areas.

In 1982, Taishan was designated as the National Top Scenic Spot by the State Council of the People’s Republic of China. According to the law on the Protection of World Cultural and Natural Heritage and other relevant laws and regulations of the People’s Republic of China, a document laying out the Overall Planning of Protection of Taishan was adopted in October 2000 by the Standing Committee of the National People’s Congress of Shandong Province, which provides a legal basis of effective operations for the integrated management of protection of Mount Taishan.  In 2004, the government of Taian City gazetted the World Heritage property area for highest-level protection within which any construction project must be approved by relevant administrative departments according to established laws and procedures.

Management and protection issues included the concept of adopting a carrying capacity and designing facilities to be used to control access, and to consider proposals to progressively remove or replace incongruous buildings with those of an appropriate architectural style. The location, number and type of small scale photo and refreshment operations also need to be rationalised and controlled to reduce adverse impact on visitor appreciation of natural and cultural values. Finally, a proper resource inventory of the natural features of the site is needed in order to better document the full value of the park. The specific long-term management objective for the property is to control business and tourist activities within the protection zone in order to safeguard both integrity and authenticity of the property.

Dossier: 437
Spanning the cities of Tai’an and Jinan in central Shandong Province with the main peak in the city of Tai’an
N36 16 0.012 E117 5 60
Web Browser not supported for ESRI ArcGIS API version 4.10. WebGL must be enable, see documentation