Blenheim Palace, near Oxford, stands in a romantic park created by the famous landscape gardener 'Capability' Brown. It was presented by the English nation to John Churchill, first Duke of Marlborough, in recognition of his victory in 1704 over French and Bavarian troops. Built between 1705 and 1722 and characterized by an eclectic style and a return to national roots, it is a perfect example of an 18th-century princely dwelling. 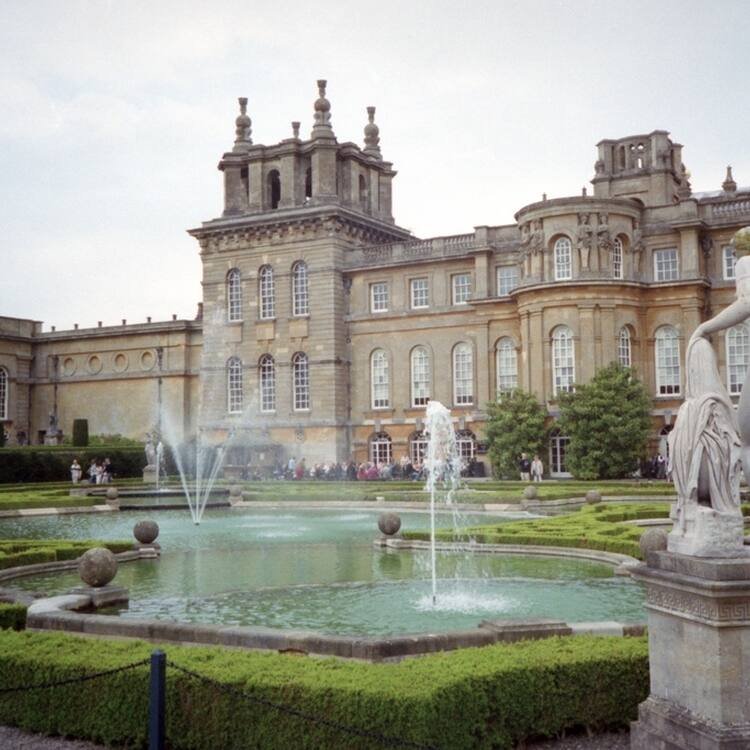 Blenheim Palace, in Oxfordshire, was designed by John Vanbrugh. The English nation presented the site to John Churchill, first Duke of Marlborough, in recognition of his victory in 1704 over French and Bavarian troops, a victory which decided the future of the Empire and, in doing so, made him a figure of international importance. The Palace sits within a large walled landscape park, the structure by Vanbrugh overlaid by the designs of Lancelot “Capability” Brown from 1761 onwards.

The design and building of the Palace between 1705 and 1722 represented the beginning of a new style of architecture and its landscaped Park, designed by Lancelot “Capability” Brown, is considered “a naturalistic Versailles”.

In tangible form, Blenheim is an outstanding example of the work of John Vanbrugh and Nicholas Hawksmoor, two of England’s most notable architects. It represents a unique architectural achievement celebrating the triumph of the English armies over the French, and the Palace and its associated Park have exerted great influence on the English Romantic movement which was characterised by the eclecticism of its inspiration, its return to natural sources and its love of nature.

The original landscape set out by John Vanbrugh, who regulated the course of the River Glyme, was later modified by Lancelot “Capability” Brown who created two lakes, seen as one of the greatest examples of naturalistic landscape design.

Blenheim Palace was built by the nation to honour one of its heroes John Churchill, the first Duke of Marlborough, and is also closely associated with Sir Winston Churchill.

Criterion (ii): By their refusal of the French models of classicism, the Palace and Park illustrate the beginnings of the English Romantic movement, which was characterised by the eclecticism of its inspiration, its return to national sources and its love of nature. The influence of Blenheim on the architecture and organisation of space in the 18th and 19th centuries was greatly felt both in England and abroad.

Criterion (iv): Built by the nation to honour one of its heroes, Blenheim is, above all, the home of an English aristocrat, the 1st Duke of Marlborough, who was also Prince of the Germanic Holy Roman Empire, as we are reminded in the decoration of the Great Drawing Room [the Saloon] by Louis Laguerre (1719-20).

Like the World Heritage properties Residence of Würzburg and the Castles of Augustusburg and Falkenlust in Brühl, Blenheim is typical of 18th century European princely residences.

The property is enclosed by an 18th century dry stone wall which defines its extent and maintains its physical integrity. Within the wall, the layout of the principal buildings remains unaltered since their construction, and the overall structure of the landscaped park layout remains largely as set out by Vanbrugh and Brown. The buildings and Park were laid out over an earlier Roman and medieval landscape, remnants of which are still visible through the Vanbrugh and Brown landscapes. Changes to the landscape and buildings by their owners have continued to the present day though these have not detracted from the Outstanding Universal Value of the property.

The Park contains important veteran trees. Disease and time have caused some loss of original tree specimens but these have been replanted with the same species where possible and appropriate. Because of climate change and the greater incidence of drought, adjustments have to be made to the mix of species used in conserving the park landscape.

The integrity of the property is well protected by its enclosing wall but important visual links do exist between the gates, the parkland buildings, buildings in the surrounding villages and landscape, and care needs to be taken to ensure these key visual links are protected.

The overall relationship between the Baroque Palace and its Park is still clearly in place and the Outstanding Universal Value of the property can be very readily understood despite the early 20th century changes to the landscape. The form and design of the Palace and Park survive well and there is a high degree of survival of fabric and indeed original fittings and furnishings.

Government guidance on protecting the Historic Environment and World Heritage is set out in the National Planning Policy Framework and Circular 07/09. Policies to protect, promote, conserve and enhance World Heritage properties, their settings and buffer zones are also found in statutory planning documents. World Heritage status is a key material consideration when planning applications are considered by the Local Authority planning authority. The West Oxfordshire Local Plan contains policies to protect the property.

The property as a whole is designated as a Grade 1 registered Park and Garden and was given National Heritage tax exemption status in 1999 in recognition of its important architecture, its outstanding scenic, historic landscape, and the outstanding importance of the buildings’ contents and their intimate association with the property. Forty five key buildings on the site are Grade 1 and Grade 2* Listed Buildings, with the park wall designated Grade 2. There are 5 scheduled ancient monuments within the Park.

The lakes and High Park are designated as Sites of Special Scientific Interest (SSSI) and the ancient woodland and hedgerows are both protected. Part of the setting of the property is within the Conservation Areas of Woodstock and Bladon and part is in the Cotswold’s Area of Outstanding Natural Beauty.

A Management Plan has been in place since 2006 and is monitored on an annual basis by a Steering Group which includes representatives from English Heritage, ICOMOS-UK, DCMS, Natural England, the County Council and the local planning authority. Relevant Management Plan policies carry weight in the planning system. There is a comprehensive and successful visitor management plan. The Steering Group is coordinated by the Blenheim Palace and Estate Chief Executive who has responsibility for implementing the Management Plan Action Plan. There is an ongoing programme of repair and regular maintenance of the buildings and structures. Recent work has included the strengthening and reinstatement of the Blenheim Dam during 2009 to comply with safety legislation.

The Park is open through the year and the Palace and Formal Gardens are open from mid-February to mid-December each year. The property has a long tradition of public access (going back to at least Easter 1950) and it provides the setting for informal recreation as well as a series of activities including sporting events, craft and country fairs and entertainment events such as music concerts and historical re-enactments. The property also offers a very high quality resource for a variety of educational uses.

Firm implementation of existing policies is important to provide effective protection of the setting of the World Heritage property and it will be important to ensure that the management of the Park prioritises conservation of the elements of the landscape that reflect the work of Vanbrugh and Brown. The Steering Group meets annually to monitor progress and implementation with regard to the 33 stated objectives in the Management Plan and to check awareness with regard to risk preparedness and to monitor any issues regarding the integrity of the property – particularly with regard to the continuous monitoring of the key visual links.