The List Historic Centre of Oaxaca and Archaeological ...
Print

Historic Centre of Oaxaca and Archaeological Site of Monte Albán

Historic Centre of Oaxaca and Archaeological Site of Monte Albán

Inhabited over a period of 1,500 years by a succession of peoples – Olmecs, Zapotecs and Mixtecs – the terraces, dams, canals, pyramids and artificial mounds of Monte Albán were literally carved out of the mountain and are the symbols of a sacred topography. The nearby city of Oaxaca, which is built on a grid pattern, is a good example of Spanish colonial town planning. The solidity and volume of the city's buildings show that they were adapted to the earthquake-prone region in which these architectural gems were constructed. 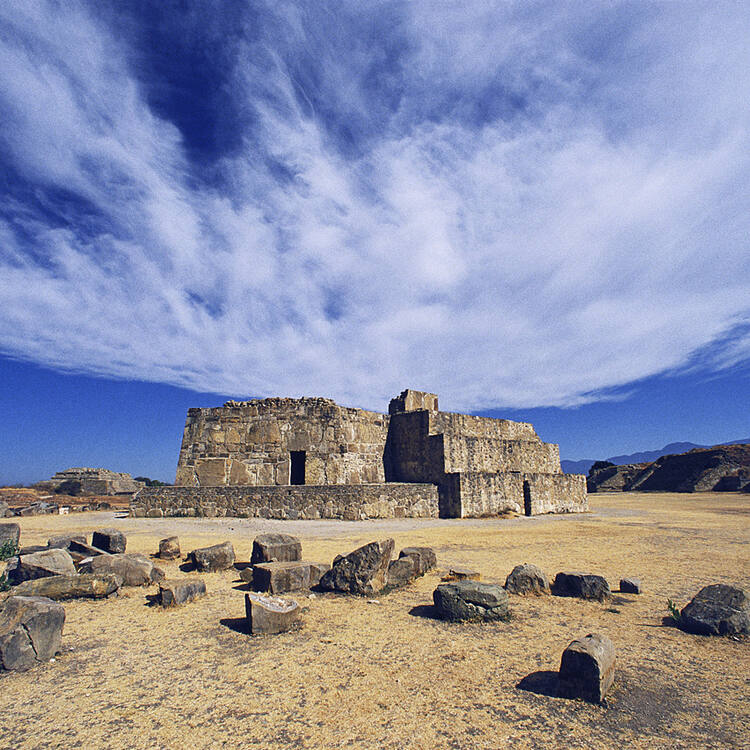 The World Heritage property, located in the in the region known as central valleys of Oaxaca in the depression formed between the Sierra Madre Oriental and the Sierra Madre del Sur, is composed of two distinct cultural sites: the historic centre of Oaxaca de Juarez and the archaeological site of Monte Albán.

The city of Oaxaca de Juarez, initially named Antequera, was founded in 1529 in a small valley occupied by a group of Zapotec Indians. It is an example of sixteenth XVI century colonial city and of town planning given that it retains its trace in the form of checkerboard with square blocks and portals on all four sides of the square. To trace the Villa de Antequera, Alonso García Bravo chose a point midway between the rivers Jalatlaco, Atoyac and the Cerro del Fortin. The trace was initiated from a central plaza basis of two axes, east-west and north-south, with a slight tilt to compensate for the lighting and sunlight due to its latitude.

The centre of the city remains the centre of economic, political, social, religious and cultural activities that give dynamism to the city. It retains its iconic architecture and the buildings representative of a cultural tradition of more than four centuries of art and history. A total of 1,200 historic monuments has been inventoried and listed. The major religious monuments, the superb patrician town houses and whole streets lined with other dwellings combine to create a harmonious cityscape, and reconstitute the image of a former colonial city whose monumental aspect has been kept intact. Fine architectural quality also characterizes the 19th-century buildings in this city that was the birthplace of Benito Juarez and which, in 1872, adopted the name of Oaxaca de Juarez. Being located in a highly seismic zone, the architecture of the city of Oaxaca is characterized by thick walls and low buildings. The mestizo population keeps alive both traditions and ancestral customs.

Monte Alban is the most important archaeological site of the Valley of Oaxaca. Inhabited over a period of 1,500 years by a succession of peoples – Olmecs, Zapotecs and Mixtecs – the terraces, dams, canals, pyramids and artificial mounds of Monte Albán were literally carved out of the mountain and are the symbols of a sacred topography. The grand Zapotec capital flourished for thirteen centuries, from the year 500 B.C to 850 A.D. when, for reasons that have not been established, its eventual abandonment began. The archaeological site is known for its unique dimensions which exhibit the basic chronology and artistic style of the region and for the remains of magnificent temples, ball court, tombs and bas-reliefs with hieroglyphic inscriptions. The main part of the ceremonial centre which forms a 300 m esplanade running north-south with a platform at either end was constructed during the Monte Albán II (c. 300 BC-AD 100) and the Monte Albán III phases. Phase II corresponds to the urbanization of the site and the domination of the environment by the construction of terraces on the sides of the hills, and the development of a system of dams and conduits. The final phases of Monte Albán IV and V were marked by the transformation of the sacred city into a fortified town. Monte Albán represents a civilization of knowledge, traditions and artistic expressions. Excellent planning is evidenced in the position of the line buildings erected north to south, harmonized with both empty spaces and volumes. It showcases the remarkable architectural design of the site in both Mesoamerica and worldwide urbanism.

Criterion (i) Oaxaca was the first town laid out in the New Spain during the XVI century with square blocks of 100 yards per side and planned from a central square. The icons of economic, political and religious powers were built around this central place, giving the city dynamism and contributing to universal urbanism. The grid layout of the city of Oaxaca is a unique example of urban planning in New Spain in the XVI century. The ceremonial centre of Monte Alban has created a grandiose architectural landscape which represents one of a kind artistic achievement.

Criterion (ii) For more than a millennium, Monte Alban exerted considerable influence in the entire cultural area of Oaxaca. Latter-day Oaxaca is a perfect example of a 16th-century colonial town. The trace of grid layout of the city of Oaxaca was adopted in several other colonial towns.

Criterion (iii) Monte Albán is an outstanding example of a pre-Columbian ceremonial centre in the middle zone of present-day Mexico, which was subjected to influences from the north - first from Teotihuacan, later the Aztecs - and from the south, the Maya. With its ball game court, magnificent temples, tombs and bas-reliefs with hieroglyphic inscriptions, Monte Albán bears unique testimony to the successive civilizations occupying the region during the pre-Classic and Classic periods.

Criterion (iv) Among some 200 pre-Hispanic archaeological sites inventoried in the valley of Oaxaca, the Monte Alban complex best represents the singular evolution of a region inhabited by a succession of peoples: the Olmecs, Zapotecs and Mixtecs. The City of Oaxaca, with its design as a check board and its iconic architecture, has developed over more than four centuries as evidence of the fusion of two cultures Indian and Spanish.

The inscribed property encompasses an area of 375 ha, with a buffer zone of 121 ha. All elements to convey the Outstanding Universal Value of the property are within its boundaries.

The Historic Centre of Oaxaca comprises an area of 5.00 square kilometres, 247 blocks and 1200 listed monuments of civil and religious architecture and ancient customs and traditions that developed over more than four centuries that are preserved nowadays, despite the earthquakes that have been documented on several occasions and have affected its architecture.

The archaeological site of Monte Alban has been well preserved and conservation and management actions have centred on maintaining its physical integrity.

Despite the growth of the city towards the four cardinal points and the earthquakes that have affected the structures, the form and design and use and function of several iconic buildings has been maintained in the Historic Centre. In Monte Alban, the location and setting has been largely preserved, as well as the form and design of the ceremonial centre.

Conservation and restoration practices will need to be controlled in both component parts so that the conditions of authenticity continue to be met.

On March 15, 1976, the Federal Government published in the Official Journal of the Federation, the decree of Historic Monuments Zone of the City of Oaxaca, subject to the conditions set by the Federal Law on Monuments and Archaeological Areas and Historic Art. The enforcement of these legal provisions corresponds to the National Institute of Anthropology and History.

In order to coordinate actions for the benefit of preserving the Historic Centre, on December 16, 1993, an agreement that provides for the creation of the “Public service office” was signed between the National Institute of Anthropology and History and the municipality of the city of Oaxaca. This joint effort allows the INAH and the municipality, within their authorized powers, to control architectural projects and proposed development in the Historic Centre.

As a result of the collaboration between INAH and the municipality of the city of Oaxaca, on December 23, 1997 the Oaxaca State Government published in the Official Journal the Partial Plan for the Conservation of Historic Centre of Oaxaca City which stipulate the land uses and purposes; the classification of buildings according to their importance; and the standards that should be the subject of all interventions in the Historic Centre. To control the urban growth in the interior of the protection polygon, links with different Federal, State and Municipal government departments have been established for the regulation of land use, so that within their sphere of competence the destruction of the area of monuments by irregular settlements can be avoided.

The Monte Alban management Plan puts special emphasis on works of social management around the legally protected area in order to defend, along with the communities, the archaeological heritage from development. The management system in place also includes provisions for the archaeological investigation, conservation and maintenance of the site. 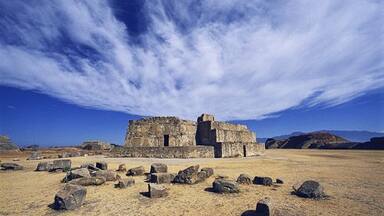 play_arrow Historic Centre of Oaxaca and Archaeological Site of ... (UNESCO/NHK)