The pan-Hellenic sanctuary of Delphi, where the oracle of Apollo spoke, was the site of the omphalos, the 'navel of the world'. Blending harmoniously with the superb landscape and charged with sacred meaning, Delphi in the 6th century B.C. was indeed the religious centre and symbol of unity of the ancient Greek world. 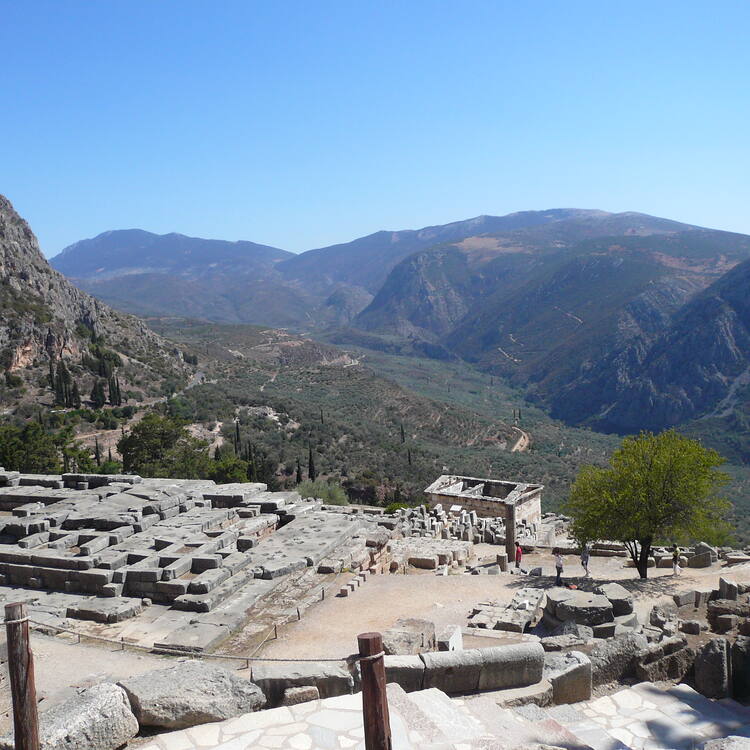 Delphi lies between two towering rocks of Mt. Parnassus, known as the Phaidriades (Shining) Rocks, in the Regional unit of Phocis in Central Greece. Here lies the Pan-Hellenic sanctuary of Apollo, the Olympian god of light, knowledge and harmony. The area was inhabited in the 2nd millennium BC, as is evident from Mycenaean remains (1500-1100 BC). The development of the sanctuary and oracle began in the 8th century BC, and their religious and political influence over the whole of Greece increased in the 6th century BC. At the same time, their fame and prestige spread throughout the whole of the then known world, from which pilgrims came to the site to receive an oracle from the Pythia, the priestess of Apollo. A place with a rich intangible heritage, Delphi was the centre of the world (omphalos) in the eyes of the ancient Greeks: according to myth, it was the meeting point of two eagles released by Zeus, one to the East and one in the West. The magnificent monumental complex is a human-made environment in perfect harmony with the rare natural environment, the principal features of which gave rise to the organisation of the cults. This harmonious relationship, which has remained undisturbed from ancient times to the present day, makes Delphi a unique monument and a priceless legacy bequeathed by the ancient Greek world to following generations.

Criterion (i): The layout of Delphi is a unique artistic achievement. Mt. Parnassus is a veritable masterpiece and is where a series of monuments were built whose modular elements – terraces, temples, treasuries, etc. – combine to form a strong expression of the physical and moral values of a site which may be described as magical.

Criterion (ii): Delphi had an immense impact throughout the ancient world, as can be ascertained by the various offerings of kings, dynasts, city-states and historical figures, who deemed that sending a valuable gift to the sanctuary, would ensure the favour of the god. The Sanctuary at Delphi, the object of great generosity and the crossroads of a wide variety of influences, was in turn imitated throughout the ancient world. Its influence extended as far as Bactria, following the conquest of Asia by Alexander the Great. Even pillaging of the Sanctuary by the emperor Nero and by Constantine the Great, who transported spoils from it to Rome and Constantinople, added to the artistic influence of Delphi.

Criterion (iii): Delphi bears a unique testimony to the religion and civilization of ancient Greece. At the legendary site where Apollo slew the serpent Python, celestial cults replaced chthonian cults and introduced the old heritage of myths originating from primitive times. The Delphic oracle, over which four sacred wars were fought, is one of the focal points of Greek political history, while the Theatre and the Stadium, where the Pythian Games took place every four years, were places of community celebrations reflecting triumphant Hellenism.

Criterion (iv): Delphi, situated in a magnificent natural setting which is still intact, is an outstanding architectural ensemble and an example of a great Pan-Hellenic sanctuary.

Criterion (vi): According to the ancients, the Temple of Apollo was where the Omphalos was located, that is, the navel of the universe, the centre of the earth. Delphi is consequently directly and tangibly associated with a belief of manifest universal significance.

The World Heritage property contains within its boundaries all the key attributes that convey the Outstanding Universal Value of the property. The place has not been altered through the centuries. The restoration projects that have been undertaken were of limited and small scale and they were carried out in accordance with the principles of the Charter of Venice. Within the property, only the archaeological museum has been built, which is indispensable for the protection of the findings and for the adequate understanding of the sanctuary and its offerings. The broader area of Delphi, being a transformogenic geophysical area, in the periphery of the great tectonic fault of Central Greece, has been faced with the same problems since the ancient times: earthquakes and land slides, erosion of soils and sedimentations, along with periodic vegetation growth and the ensuing fire risk.

The monuments of the site meet the criteria of authenticity, since they have undergone mild interventions with absolute respect to material, form and design. These consist of relocating ancient architectural material in its original place or of restoring the monuments by using mainly authentic material, in order to obtain their original plan. Furthermore, ancient building material was used for the restoration of certain monuments and offerings of the site. The site still preserves the authenticity of the landscape. Modern visitors arriving along the Holy Road from the Roman Market up to the Stadium can perceive the same feeling as the person who visited the area in the antiquity.

The Archaeological Site of Delphi is protected under the provisions of Law No. 3028/2002 on the “Protection of Antiquities and Cultural Heritage in general”. Under Ministerial Decrees 13624/728/1991, 1266/1991 and 35829/1801/2012, the Archaeological Site of Delphi is part of a most extended geographical area of landscape and monuments under protection. Building is prohibited in the area of the slopes of Mt. Parnassus and the olive-grove, while there is also a protection zone, covering an area, which extends in two Regional units (Boeotia and Phocis).

The property is under the jurisdiction of the Ministry of Culture, Education and Religious Affairs, through the Ephorate of Antiquities of Phocis, its competent Regional Service, which systematically supervises the area for any acts of illegal excavations, monitors and intervenes, when necessary, in cases where any antiquities are revealed during the course of digging works and performs control on excavation works for the foundation of new buildings as well as on their size and architectural design, when appropriate.

The Archaeological Site of Delphi is protected 24 hours per day. There is an adequate fire protection system, upgraded at intervals; several measures for the major issue of the falling rocks are taken, for the time being of temporary character, such as the two metal fences that have been constructed in the area. Towards a permanent solution of the issue, the Central Archaeological Council has approved the study for the fastening of the rock slopes themselves. Works for the upgrade of the archaeological site (improvement of visitors’ facilities, better access to visitors with disabilities, protection and restoration of the monuments themselves) are being carried out. Several information signs have already been and some others are planned to be installed, upgrading the substantial information for the visitors, as far as the archaeological site is concerned. Sustaining the Outstanding Universal Value of the property over time will require the accomplishment of all the works in progress that will lead to the better perception of the monuments by the visitors and the protection of the site, with the fastening of the rock slopes being a priority.