This ancient university town north-west of Madrid was first conquered by the Carthaginians in the 3rd century B.C. It then became a Roman settlement before being ruled by the Moors until the 11th century. The university, one of the oldest in Europe, reached its high point during Salamanca's golden age. The city's historic centre has important Romanesque, Gothic, Moorish, Renaissance and Baroque monuments. The Plaza Mayor, with its galleries and arcades, is particularly impressive. 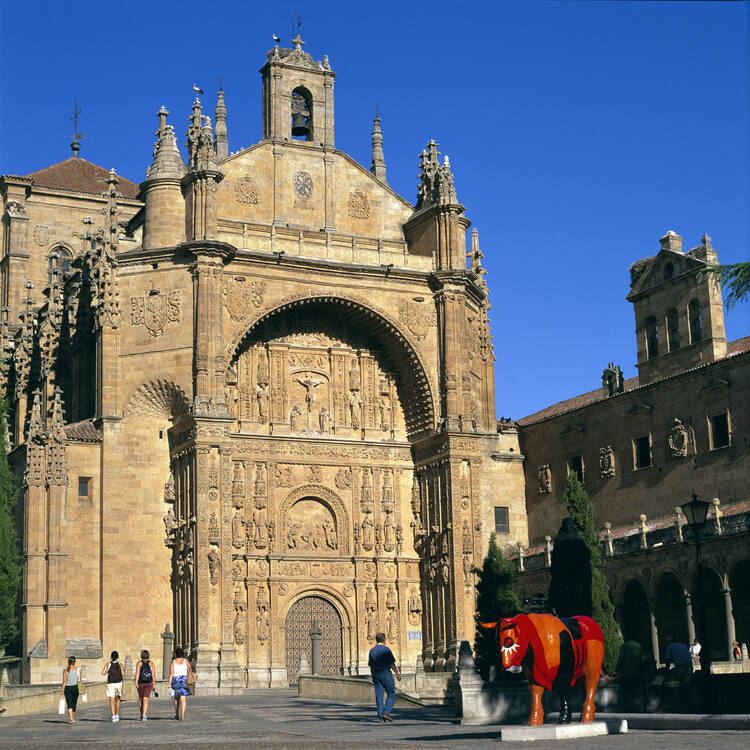 Salamanca is an ancient university town situated in the west of Spain in the Autonomous Community of Castilla and León. The Carthaginians first conquered the city in the 3rd century B.C. It then became a Roman settlement before being ruled by the Moors until the 11th century. The university, one of the oldest in Europe, reached its high point during Salamanca's Golden Age. The city's historic centre has important Romanesque, Gothic, Moorish, Renaissance, and Baroque monuments. The Plaza Mayor, with its galleries and arcades, is particularly impressive.

Beginning with the Roman Bridge that spans the River Tormes southwest of the city, numerous structures still testify to the two thousand year-old history of antique Salmantica. The remarkable examples include the Old Cathedral and San Marcos (12th century), the Salina and the Monterrey Palaces (16th century), and above all the Plaza Mayor (1729-1755). But the city owes its most essential features to the University. The remarkable group of buildings in Gothic, Renaissance, and Baroque styles, which, from the 15th to 18th centuries, rose to the institution that proclaimed itself “Mother of Virtues, Sciences, and the Arts” makes Salamanca an exceptional example of an old university town in the Christian world, such as Oxford and Cambridge.

The Cathedral School of Salamanca existed as far back as the late 12th century. The oldest university building in Salamanca, now the Rectorate, is the old Hospital del Estudio, built in 1413, with the final element of the building programme begun in 1533.

Salamanca provides one of the oldest examples of university facilities conceived as such rather than as colleges. However, the city also boasted many colleges, which were generally charitable institutions with close ties to the University.

Most of these buildings are located in the Old Quarter of the city. However, other monuments, located in the surroundings of the protected core area, are also part of the property. All are magnificent examples of religious architecture belonging to different styles: the Romanesque churches of San Marcos, San Juan de Barbalos, and San Cristóbal, the convents of Las Claras and Santa Teresa, the Gothic-Renaissance church of Sancti Spiritus, and the Colegio de los Irlandeses.

Criterion (i): The Plaza Mayor of Salamanca, built as a result of a solemn decision by King Philip V in 1710, is a unique artistic achievement in Baroque art, and considered by many the heart of the Golden City (La Dorada). Begun in 1729 according to plans drawn by Alberto de Churriguera, and finished in 1755 by Andrés García de Quiñones, and with contributions from Nicolás de Churriguera and José de Lara de Churriguera, it is one of the most important urban ensembles of 18th century Europe.

Criterion (ii): With the Plaza Mayor, the Clerecía (the Jesuit seminary), the college of Calatrava, the Colegio San Ambrosio, the churches of San Sebastián and Santa Cruz de Cañizares, the New Cathedral, and San Esteban, Salamanca is one of the essential art centres of the Churriguera family dynasty of architects, decorators and sculptors of Catalonia. The “churrigueresque” style exerted considerable influence in the 18th century not only in the Iberian Peninsula, but also in Latin America.

Criterion (iv): Although founded later than those of Bologna, Paris, and Oxford, the University of Salamanca had already established itself as one of the best academic institutions in Europe by 1250. It conserves an admirable architectural heritage that illustrates the diverse functions of a university institution in the Christian world. The Hospital del Estudio, the Escuelas Mayores, the Escuelas Menores, and the various colleges, which multiplied between the 15th and 18th centuries, form a group of exceptional coherence within a historic city also remarkable for its numerous civil and religious monuments.

The inscribed property covers an area of 51 ha, with a 130 ha buffer zone, and contains all the necessary attributes to express the property’s Outstanding Universal Value. These key features include all the monuments related to the University and also highly important examples of Baroque art in Spain, particularly the Plaza Mayor. The key attributes illustrate the history of Salamanca and bear witness to its primary function as a university town.

Their recognition as classified monuments has helped to preserve them properly and to retain material integrity, as any intervention is required to safeguard their characteristics. However, regulatory measures and provisions in planning tools will need to be strictly enforced to ensure that potential threats derived from new construction and developments are effectively addressed.

The Old City of Salamanca has retained key attributes of authenticity in terms of form, design, materials, and substance. Location and setting characteristics have also been maintained, as well as the use and function within the modern city.

As a place in continuous evolution, the Old City has also been affected by modifications such as urban infrastructure, and building renovation. Yet, these changes have been under strict administrative controls, both from the municipality and the regional government, in order to not adversely affect the Outstanding Universal Value of the property. Nevertheless, continuous attention must be placed on the property in order to ensure that future interventions do not compromise these key attributes.

The city of Salamanca was registered as “Historic Site” in 1951, the highest legal protection at the national level. The same legal regime, Property of Cultural Interest (BIC, Bien de Interés Cultural), is applied to most of the property’s component parts.

Urban planning is under the responsibility of the City of Salamanca and its General Plan sets the general regulations for the entire municipality, including the historic area.

As a result of the collaboration agreement between the Council of Culture and Tourism of the Junta de Castilla y León and the City Council, a Management Plan for the property, as well as a new Urban Plan for the historic city, will be formulated and implemented. Both planning tools will function as a roadmap to set all principles and regulations that public administrations must take on account, in order to adapt their policies to the conservation of the Outstanding Universal Value of the property, which must prevail over other considerations. All the existing and future sectorial plans concerning tourism, accessibility, urban planning, economic and social plans, etc. will be included in this Management Plan. To ensure that the conditions of authenticity and integrity continue to be met, it will be important to consider that all proposed new interventions for rehabilitation of development be subject to Heritage and Environmental Impact Assessments. These assessments will be crucial to ensure the protection of key attributes and their setting in the historic townscape.