The List Roman Monuments, Cathedral of St Peter and ...
Print

Trier, which stands on the Moselle River, was a Roman colony from the 1st century AD and then a great trading centre beginning in the next century. It became one of the capitals of the Tetrarchy at the end of the 3rd century, when it was known as the ‘second Rome’. The number and quality of the surviving monuments are an outstanding testimony to Roman civilization. 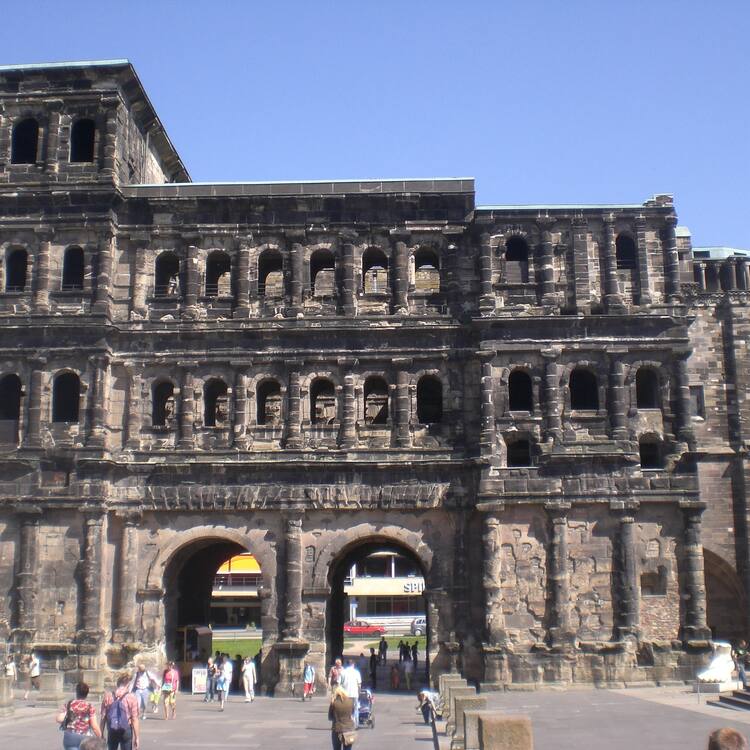 Roman Monuments, Cathedral of St Peter and Church of Our Lady in Trier (Germany) © Silvan Rehfeld

Trier, which is located on the Moselle river in the West of Germany, was a Roman colony from the 1st century A.D. and then a great trading centre in the beginning of the next century. It became one of the capitals of the Tetrarchy at the end of the 3rd century, when it was known as the 'second Rome'. The number and quality of the surviving monuments are an outstanding testimony to Roman civilization.

There is no place north of the Alps where so many important Roman buildings and such a concentration of traces of Roman settlement have been preserved as in Trier, the “Rome of the North”. In late classical times, Trier was one of the largest cities in the Roman Empire; it was the seat of the prefects of Gaul, Germania, Britannia and Hispania and after the imperial reforms of the Emperor Diocletian was the seat of the vice-emperor (Caesar) of the Western Empire.

While the structures built during the first and second centuries (the Moselle Bridge, the Barbara Baths, the Porta Nigra and the lgel Column) illustrate the richness of the commercial city, from which the garrison towns and fortresses on the Rhine were supplied, the monumental buildings from the reign of Constantine (Imperial Baths, Aula Palatina, Cathedral) are a visible expression of the immensity of imperial power and the claim to world domination made from the West of the Empire for the last time before the eclipse of the classical era (this claim was taken over in the East by the new capital of the Empire,  Constantinople, which thereby superseded Trier as well as Rome).

Of the buildings preserved from classical times, at least two of those described above are unparalleled. The Porta Nigra, with its state of preservation and its architectural layout (the combination of a fortification with the features of palace architecture) is a unique construction that is unlike any of the other preserved Roman city gates. Its development during the Middle Ages into a (likewise very unusual) double church also makes it a symbol of Western history. The monumental brick structure of the Basilica, with its lapidary form and the vast dimensions of its interior (the largest known interior from classical times) was the embodiment of the seat (sedes imperii) and the power of the Roman Empire.

One of the oldest church buildings in the Western world, the Cathedral has been a witness to the Christian faith since Constantine made Christianity a tolerated and supported religion in his Empire. Its architectural design unites elements of all the periods of classical, medieval and modern times, but has always been marked by the monumental concept that lies at its origins. The series of archbishops’ tombs covers with few interruptions the entire period from the 12th to the late 18th century. The Romanesque parclose, the renaissance pulpit and some of the Baroque marble altars belong to the major works of sculpture of their respective periods.

The Church of Our Lady is the earliest church built in French High Gothic style outside France. Its purity of style (it was completed in only 30 years) and the undeviating implementation of the architect’s plan for a basilica-shaped graduated central area, for which there were partial models, though no entire prototype, in France probably make it the most perfect example of the centralized construction concept in Gothic style.$

Criterion (i): The Porta Nigra, which is an enormous fortified gate built of large stones, flanked by two semi-circular four-storey towers,  is a unique achievement of 2nd century Roman architecture. The remains of the choir and the cloister of the two-level church built within its walls by Archbishop Poppo between 1034 and 1042 further enhance the monument.

Criterion (iii): Trier bears exceptional testimony to Roman civilisation due to the density and the quality of the monuments preserved: the bridge, the remains of the fortified wall, thermae, amphitheatre, storehouses etc. Funeral art, as demonstrated by the nomination of the Igel Column, and the craftsmanship of potters, glassworkers and minters flourished particularly.

Criterion (iv): Trier, along with Istanbul, is the example of a large Roman capital after the division of the Empire. The remains of the imperial palace, in addition to the Aula Palatina and the imperial thermae (the largest of the Roman Empire after those of Diocletian and Caracalla in Rome) are impressive in their enormity. Under the north basilica (now the Cathedral), the decoration of a painted ceiling, where members of the imperial family (most probably Helena and Fausta) appear to be identifiable, also bears testimony to the Aulic character of the architecture.

Criterion (vi): Trier is directly and tangibly associated with one of the major events of human history, Constantine's march against Maxence in 312, which was a prelude to the Edict of Milan (313) and which meant the recognition of Christianity.

The layout of the city still corresponds to its 2nd century configuration, with the major thoroughfares of the cardo (Simeonstrasse) and the decumanus (Kaiserstrasse). The components of the World Heritage property are partly well-preserved ruins (Barbara Baths, Imperial Baths, Amphitheatre), monuments that regained their Roman appearance in the 19th century by deletion of later additions (Porta Nigra) or reconstruction (Basilica) or incorporate Roman structures (Moselle Bridge, Cathedral). The Igel Column survived unaltered, the Church of Our Lady replaced the south church of the Constantine Cathedral complex in the 13th century. By their layout and dimension, all Roman buildings furnish evidence of importance of the former capital of the Western Empire to this day. All components are treasured main historic monuments.

The efforts concerning the protection and preservation of the Roman monuments in Trier started at the beginning of the 19th century; they are closely connected with the development of monument protection in Prussia. Hence, these monuments are not only authentic documents of the Roman period, but also significant examples of the history of monument preservation in Germany. In World War II, only the Basilica and the Church of Our Lady were damaged by fire and bombs; they were carefully restored between 1954-1956 and 1946-1949 respectively.

The laws and regulations of the Federal Republic of Germany and the State of Rhineland-Palatinate guarantee the consistent protection of the Roman Monuments, Cathedral of St Peter and Church of Our Lady in Trier. They are listed monuments according to the Rhineland-Palatinate Monument Protection Act. Once finalised and approved, a buffer zone will exist for the property.

Conservation and construction issues are dealt with and managed in close cooperation between the owners (Federal State of Rhineland-Palatinate, City of Trier, Diocese of Trier), the responsible conservation authorities and building administrations, the Ministry for Science and Culture and the Trier-Commission, which was founded in 1926. The memorandum “Save the archaeological heritage of Trier” guides the conservation measures undertaken by the owners of the properties. It is presented by an advisory board, the Trier-Commission, which is continuously monitoring the Roman monuments. A Management Plan will be put up in the near future and will consist of a set of maintenance and conservation measures to ensure the further protection of the property, the sustainable use and the interpretation to the public.