Khami, which developed after the capital of Great Zimbabwe had been abandoned in the mid-16th century, is of great archaeological interest. The discovery of objects from Europe and China shows that Khami was a major centre for trade over a long period of time. 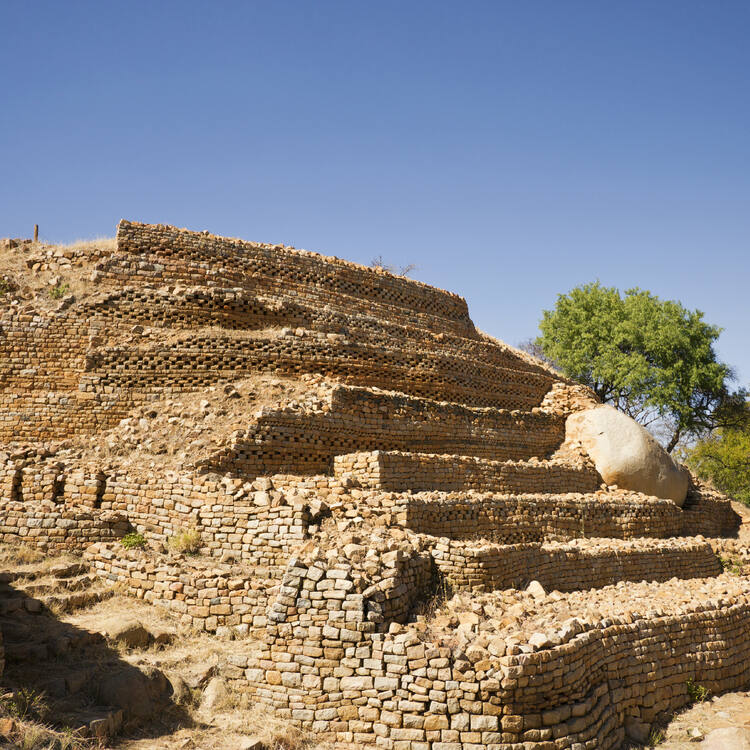 Khami Ruins National Monument is located to the west of the Khami River, 22 km from the City of Bulawayo. The property, located on a 1300 m hilltop downstream from a dam built during 1928-1929, covers an area of about 108 ha, spread over a distance of about 2 km from the Passage Ruin to the North Ruin.

The property was the capital of the Torwa dynasty, which arose from the collapse of the Great Zimbabwe Kingdom between 1450 -1650 and was abandoned during the Ndebele incursions of the 19th century. It is composed of a complex series of platforms of dry-stone walled structures, emulating a later development of Stone Age culture. The chief’s residence (Mambo) was located towards the north on the Hill Ruin site with its adjacent cultivation terraces. The population lived in daga huts of cobwork, surrounded by a series of granite walls. These structures display a high standard of workmanship, a great number of narrow passageways and perambulatory galleries and impressive chevron and chequered wall decorations. Khami conforms to Great Zimbabwe in a number of archaeological and architectural aspects but it possesses certain features particular to itself and its successors such as Danangombe and Zinjanja. Revetments or retaining walls found expression for the first time in the architectural history of the sub-region at Khami, and with it were elaborate decorations; it still has the longest decorated wall in the entire sub-region.

The architecture of the site and the archaeological artefacts provide evidence for an exceptional understanding of strong, united, early civilizations. They also offer information on the property’s complex socio-economic, religious and spiritual significance for the local communities and for the overall chronological development of Zimbabwe tradition; initiated in Mapungubwe (South Africa), extending to Great Zimbabwe, and through the emergence of later states. The archaeological remains are also a testament to long-distance historic trade links with the Portuguese, and the wider world, the diverse range of imported artefacts provide evidence of 15th and 17th century Spanish porcelain, Rhineland stoneware and Ming porcelain, many of which are on display in the Museum of Natural History in Bulawayo. There is also a monumental granite cross which illustrates the contact with missionaries at a traditionally revered and sacred spiritual site.

Khami is the second largest stone built monument in Zimbabwe. Its historical importance lies in its position at the watershed between the history of Great Zimbabwe and the later Zimbabwe period. It is one of the few Zimbabwe sites that were not destroyed by treasure hunters and its undisturbed stratigraphy is scientifically important in providing a much clearer insight into the history of the country. The climate supports a natural vegetation of open woodland, dominated by Combretum and Terminalia trees. Being close to the Kalahari Desert, the area is also vulnerable to droughts, and rainfall tends to vary considerably. The property has suffered some degradation due to variations in temperature, ground water, tourism, encroaching vegetation and applied preservation techniques.

Criterion (iii): The property is a unique and exceptional testimony to a civilization which has disappeared.The architecture and archaeological artefacts of the site provide important scientific and historical evidence critical for the understanding of the full chronological development of the Zimbabwe tradition from the Stone Age to the Iron Age era.

Criterion (iv):The property is an outstanding example of a type of building and architectural ensemble which illustrates a significant stage in history. It has yielded an exceptional long evidence related to human evolution and human environment dynamics, collectively extending from 100 000 years ago to date and demonstrates testimonial to the long distance trade with the outer world.

Over its area of 108 ha, the property is relatively intact and appropriately maintains the diverse cultural and traditional processes, functions and interactions of the local communities. Dispersed over 2 km, extending from the Passage Ruin to the North Ruin, an appropriate degree of indigenous cultural processes remain for the property to be sufficiently well protected from environmental pressures and alternative land uses. The boundaries are also sufficient in size to fully capture the natural and aesthetic values. In addition to the established boundaries, the property has a buffer zone to retain the natural characteristics of the area. However, some negative effects on the relationship between the site and its setting are being caused by the expansion of the suburbs of Bulawayo (10 km distant), and the polluting discharge from the city’s effluent into the Khami River. The buffer zone needs to be carefully monitored so that this relationship does not erode any further.

The ruins have been subjected to some natural erosion, veld fires, burrowing animals, encroaching vegetation, and the effects of tourism. Rain induced ground creepage down the site slopes has increased the incidence of wall cracks, bulges and collapses, adding to the deterioration of the structures, ornamental features and architectural coherence. Conservation and maintenance actions are needed to maintain the existing integrity of the historic fabric.

The authenticity of the historic evidence is unquestionable. The ruins generally follow the pattern and style of the Great Zimbabwe ruins but are considered to be a later development of that culture. It remains an undisturbed, non-functional, archaeological site whilst also still being used by contemporary communities for spiritual purposes. The dry-stone building traditions enhance the sacredness of the area, where human presence is traceable over 100,000 years. Acknowledging huts made of cobwork (daga) enhanced by decorative friezes, and surrounded by a series of granite walls, and with a great number of passage ways and uncovered perambulatory galleries, the current population maintains the historic traditions of the site.

Khami has retained its authenticity largely in part due to the minimal interventions that have been carried out. All restorations have used traditional methods and no new materials have been added. Restorations nowadays are by anastylosis which ensures that no new materials are introduced to the fabric of the site and promotes use of traditional methods of construction.

The archaeological zone was protected as a ‘Royal Reserve’ until the death of King Lobengule in 1893. In recognition of the historic, cultural and architectural significance of the site, it was scheduled as a National Monument in 1937. Currently the National Museums and Monuments Act Cap. 25:11 legally protect the property and its resources.

Khami Ruins National Monument is managed by National Museums and Monuments as overall responsible Agency. At local level Khami falls under the Western Region administrative unit and a project manager, who liaises with the Regional Director and Executive Director on administrative and policy issues and is responsible for conservation and development.

The government of Zimbabwe partly funds conservation work and also makes available funds for capital improvements through its Public Sector Investment Programme (PSIP). National Museums and Monuments provide some funds raised through entrance fees, filming fees, etc. for conservation. International cooperation has existed for financial support, including assistance for the development of a conservation and site management plan.

A management plan, which derives from a master plan for resource conservation and development, exists and is currently being implemented in accordance with National Museums and Monuments Act. However, there are challenges for implementation because the community was not adequately involved in the nomination of the property and, therefore, do not fully understand the implications of its status. The management plan needs to be periodically updated to respond to new conditions as they arise.

Although the well-defined and buffered boundary is not physically marked, a system of regular monitoring is in place but there are challenges in enforcing restrictions to regulate further developments, particularly from tourism development, and to maintain the conditions of integrity. Larger cooperation is needed to ensure the adequate management of the buffer zone and the conservation of its characteristics.

A regular and well resourced conservation programme is required to maintain stone walls and landforms and to address factors that contribute to deterioration, such as water infiltration and pollution. An appropriate visitor use strategy, including the development of facilities, is needed to regulate visitation at the site and to adequately present and interpret its significance.