Discovered in 1982 near the village of Sveshtari, this 3rd-century BC Thracian tomb reflects the fundamental structural principles of Thracian cult buildings. The tomb has a unique architectural decor, with polychrome half-human, half-plant caryatids and painted murals. The 10 female figures carved in high relief on the walls of the central chamber and the decoration of the lunette in its vault are the only examples of this type found so far in the Thracian lands. It is a remarkable reminder of the culture of the Getes, a Thracian people who were in contact with the Hellenistic and Hyperborean worlds, according to ancient geographers. 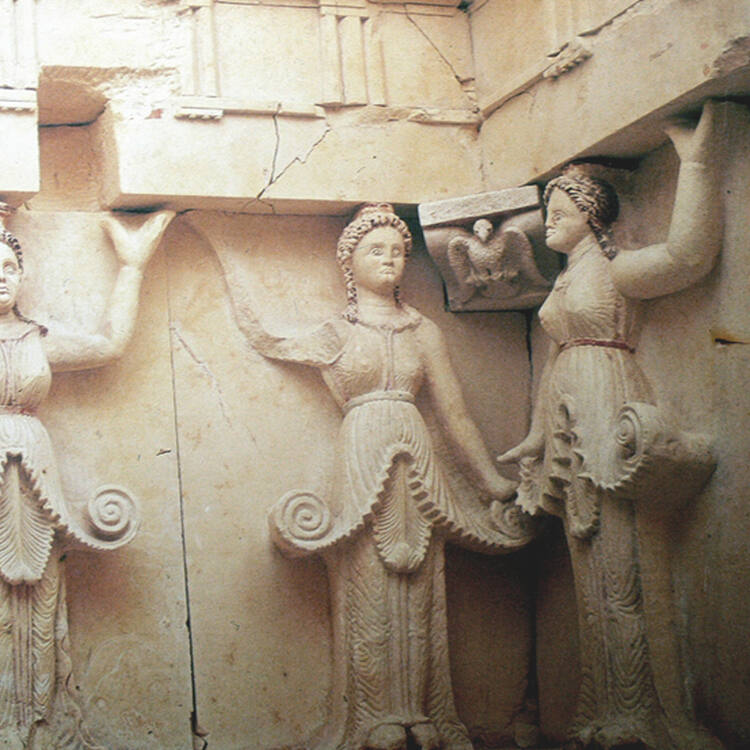 The Thracian Tomb near Sveshtari is an extremely rare and very well preserved monument of the sepulchral architecture containing remarkable elements in terms of their quality and style sculpture and painting. The Tomb is also remarkable for the fact that it represents local art, inspired by Hellenism, a rare case of an interrupted creative process which possesses specific characteristics.

Criterion (i): The Thracian Tomb near Sveshtari is a unique artistic achievement with its half human, half vegetable caryatids enclosed in a chiton in the shape of an upside down palmette. The fact the original polychromy has been preserved with its ochre, brown, blue, red and lilac shades adds to the bewitching charm of an expressive composition where the anthropomorphic supports conjure up the image of a choir of mourners frozen in the abstract positions of a ritual dance.

Criterion (iii): The tomb is exceptional testimony to the culture of the Getes, Thracian peoples living in the north of Hemus (contemporary Stara Planina), in contact with the Greek and Hyperborean worlds according to the ancient geographers. The Tomb is also remarkable for the fact that it represents local art inspired by Hellenism, a rare case of an interrupted creative process, which possesses specific characteristics. This monument is unique in its architectural décor and in the specific character of the funeral rites revealed by the excavation.

The integrity of the site is consistent with its unchanged character, and the surrounding area. The monument is located within the archaeological reserve "Sborianovo", where more than 40 Thracian sepulchral mounds, various sanctuaries, ancient and medieval villages, buildings, a fortress, mausoleum and a minaret from the ottoman period, exist. The property encompasses within its boundaries all the components necessary to convey its Outstanding Universal Value.

The Property retains its authenticity, being preserved in its original location by a moisture-isolating protective shell when the external sepulchral mound was reinstated. The enclosing embankment also emerges as a unique element in the surrounding landscape. The general condition of the original stone figures and pictorial elements of the construction is good, and the spatial organization of the Tomb is retained unaltered. The conservation work has been completed with minimal and discrete interference. The Tomb is open for visitors whilst meeting technical conservation requirements.

The management is implemented under:

- Cultural Heritage Law (Official Gazette No.19 of 2009) andsubdelegatedlegislation. This law regulates the research, studying, protection and promotion of the immovable cultural heritage in Bulgaria, and the development of Conservation and Management plans for its inscribed World Heritage List of immovable cultural properties.

- The Spatial Planning Act - (Official Gazette, No.1 of 2001 with amendments) and subdelegated legislation relates to spatial and urban planning, investment projects and buildings in Bulgaria. It also determines particular territorial and spatial protection, and the territories of cultural heritage.