The archaeological site of Chavin gave its name to the culture that developed between 1500 and 300 B.C. in this high valley of the Peruvian Andes. This former place of worship is one of the earliest and best-known pre-Columbian sites. Its appearance is striking, with the complex of terraces and squares, surrounded by structures of dressed stone, and the mainly zoomorphic ornamentation. 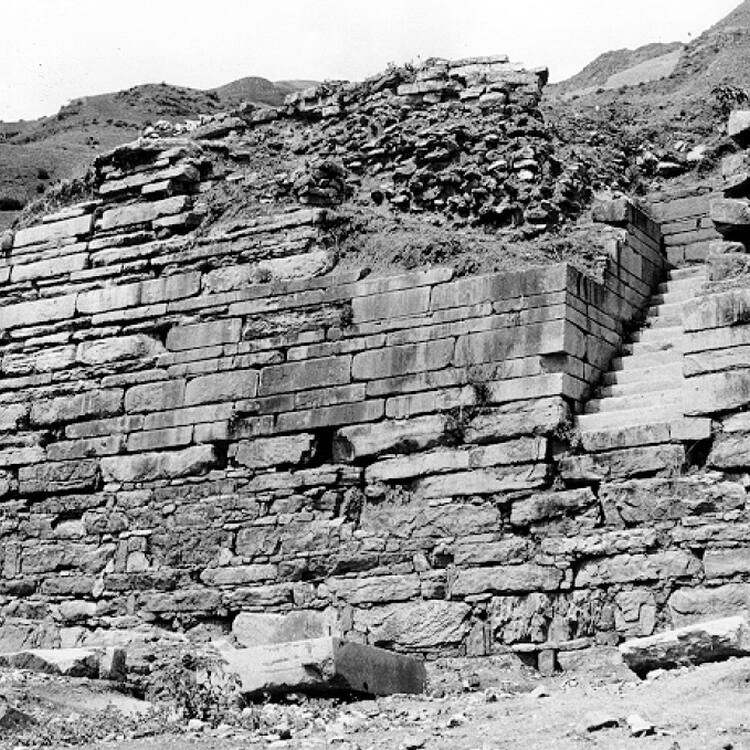 The archaeological site of Chavin gave its name to the culture that developed between the 15th and the 5th century BC in this high valley of the Peruvian Andes, in the province of Huari, department of Ancash. Chavin was a ceremonial and pilgrimage centre for the Andean religious world and hosted people from different latitudes, distances and languages, becoming an important centre of ideological, cultural and religious convergence and dissemination around a cult spread over a wide territory of the Andes, as far as the north, central and south coasts, the northern highlands and high jungle of Peru.

Chavin is one of the earliest and best known pre-Columbian sites and represents the more important expression of the arts and decorative and construction techniques of its time. The ceremonial and cultural nature of the site is evident in its architectural, technological and symbolic creation, which is characterized by coated quarried stone buildings and artificial terraces around plazas, containing an internal gallery system with an intricate network of vents and drains unprecedented in South America. The buildings and plazas were decorated with lush anthropomorphic and zoomorphic symbolic iconography of extraordinary aesthetic synthesis, carved in bas-relief on tombstones, columns, beams and monolithic stone sculptures. The Chavin Lanzón, the Raimondi Stela, the Tello Obelisk, the Falconidae Portico, the Circular Plaza and the tenon heads, among others, are evidence of the outstanding and monumental Chavin lithic art. All of these features make the archaeological site a unique monument of universal significance.

Criterion (iii): The Chavin Archaeological Site, eponym of one of the ancient civilizations of South America, is an exceptional example of the architectural, technological and symbolic creations of the early pre-Columbian societies in the Peruvian Andes. Its appearance is breath-taking, with a series of terraces and squares, with a complex system of internal galleries, and decorated with anthropomorphic and zoomorphic iconographic elements of extraordinary beauty. It was an important centre of ideological, cultural and religious convergence and dissemination around a cult spread over a wide territory of the Andes.

The boundaries of the inscribed property, 14.79 ha, contain all the elements, characteristics, and structural and symbolic key values of the architectural complex and of its historic evolution which convey its Outstanding Universal Value. Although the site has historically been affected by natural and anthropogenic phenomena, the wholeness of the complex made up by the buildings, platforms and plazas, the planimetry, its architectural design, the original shapes and materials of its different construction stages are still preserved; structures, galleries, plazas and architectural spaces still hold original elements and characteristics, including iconography, revealing its original use and function.

The wholeness and visual integrity of the Chavin Archaeological Site and its landscape has not undergone substantial changes, which is shown in the continuation of traditional agricultural activities in the surrounding areas. Environmental agents are the most relevant factor affecting the preservation of the integrity of the Chavin archaeological site, which have deteriorated its structures through time, including some landslides in the galleries, drains and internal vents. The most important are the floods caused by unexpected landslides and floods from glacial lakes (for example, the 1945 flood that partially buried the site), and earthquakes of high magnitude and intensity (such as the 1970 earthquake).

The conditions of authenticity of the Chavin Archaeological Site, including land planning and its architectural conception, shapes, materials and iconographic design have been maintained

The existing elements at the site are witnesses of the outstanding design, development and aesthetic lithic art synthesis of the tombstones, beams, columns, sculptures and others that remain in situ, and show its religious ideological connotations, the symbolism and ritual meaning of the compound, and the ceremonial use and function of spaces and architectural areas in particular. They also depict Chavin’s society and the process of historic evolution that reveal different construction stages and cultural contexts, because of the site’s continuous social functions that finally shaped its buildings. The material findings also reveal the function of the ceremonial centre as a place of pilgrimage by northern and central Peru populations in relation to cult clearly visible in its architectural iconography and in the religious paraphernalia found in the site. Archaeological investigations and conservation interventions carried out in the site have kept the spaces and structures of the ceremonial compound unchanged.

After the flood that partially buried Chavin in 1945, protection, cleaning, preventive preservation, research and preparation works have been carried out with the participation of several institutions and the Ministry of Culture.

According to national regulation, the management and protection of the Chavin Archaeological Site is the responsibility of the Ministry of Culture on behalf of the Peruvian Government.

The Ministry of Culture had being developed a management plan where the necessary items to meet basic needs and develop permanent projects required for protecting, preserving and restoring the site under the framework of institutional operation schemes has being scheduled. In addition, research and preservation activities are supported by private institutions.

The Chavin Archaeological Site has permanent personnel; however, allocated resources are insufficient for the preservation works to be carried out at the site.