Situated in the suburbs of Bagerhat, at the meeting-point of the Ganges and Brahmaputra rivers, this ancient city, formerly known as Khalifatabad, was founded by the Turkish general Ulugh Khan Jahan in the 15th century. The city’s infrastructure reveals considerable technical skill and an exceptional number of mosques and early Islamic monuments, many built of brick, can be seen there. 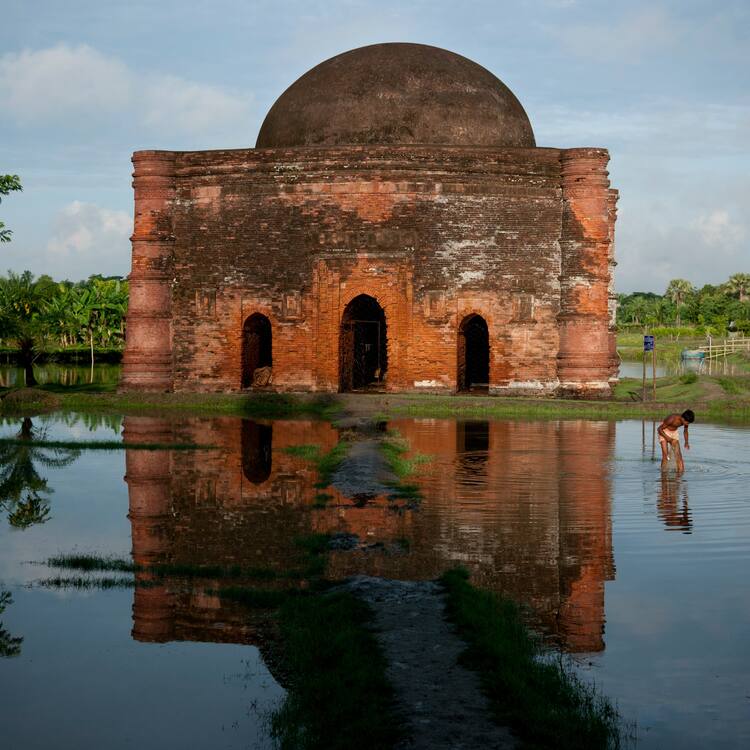 The magnificent city, which extended for 50 km2, contains some of the most significant buildings of the initial period of the development of Muslim architecture of Bengal. They include 360 mosques, public buildings, mausoleums, bridges, roads, water tanks and other public buildings constructed from baked brick.

This old city, created within a few years and covered up by the jungle after the death of its founder in 1459, is striking because of certain uncommon features. The density of Islamic religious monuments is explained by the piety of Khan Jahan, which is evidenced by the engraved inscription on his tomb. The lack of fortifications is attributable to the possibilities of retreat into the impenetrable mangrove swamps of the Sunderbans. The quality of the infrastructures - the supply and evacuation of water, the cisterns and reservoirs, the roads and bridges - all reveal a perfect mastery of the techniques of planning and a will towards spatial organization.

The monuments, which have been partially disengaged from the vegetation, may be divided into two principal zones 6.5 km apart: to the West, around the mosque of Shait-Gumbad and to the East, around the mausoleum of Khan Jahan. More than 50 monuments have been catalogued: in the first group, the mosques of Singar, Bibi Begni and Clumakkola; and in the second, the mosques of Reza Khoda, Zindavir and Ranvijoypur.

Criterion (iv): The Historic Mosque City of Bagerhatrepresents the vestiges of a medieval Muslim town in the northern peripheral land of the Sundarbans. It contains some of the most significant buildings of the initial period of the development of Muslim architecture in Bengal. Shait-Gumbad is one of the largest mosques and represents the flavour of the traditional orthodox mosque plan and it is the only example of its kind in the whole of Bengal. The second important monument, Khan Jahan's tomb, is an extraordinary representation of this type of architecture as well as calligraphic parlance.

The site exhibits a unique architectural style, known as Khan-e-Jahan (15th Century A.D.), which is the only known example in the history of architecture.

The original picturesque location and the natural setting of these densely located religious and secular monuments along with the medieval form and design are intact. The property of the Historic Mosque City of Bagerhat contains and preserves all the necessary elements which include not only mosques but also residences, roads, ancient ponds, tombs, chillakhana (ancient graveyard). Therefore, the attributes of the city are still preserved.

The threat of the unauthorized activities by the community and the extreme salinity of the soil and atmosphere, which can potentially threaten the physical integrity of the attributes, are being closely monitored by the site managers. In particular, interventions are needed to preserve the Shaitgumbad Mosque.

In order to preserve the authenticity of the monuments, conservation and restoration actions have respected the use of original materials (lime and mortar). Notwithstanding,  some of the original features, such as stone pillars inside the mosques, reticulated windows, pediment, upper band of cornice, were lost in earlier interventions.

Many of the structures continue to be in religious and secular use contributing to the social and communal harmony by the way of retaining the original features of traditional practices.

The Department of Archaeology ensures that inappropriate activities which may affect the Outstanding Universal Value of property such as buildings or infrastructure cannot be constructed within or close to the property, and no one can alter or deface monuments within the property.

The Government of Bangladesh has worked on the implementation of recommendations set out in the Master plan prepared by UNESCO 1973/74-1977/78 for the conservation and presentation of the Historic Mosque City of Bagerhat. Though the financial efforts have been made to address the conservation problem derived from salinity, this has not been comprehensively solved and deterioration has continued. The implementation of the management plan, including conservation provisions, will need to be monitored so as to evaluate achieved results and provide new action plans in response to emerging conditions.

Conservation of the historic landscape, buffer zone and the property has yet to be addressed. A number of issues have recently been identified and will constitute the basis for a new project named “South Asia Tourism Infrastructure Development Project” (Bangladesh Portion), which is going to be shortly implemented. Challenges to sustainably manage these concerns, along with the conservation of the property, will need to be taken up to ensure the long term preservation and protection of its Outstanding Universal Value.

1995
top
Forgot your username or password?
Become a member