As the first capital of Brazil, from 1549 to 1763, Salvador de Bahia witnessed the blending of European, African and Amerindian cultures. It was also, from 1558, the first slave market in the New World, with slaves arriving to work on the sugar plantations. The city has managed to preserve many outstanding Renaissance buildings. A special feature of the old town are the brightly coloured houses, often decorated with fine stucco-work. 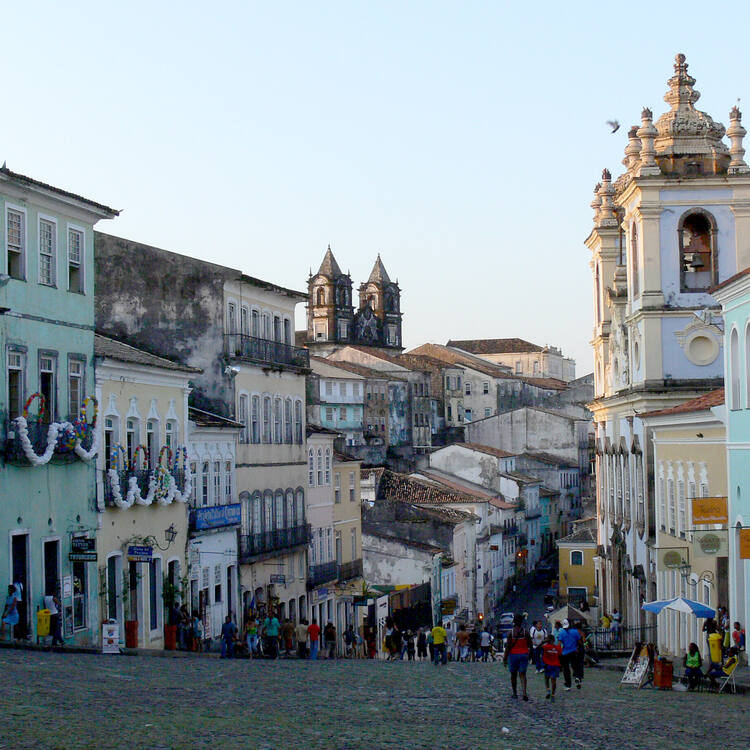 Founded in 1549 on a small peninsula that separates Todos os Santos Bay from the Atlantic Ocean on the northeast coast of Brazil, Salvador de Bahia became Portuguese America’s first capital and remained so until 1763. Its founding and historic role as colonial capital associate it with the theme of world exploration. Salvador de Bahia’s historic centre – an eminent example of Renaissance urban structuring adapted to a colonial site – is the Cidade Alta (Upper Town), a defensive, administrative and residential neighbourhood perched atop an 85-m-high escarpment. This densely built colonial city par excellence of the Brazilian northeast is distinguished by its religious, civil and military colonial architecture dating from the 17th to the 19th centuries. Salvador de Bahia is also notable as one of the major points of convergence of European, African and American Indian cultures of the 16th to 18th centuries.

The settlement of Salvador de Bahia, strategically situated overlooking an immense bay on the Brazilian coast, was aimed at centralising the activities of the metropolis in Portuguese America and facilitating trade with Africa and the Far East. The city grew quickly, becoming Brazil’s main seaport and an important centre of the sugar industry and the slave trade. The historic centre’s main districts are Sé, Pelourinho, Misericórdia, São Bento, Taboão, Carmo and Santo Antônio. Pelourinho is characterized by its fidelity to the 16th-century plan, the density of its monuments and the homogeneity of its construction. In addition to major buildings dating to the 17th and 18th centuries such as the Catedral Basílica de Salvador and the churches and convents of São Francisco, São Domingos, Carmo and Santo Antônio, the Historic Centre of Salvador de Bahia retains a number of 16th-century public spaces, including the Municipal Plaza, the Largo Terreiro de Jesus and the Largo de São Francisco, as well as baroque palaces, among them the Palácio do Arcebispado, Palácio Saldanha and Palácio Ferrão. There are many streets lined with brightly coloured houses, often decorated with fine stucco-work, that are characteristic of the colonial city. Salvador de Bahia was also, from 1558, the first slave market in the New World, with slaves arriving to work on the sugar plantations. Echoes of this multicultural past survive to the present day in the historic centre’s rich tangible and intangible heritage.

Criterion (iv): Salvador de Bahia is an eminent example of Renaissance urban structuring adapted to a colonial site having an upper city of a defensive, administrative and residential nature which overlooks the lower city where commercial activities revolve around the port. The density of monuments, with Ouro Preto (included on the World Heritage List in 1980), makes it the colonial city par excellence in the Brazilian northeast.

Criterion (vi): Salvador de Bahia is one of the major points of convergence of European, African and American Indian cultures of the 16th to 18th centuries. Its founding and historic role as capital of Brazil quite naturally associate it with the theme of world exploration already illustrated by the inclusion on the World Heritage List of the Old Havana (1982), Angra do Heroismo (1983), San Juan de Puerto Rico (1983), and Cartagena (1984).

Within the boundaries of the Historic Centre of Salvador de Bahia are located all the elements necessary to express its Outstanding Universal Value, including the escarpment that divides it into Upper and Lower towns; the Pelourinho district’s underlying 16th-century urban plan; and the web of streets with rows of uniform houses interwoven with notable examples of religious, administrative, military and commercial and monumental architecture dating from the 17th to the 19th centuries. The city’s 78.28-ha historic centre is of sufficient size to adequately ensure the complete representation of the features and processes that convey the property’s significance. The Historic Centre of Salvador de Bahia does not suffer from adverse effects of development and/or neglect. Nevertheless, the greater city’s population has grown quickly since 1966 due to the region’s industrial development, resulting in the historic centre becoming enclosed on three sides by a very dense urban zone.

The Historic Centre of Salvador de Bahia has a high degree of authenticity in terms of location and setting, forms and designs, and materials and substances. In the 1990s, some 1,350 properties were restored in the Pelourinho district with the objective of developing the economic potential of the area by exploiting tourism. Concurrently, the number of residents in the historic centre decreased from 9,853 in 1980 to 3,235 in 2000 in a process of depopulation.

The Historic Centre of Salvador de Bahia is protected by laws enacted by the three levels of government: Decree-Law 25/1937, implemented by the federal government through the Instituto do Patrimônio Histórico e Artístico Nacional (National Institute of Historical and Artistic Heritage – IPHAN); Law 3660/1978, passed by the Bahia state government through the Instituto do Patrimônio Artístico e Cultural da Bahia (Artistic and Cultural Institute of Bahia – IPAC); and Municipal Law 3289/1983, setting forth Specific Municipal Legislation for the Protection of Cultural Property, through which a protection area encompassing the IPHAN-designated cultural site is established and joint reviews by the three levels of government of all proposed projects within the protected zone are required. The 2008 Plano Diretor Urbano de Salvador (Urban Master Plan for Slavador – PDDU) formally certifies the existing federally designated heritage areas and those covered under the Specific Municipal Legislation statute (Law 3289/1983). In addition, the Escritório Técnico de Licenciamento e Fiscalização (Technical Licensing and Oversight Office – ETELF) was created to facilitate the implementation of concerted and coordinated measures and oversight by the three levels of government in the Historic Centre of Salvador de Bahia, with a view to enhancing integration in this area.

The 2010 Plano de Reabilitação Participativo do Centro Antigo de Salvador (Participatory Rehabilitation Plan for the Old Centre of Salvador) aims to address the economic, social, environmental and urbanistic issues that were inadequately addressed in the rehabilitation programmes undertaken from the 1960s to the 1990s, which invariably centred on proposed increases in tourism and other tertiary activities in the Pelourinho district, draining the historic centre of its key management, administrative and business functions and leading to a progressive population exodus and a corresponding deterioration of the urban landscape.

Sustaining the Outstanding Universal Value of the property over time will require continuing the integrated efforts to revitalize the area and reverse the process of urban decay; advancing residential revitalization of the historic centre to counteract the progressive population exodus and to sustain the area as a living organism within the urban landscape; and establishing monitoring indicators for these and any future interventions, to ensure that such interventions do not have a negative impact on the Outstanding Universal Value, authenticity and integrity of the property.