Yosemite National Park lies in the heart of California. With its 'hanging' valleys, many waterfalls, cirque lakes, polished domes, moraines and U-shaped valleys, it provides an excellent overview of all kinds of granite relief fashioned by glaciation. At 600–4,000 m, a great variety of flora and fauna can also be found here. 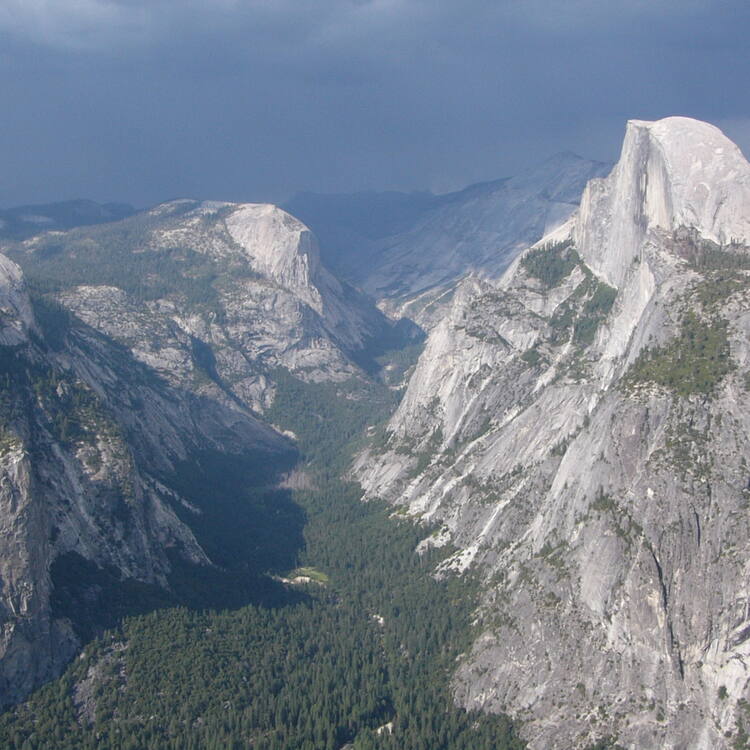 Yosemite National Park vividly illustrates the effects of glacial erosion of granitic bedrock, creating geologic features that are unique in the world. Repeated glaciations over millions of years have resulted in a concentration of distinctive landscape features, including soaring cliffs, domes, and free-falling waterfalls. There is exceptional glaciated topography, including the spectacular Yosemite Valley, a 1 kilometer (1/2 mile) deep, glacier-carved cleft with massive sheer granite walls. These geologic features provide a scenic backdrop for mountain meadows and giant sequoia groves, resulting in a diverse landscape of exceptional natural and scenic beauty.

Criterion (viii): Glacial action combined with the granitic bedrock has produced unique and pronounced landform features including distinctive polished dome structures, as well as hanging valleys, tarns, moraines and U-shaped valleys. Granitic landforms such as Half Dome and the vertical walls of El Capitan are classic distinctive reflections of geologic history. No other area portrays the effects of glaciation on underlying granitic domes as well as Yosemite does.

The property consists of over 300,000 hectares, one of the largest and least fragmented areas in California’s Sierra Nevada mountain range. Approximately 95% of the park is designated wilderness. The entire park is surrounded by four national forests, several adjacent portions of which are designated wilderness areas, thereby providing connectivity with the larger landscape. However, there are concerns about increasing development outside park boundaries.

There are no significant threats to the property’s geologic or geomorphological values.  Visitation numbers, while high in certain areas, are largely restricted to the small portion of the park that has been developed, though preventing overcrowding in developed areas is an ongoing concern.

Threats to park resources and the integrity of park ecosystems include loss of natural fire as a process, air pollutants and air-borne contaminants, global climate change, direct impacts to resources from high visitation in some areas of the park such as human-wildlife conflicts, habitat fragmentation from both outside and inside park boundaries, and the invasion of non-native plant and animal species. The park is actively attempting to control the non-native plant species that pose the most serious threat, such as yellow star-thistle, bull thistle, and Himalayan blackberry. The presence of wild turkeys, bullfrogs, introduced fish and other non-native animal species in Yosemite threaten the park's native species including such rare species as the Sierra Nevada yellow legged frog.

Park management plans for the property have identified a number of resource protection measures, such as environmental assessment processes, zoning, ecological integrity and visitor monitoring, and education programs to address pressures arising from issues both inside and outside the property.

Designated by the U.S. Congress in 1890 as a national park, Yosemite National Park is managed under the authority of the Organic Act of August 25, 1916 which established the United States National Park Service. In addition, the park has specific enabling legislation which provides broad congressional direction regarding the primary purposes of the park. Numerous other federal laws bring additional layers of protection to the park and its resources. Day to day management is directed by the Park Superintendent.

Management goals and objectives for the property have been developed through a General Management Plan, which has been supplemented in recent years with more site-specific planning exercises as well as numerous plans for specific issues and resources. In addition, the National Park Service has established Management Policies which provide broader direction for all National Park Service units, including Yosemite.

The national park has a large and well-trained staff and works closely with other land and water management agencies in the larger Sierra Nevada region to protect shared resources. One example is the California Landscape Conservation Cooperative, which brings together science and resource management to inform climate adaptation strategies to address climate change and other stressors within this ecological region.

Long-term protection and effective management of the site from potential threats requires continued monitoring of resource conditions, such as through the NPS Inventory and Monitoring (I&M) program. The Sierra Nevada I&M network, of which Yosemite is a part, has developed  several “vital signs” to track a subset of physical, chemical and biological elements and processes selected to represent the overall health or condition of park resources. In Yosemite, these vital signs include bird populations, weather and climate, water chemistry, plant communities, fire regimes and others.

Yosemite is the sacred ancestral homelands of several traditionally-associated American Indian tribes and groups. The landscape reflects generations of American Indian land management, attesting to their deep ecological, cultural and spiritual ties to the area. Traditional cultural practices continue today and the ceremonies, and spiritual and traditional practices are critically important in retaining the sacred nature of Yosemite and its native culture.