Made in Paris by the French sculptor Bartholdi, in collaboration with Gustave Eiffel (who was responsible for the steel framework), this towering monument to liberty was a gift from France on the centenary of American independence. Inaugurated in 1886, the sculpture stands at the entrance to New York Harbour and has welcomed millions of immigrants to the United States ever since. 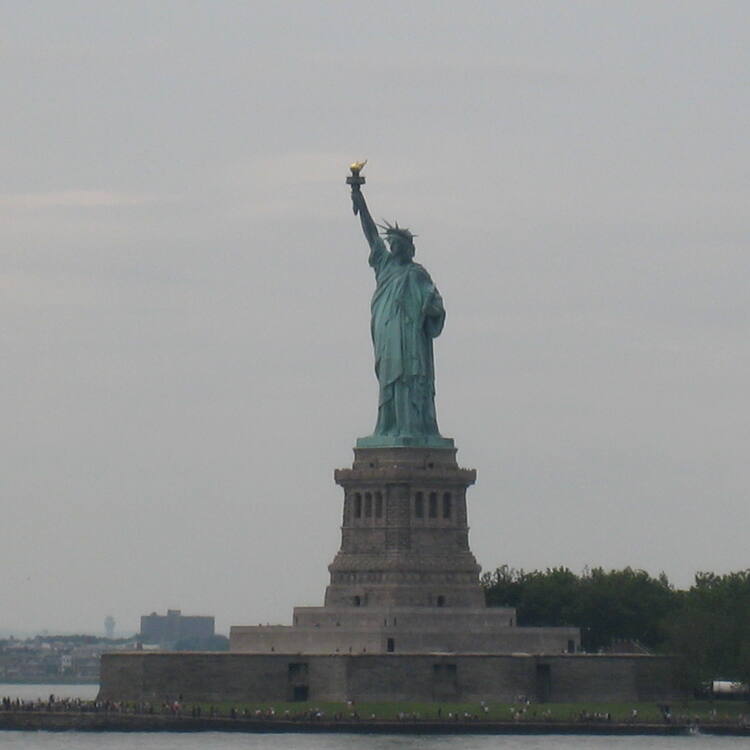 The Statue of Liberty, a hollow colossus composed of thinly pounded copper sheets over a steel framework, stands on an island at the entrance to New York Harbor. It was designed by sculptor Frédéric Bartholdi in collaboration with engineer Gustave Eiffel, and was a gift from France on the centenary of American independence in 1876. Its design and construction were recognized at the time as one of the greatest technical achievements of the 19th century and hailed as a bridge between art and engineering. Atop its pedestal (designed by American architect Richard Morris Hunt), the Statue has welcomed millions of immigrants to the United States since it was dedicated in 1886.

The Statue is a masterpiece of colossal statuary, which found renewed expression in the 19th century, after the tradition of those of antiquity, but with intimations of Art Nouveau. Drawing on classical elements and iconography, it expressed modern aspirations. The interior iron framework is a formidable and intricate piece of construction, a harbinger of the future in engineering, architecture, and art, including the extensive use of concrete in the base, the flexible curtain-wall type of construction that supports the skin, and the use of electricity to light the torch. Édouard René de Laboulaye collaborated with Bartholdi for the concept of the Statue to embody international friendship, peace, and progress, and specifically the historical alliance between France and the United States. Its financing by international subscription was also significant. Highly potent symbolic elements of the design include the United States Declaration of Independence, which the Statue holds in her left hand, as well as the broken shackles from which she steps.

Criterion (i): This colossal statue is a masterpiece of the human spirit. The collaboration between the sculptor Frédéric Bartholdi and the engineer Gustave Eiffel resulted in the production of a technological wonder that brings together art and engineering in a new and powerful way.

Criterion (vi): The symbolic value of the Statue of Liberty lies in two basic factors. It was presented by France with the intention of affirming the historical alliance between the two nations. It was financed by international subscription in recognition of the establishment of the principles of freedom and democracy by the United States of America’s Declaration of Independence, which the Statue holds in her left hand. The Statue also soon became and has endured as a symbol of the migration of people from many countries into the United States in the late 19th and the early 20th centuries. She endures as a highly potent symbol – inspiring contemplation, debate, and protest – of ideals such as liberty, peace, human rights, abolition of slavery, democracy, and opportunity.

Within the boundaries of the property are located all the elements necessary to understand and express the Outstanding Universal Value of the Statue of Liberty. The Statue has been maintained through its lifetime with no major change. Deformations related to the galvanic interaction of metals were corrected in an extensive restoration undertaken for its centennial in 1986, which included reproducing the original deteriorated torch, which is now preserved in the museum. There have been periodic updates to the internal mechanical and security systems. The 5.95 ha property is of sufficient size to adequately ensure the complete representation of the features and processes that convey the property’s significance, and does not suffer from adverse effects of development and/or neglect. There is no official buffer zone for the property, but its island location within the urban setting provides equivalent protection. The property, which is the whole of Liberty Island, also houses a number of administrative structures.

The Statue of Liberty is authentic in terms of its location and setting, form and design, materials and substance, use and function, and spirit and feeling. The Statue’s design and purpose have been preserved from the time of its construction. The interior iron strapwork supporting the metal skin was replaced in 1986 with stainless steel that will prevent corrosion. All repairs were made with great fidelity to the original design and materials. Periodic mechanical, circulation, and security updates have not affected the sculptural and symbolic values of the monument, and have been done to ensure the safety of visitors. There is a formal monitoring program for the property. The known and potential threats to the authenticity of the property include pollution, severe weather, and large numbers of visitors.

The Statue of Liberty is owned by the Government of the United States of America. The Statue was designated as a National Monument in 1924 (the National Monument additionally includes Liberty Island [1937] and Ellis Island [1965]), and is administered by the National Park Service. These measures give it the highest possible level of protection. The existing General Management Plan (1982), which addresses physical preservation and interpretation, has been supplemented in recent years by a comprehensive study on life-safety and emergency management (2009), the recommendations of which have been implemented. The Statue receives a large number of visitors, and has substantial professional staff and facilities that include a Visitor Information Center, an exhibit on the Statue’s history, and the nearby Ellis Island Immigration Museum. Access is by ferry, which includes security screening of visitors; maintaining the security of the property is an ongoing concern.

Sustaining the Outstanding Universal Value of the property over time will require continuing to monitor and manage the known and potential threats, including pollution, severe weather, and large numbers of visitors.