The area exhibits a profusion of distinctive rock landforms rising above the granite shield that covers much of Zimbabwe. The large boulders provide abundant natural shelters and have been associated with human occupation from the early Stone Age right through to early historical times, and intermittently since. They also feature an outstanding collection of rock paintings. The Matobo Hills continue to provide a strong focus for the local community, which still uses shrines and sacred places closely linked to traditional, social and economic activities. 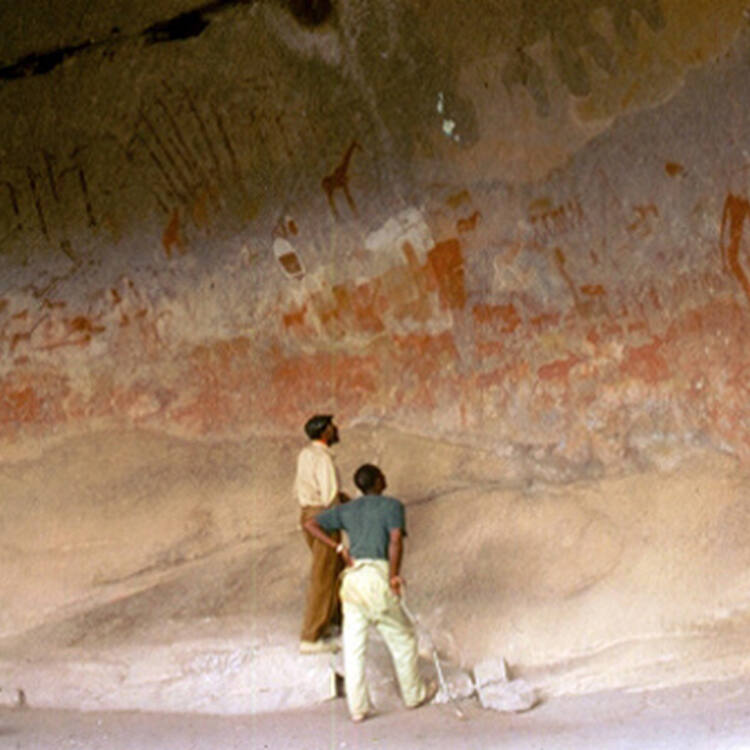 The Matobo Hills some 35 km south of Bulawayo are a profusion of distinctive granite landforms, densely packed into a comparatively tight area, that rise up to form a sea of hills. Their forms have resulted from the varied composition and alignment of the granite rocks, which responded differently to millions of years of weathering. These extraordinary granite rock formations have exerted a strong presence over the whole area – both in natural and cultural terms.

People have interacted with, and been inspired by, the dramatic natural rock formations of the Matobo Hills for over many millennia. This interaction has produced one of the most outstanding rock art collections in southern Africa; it has also fostered strong religious beliefs, which still play a major role in contemporary local society; and it demonstrates an almost uninterrupted association between man and his environment over the past 100,000 years.

The Matobo Hills have one of the highest concentrations of rock art in Southern Africa dating back at least 13,000 years. The paintings illustrate evolving artistic styles and also socio-religious beliefs. The whole bears testimony to a rich cultural tradition that has now disappeared. The rich evidence from archaeology and from the rock paintings at Matobo provides evidence that the Matobo Hills have been occupied over a period of at least 500,000 years. Furthermore, this evidence provides a very full picture of the lives of foraging societies in the Stone Age and the way agricultural societies eventually came to displace them in the Iron Age.

The Mwari religion which is still practiced in the area, and which may date back to the Iron Age, is the most powerful oracular tradition in southern Africa. The Matobo rocks are seen as the seat of god and of ancestral spirits. Sacred shrines within the hills are places where contact can be made with the spiritual world. The living traditions associated with the shrines represent one of the most powerful intangible traditions in southern Africa and one that could be said to be of universal significance. This is a community response to a landscape rather than individual ones. The natural qualities of Matobo, in terms of the power of the rocks and of the produce from the surrounding natural environment, thus have strong cultural associations.

Criterion (iii): The Matobo Hills have one of the highest concentrations of rock art in southern Africa. The rich evidence from archaeology and from the rock paintings at Matobo provide a very full picture of the lives of foraging societies in the Stone Age and the way agricultural societies came to replace them.

Criterion (v): The interaction between communities and the landscape, manifested in the rock art and also in the long-standing religious traditions still associated with the rocks, are community responses to a landscape.

Criterion (vi): The Mwari religion, centred on Matobo, which may date back to the Iron Age, is the most powerful oracular tradition in southern Africa.

In order to reflect a coherent landscape, encompassing not only the rock paintings and rock batholiths but also the strong social interaction between local people and these tangible aspects, the boundary encompasses the Rhodes Matopos National Park and two Rural District Councils of Matobo and Umzingwane. The boundary thus encompasses all the attributes of Outstanding Universal Value.

Overall the rock paintings are in a fairly good state of preservation. Natural weathering is the main agent of change and although this has made some of the paintings difficult to decipher, the process is part of the relationship between the images and their setting. Further slight damage is being wrought by visitors. In only one cave are the paintings badly compromised: at Pomongwe Cave, experiments were carried out in the 1920s with linseed oil as a preservative and this has darkened the images. The archaeological evidence appears to be well protected – both within those caves, where large-scale excavations have taken place, and elsewhere in caves that could produce further evidence.

Through a system of taboos and cultural norms that prohibit desecration, the long-standing intangible heritage of indigenous traditional religious beliefs and practices are still instrumental in the preservation of the tangible heritage. Around the two shrines, there are no artificial buildings, structures, walls or other traces of human presence, apart from a wooden palisade that demarcates the area beyond which people may not proceed without permission from the ancestral spirits who are consulted by the custodian and the elders. There are development pressure from the demand for amenities and facilities by visitors.  Increased population has had a negative impact on the natural environment.

The area is prone to droughts and floods and soil erosion is becoming a serious problem. There are also threats follows the introduction of exotic plants.

The authenticity of the hunter-gatherer and a few agriculturist rock paintings in the Matobo Hills area has been widely confirmed. The rock paintings survive in situ and are still linked to a landscape that reflects elements of the pastoral and agricultural traditions reflected in painted images.

The living traditions and intangible heritage associated with the site and which bind the cultural and natural values together are still thriving. The annual pilgrimage in August attracts more than a thousand pilgrims who gather around the natural features of the rocks and the adjacent terraces, where participants dance, perform rituals, eat and sleep during the 3-week long ceremonies.

A Management Committee, consisting of key stakeholders has been established. The property was guided by a five year Management Plan for the period 2005-2009. For technical expertise the committee relies on technical staff drawn from the major stakeholders. Other organizations and agencies involved in management include the Natural Resources Board and the Forestry Commission.

The Management Plan needs revising so that it is a live and relevant document that addresses the opportunities provided by inscription. The Plan also needs to support integrated management to achieve sustainable development, which respects both cultural and natural parameters of the cultural landscape, and fosters the integration of intangible heritage issues into management and interpretation. It also needs to address threats, such as from uncontrolled visitor access, soil erosion and invasive plants. There is also a need for conservation plans for key aspects of the site.